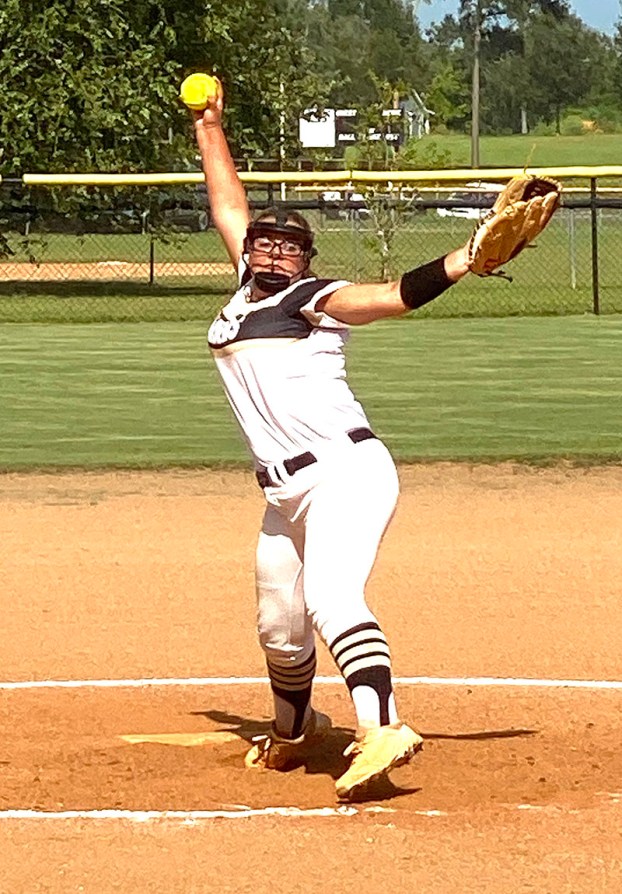 Southland Academy pitcher Sarah Beth Storey in action against Tiftarea Academy. Storey gave up just three runs in six innings of work to keep the Lady Raiders in the game and to give them a chance to pull an upset over the Lady Panthers. Photo by Ken Gustafson

Six-run seventh inning by Tiftarea too much for Lady Raiders

AMERICUS – Up until the top of the seventh inning, the Southland Academy Lady Raider softball team (SA) was hanging in with one of the top teams in the Georgia Independent School Association (GISA): Tiftarea Academy (TA). However, with the score tied at 3-3 going into the last inning, the Lady Panthers scored six runs on five hits to blow the game open and went on to win 9-3 on Thursday, September 3, at the Southland Academy softball complex.

Before TA’s six-run barrage in the seventh, the Lady Raiders were in contention to pull off a big win, but in the bottom of the fifth inning, TA Head Coach Rob Flick brought in his ace pitcher, McKenna McCard. From that point on, McCard, one of the best pitchers in the state at the GISA level, was almost unhittable, as she gave up no runs on two hits and struck out seven Lady Raiders the rest of the way.

With one out, Laura Ann Jones singled to right field and Elaine Mercer doubled to center field, putting runners on second and third for the Lady Panthers. Caroline Heard then grounded into a fielder’s choice, scoring Jones and giving TA a 4-3 lead. 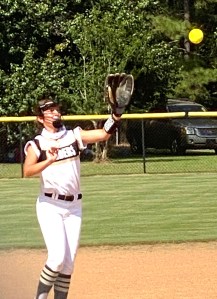 Southland Academy third baseman Landry Hart is about to catch a line drive. At the plate, Hart went 1 for 2 with a single and a run scored.
Photo by Ken Gustafson

Sarah Beth Royal followed that up with an RBI single and McCard’s sister, Pyper McCard, drove in two more runs on an RBI single, increasing TA’s lead to 7-3.

The Lady Panthers were still not done. While McCard was shutting down the SA offense, she showed her prowess at the plate by belting a two-run home run over the center field wall and completing TA’s six-run output.

The Lady Raiders did the best they could to try and muster some offense in the bottom of the seventh, but McCard retired Reese Roland, Brookland Weaver and Katie Rogers in order to end the game. 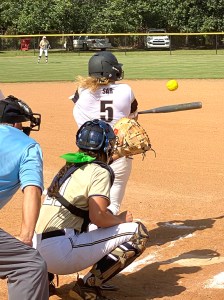 Sarah Beth Storey went 2 for 4 at the plate with a double, a single, two RBIs and a run scored to help lead the Lady Raiders offensively against Tiftarea Academy.
Photo by Ken Gustafson

In spite of the loss, SA Head Coach Rusty Tondee was still pleased with the effort that his squad put forth to try and beat TA. “I’m really proud of the effort our girls made,” said Tondee. “We’re playing one of the best teams in the GISA with a couple of the best players overall and we’re playing without three of our best players, so our girls gave a tremendous effort and I’m so proud of the way we played.”

Tondee was referring to Ali Dent, Morgan Weaver and Holly McCain, who are all out sick.

While he was pleased with his squad’s effort, Tondee knows that there are still some things that his team needs to correct.

“There are a few things that we need to correct and I’m pretty confident that we’ll do that and good things will happen.” 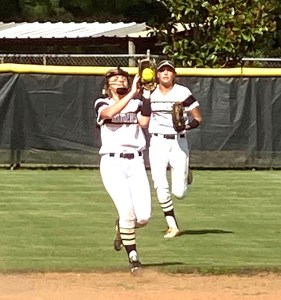 Southland Academy shortstop Samantha Wojnar makes a defensive play in the Lady Raiders’ game against Tiftarea Academy. Wojnar went 1 for 2 at the plate with a single.
Photo by Ken Gustafson

For Tondee and his squad, winning a region championship is not good enough and he wants his team to have that mindset. “Like I told the girls, unless you’re trying to win a banner to put in the gym, region really doesn’t matter,” said Tondee. “We’re playing with the power rankings and every game you play is just as important as a region game. We’re more focused on winning every game than trying to win what I think is a meaningless region game.”

In this game against TA, the Lady Raiders got off to a good start early. In the bottom of the first inning, Morgan Minnick led off the inning with a single and Storey drove Minick in on an RBI double off TA starting pitcher Pyper McCard.

The Lady Panthers responded in the top of the third with two runs on three hits, but the Lady Raiders counter punched with a run in the bottom of the third to tie the game at 2-2. 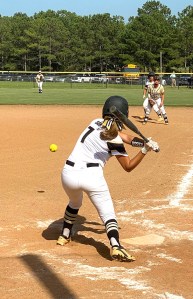 Each team scored a run in the fourth inning and the game remained tied until the seventh, when they Lady Panthers scored six runs to win the game.

Though she took the loss, for the first six innings of the game, Storey was able to hold the Lady Panthers in check, having given up three runs on 12 hits through six innings of work. In total, she gave up nine earned runs on 17 hits, walked one and struck out three batters.

“My drop ball was working pretty good,” said Storey. “I mean, I haven’t really thrown in a long time, so it’s different with some of our girls being out. We just kind of lost it in the last inning. We had some things happen that shouldn’t have happened, but it’s all good. We really played better than I could have asked.” 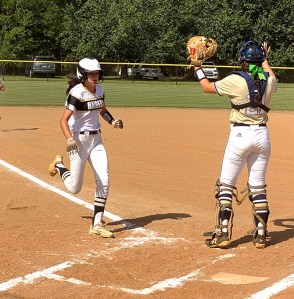 Southland Academy center fielder Morgan Minick scores the first run of the game on an RBI double by Sarah Beth Storey in the first inning against Tiftarea Academy.
Photo by Ken Gustafson

The Lady Panthers had several players earn multiple hits, but Jones had the most hits, as she went 3 for 4 with three singles, a run scored and two RBIs.

Pyper McCard started in the circle for TA and gave up three runs on six hits in four innings of work. She walked one batter and struck out four. McKenna McCard, who dominated the rest of the way by giving up no runs or hits and striking out seven, replaced her.

With the loss, the Lady Raiders drop to 4-5 on the season, while TA improves to 8-1.

Up next for the Lady Raiders is a home game against Southwest Georgia Academy on Thursday, September 10, at 4 p.m.