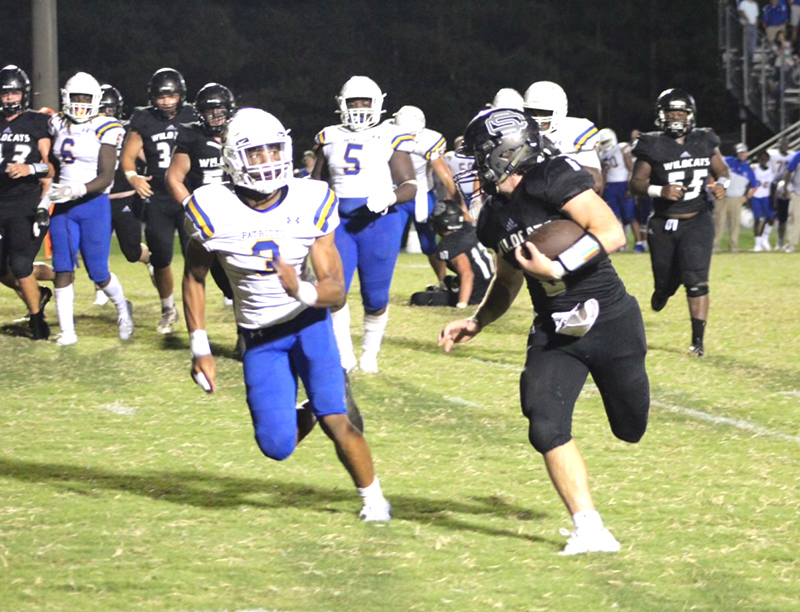 Schley County senior running back Luke Renfroe scored the winning touchdown from four yards out to help give the Wildcats a 20-19 victory over Wilcox County. Photo by Sheila DeVane

ELLAVILLE – Schley County (SCHS) senior running back Luke Renfroe was able to score a rushing touchdown from four yards out late in the fourth quarter to give the Wildcats a 20-19 come-from-behind victory over the Patriots of Wilcox County (WCHS) on Friday, September 18, at Schley County High School.

For SCHS Head Coach Darren Alford, the victory was a total team effort.

“I give all the credit to my players and coaches. I challenged them this week to work hard and learn the game plan,” said Alford. “They did that and other than a few mistakes here and there, they executed it well. I am impressed with how much they improved from week one until now.”

The Wildcats fell behind early when WCHS punt returner Matt McAdoo ran a punt back for a touchdown. The extra point was unsuccessful, but the Patriots had an early 6-0 lead.

The Wildcats would answer, however, as the SCHS offense was able to move the ball down to the WCHS 24-yard line. Then senior quarterback Jarrett Long broke through the Patriots’ defensive line and ran the ball 24 yards for the tying touchdown. The extra point by senior Aaron Pinckard was good and the Wildcats had a 7-6 lead with 3:45 remaining in the first half.

However, the Patriots struck back when quarterback Abe Stowe scored a rushing touchdown from six yards out. The extra point was unsuccessful, but the Patriots had taken a 12-7 lead by halftime. 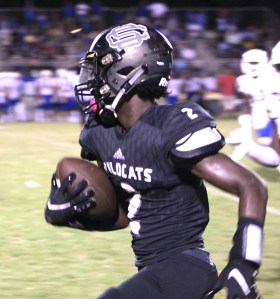 In the third quarter, however, the Wildcats were able to regain the lead when Long scored his second touchdown of the night on a quarterback sneak from one-yard out. Pinckard’s extra point attempt was good and SCHS had a 14-12 lead.

However, the Patriots had an answer. They were able to take the lead on a touchdown from Larsen Luke. The extra point was good and the Wildcats found themselves trailing 19-14 in the fourth quarter.

However, Alford’s men were able to put together a winning drive late in the game. The Wildcats were able to move the football down inside the WCHS five-yard line and capped off the drive with a four-yard rushing touchdown from Renfroe. SCHS tried to go for two, but the try was unsuccessful.

Fortunately for SCHS, the Wildcat defense was able to stop the Patriots on their last possession to secure the 20-19 win.

“I am excited about the win, but I also realize that we start region play next week, so we have to get prepared for a good, well-coached Taylor team. We are going to enjoy the win, but it’s back to work Monday,” said Alford.

With the win, the Wildcats improve to 2-0 on the season and will begin region play next Friday night, September 25, when they host Taylor County at 7:30 p.m.