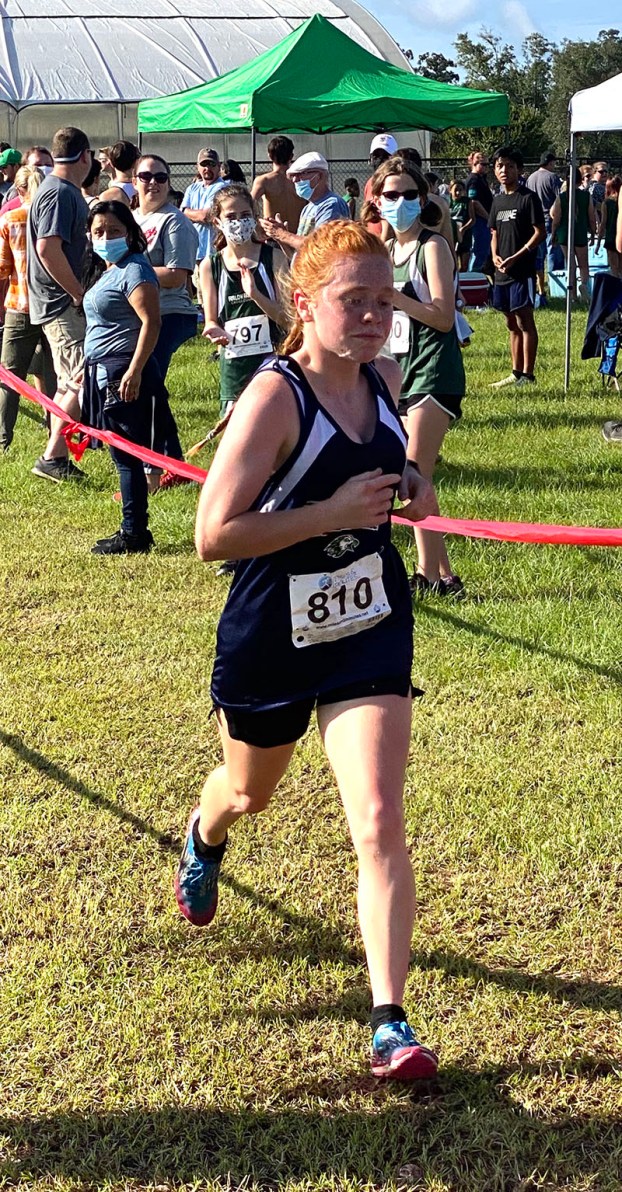 Wynn crossed the finish line in a time of 21:34.63, which was 31 seconds slower than her time at the Deerfield-Windsor (DW) Invitational the week before, but good enough two win the individual championship. She finished 26 seconds faster than race runner-up Kat Valenta of Harris County, who finished in a time of 22:00.15. 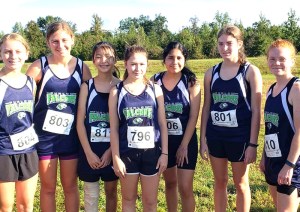 For the many runners who ran in both this meet and the DW Invitational in Leesburg the week before, the main differences in the times posted was due to the hillier MC course and the warmer weather, but Wynn had a plan of attack.

“I tried to focus on charging the hills and picking my knees up and getting up those hills with a good stride and keeping the pace,” said Wynn. She went on to say that she needs to work on her strength and speed, in particular, sprinting into the shoot.

As a team, the Lady Falcons finished the meet in second place with 46 points, 25 points behind the team champions Harris County (25 points). Calvary Christian out of Columbus finished in third with 64 points. 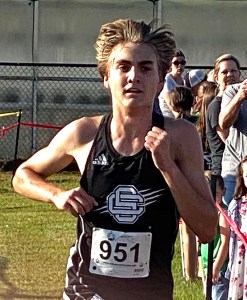 Schley County senior David Williams finished in fourth place with a time of 17:22.08 at the Marion County Invitational.
Photo by Ken Gustafson

For FC head coach Beth Kinney, it was extremely gratifying to see the hard work from both the FC girls’ and boys’ teams pay off.

“I feel that our runners competed well today,” said Kinney. “The varsity girls placed second and we had four runners place in the top 10. They continue to make improvements daily and we look forward to getting back to work and competing next weekend.”

Wynn’s teammate, freshman Maria Kilheffer, was another top 10 finisher for FC. Kilheffer finished in ninth place in a time of 25:13.31. Schley County’s (SCHS) first runner to cross the finish line, junior Grace Hardage, finished three spots behind Kilheffer. Hardage finished the race in a time of 27:09.60. “I did three minutes slower than the last meet and it was really hard,” said Hardage. “It was the hills and they were very hard on the knees.”

Americus-Sumter senior Jasmin White finished the Marion County Invitational in a time of 32:09.58, which was good enough for a PR (personal best time).
Photo by Ken Gustafson

FC junior Litzy Lepiz was the next local runner to cross the finish line. Lepiz finished the race in 13th place out of 36 competitors in a time of 27:29.04.

The first Americus-Sumter (ASHS) Lady Panther to cross was senior Teigan Pepito. Pepito finished the meet in a time of 28:50.85. Two spots behind Pepito was her teammate, senior Selliyah Owens, who finished in a time of 29:08.79.

“The challenging part about my race today was coming up the hills and trying to get down in the maximum amount of speed,” said Owens. “What I need to work on is pacing myself, my speed and my breathing.”

Right behind Owens was FC junior Jasmine Kilheffer. Kilheffer finished the race in a time of 30:03.62. Her FC teammate, junior Talana Holloway, finished with a time of 32:07.04. 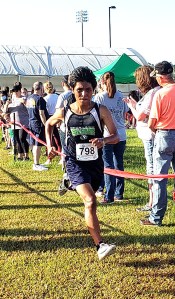 Furlow Charter sophomore Edwin Gonzalez turned in a top 10 finish by finishing in ninth place at the Marion County Invitational. Gonzalez crossed the finish line in a time of 18:32.74.
Photo by Beth Kinney

The next ASHS Lady Panther to cross the line was senior Jasmin White, who finished the meet in a time of 32:09.58, which was a new PR (personal best time) for White. “I feel like I did really good. I beat my time from last time,” said White. “It was challenging going up the hill and going around. I got a little bit tired, but I kept up my pace.”

Behind White was FC freshman Syrius Zhang, who finished the race in a time of 32:52.64.

The next SCHS runner to cross the finish line was junior Kaia MacLennan. MacLennan finished in a time of 33:12.29. “The hills were really rough and it was pretty hot too, but I did ok, I think,” said MacLennan. “I need to work on my endurance, I think, and my speed.” MacLennan’s teammates, senior Holley Rogers and freshman Kayla Moyle, finished the race with times of 36:56.37 and 37:36.85 respectively. FC junior Olivia Davis also turned in a strong performance, as she finished in a time of 39:34.40. “It was good. The hills were very hard, but we pushed through it, I think,” said Davis. She went on to say that her strategy going into the race was to keep the pace up and to always lean back when going down hills.

In the high school boys’ race, SCHS senior David Williams turned in another outstanding performance. Williams finished the course in fourth place in a time of 17:22.08. “The first half was hard,” said Williams. “There’s a lot of concrete and a lot of good hills at the end to slow the time down, but once I came to the half and got to the back half, I was cruising with the people next to me.” 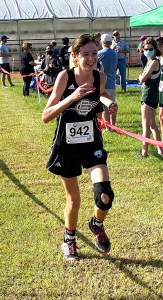 Schley County junior Grace Hardage finished in 12th place at the Marion County Invitational with a time of 27:09.60.
Photo by Ken Gustafson

As a team, the Wildcats finished in third place with 60 points, just eight points behind meet runners-up Calvary Christian. Harris County won the boys’ team championship with just 27 points. In the sport of XC (cross country), each team’s goal is to finish with the fewest points as possible in order to earn the highest placing possible.

Williams’ teammate, Aaron Pinckard, finished just two spots behind Williams in sixth place with a time of 18:14.59, just three seconds slower than his time of 18:11.45 at the DW Invitational the week before. “It was a little warmer. The course was a little bit more hilly,” said Pinckard. “I didn’t get much sleep last night because I was at the football game. I still ran a decent time though.” In addition to being a stellar XC runner, Pinckard is also a field goal kicker for the Wildcat football team. 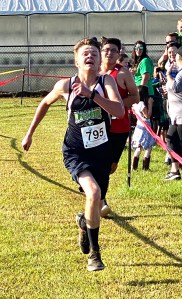 Furlow Charter senior Ashton Crowe fights his way towards the finish line. Crowe finished the Marion County Invitational in a time of 25:10.25.
Photo by Ken Gustafson

The first FC Falcon to cross the finish line in the boys’ race was sophomore Edwin Gonzalez. Gonzalez was able to post a top 10 finish, as he crossed the line in ninth place in a time of 18:32.74. “The first mile was a pretty good start, but at the end, I started having problems because it’s a hilly course, but at the end, I brought it home,” said Gonzalez.

The next SCHS Wildcat to cross the finish line was junior Dustin Howard, who finished in a time of 19:52.13. 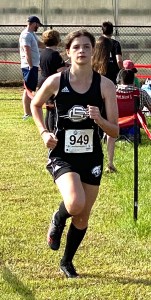 The next local runner to cross was ASHS junior Grantley Sinn. Sinn finished the MC meet in a time of 23:23.63. Two spots behind Sinn was FC sophomore Apollo Huss, who finished in a time of 23:48.44.

Right behind Huss was SCHS senior Caleb Smith. Smith finished the MC meet in a time of 23:51.80. After Smith, the next local runner to cross was FC senior Ashton Crowe. Crowe was able to push his way across the finish line in a time of 25:10.25.

“I ran pretty good today, but I fell and dropped three seconds off,” said Crowe.

He went on to say that while he ran the best time he has ever run on this particular course, it was not his best ever time and it was not what he was looking for. “I wanted something close, but I wanted better,” said Crowe. “I wanted to be around 24, but I ran a 25.” 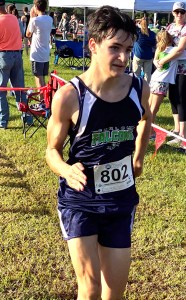 Americus-Sumter senior Selliyah Owens pushes her way towards the finish line at the Marion County Invitational. Owens finished the race in a time of 29:08.79.
Photo by Ken Gustafson

Being that the MC course was a much tougher course than the one at the DW Invitational, SCHS head coach Gabe Theiss was extremely pleased to see both of his squads fight through the adversity. “They ran pretty well. It’s a much tougher course than last week. It’s a lot warmer than it was last week, but we still ran some good times. We had another PR today (Bacon),” said Theiss. “Things are going well. They’re working really hard and it’s showing.”

ASHS head coach Shanika Dyson was also very pleased with how the Panthers and Lady Panthers competed in this meet. “Everybody did awesome,” said Dyson. “We had a couple of PRs today on both sides, for the boys and for the girls, but I think this is kind of like a down week for everybody because we came off from a meet from Columbus earlier this week.” Dyson went on to say that she expects to see more PRS from her two squads when they compete at the Westover Invitational in Albany on Saturday, October 2. Both the FC girls and boys’ teams will be there, as well as those from Southland Academy.

From Staff Reports     ELLAVILLE – It was an extremely rough evening on Friday, September 25, for the Schley... read more