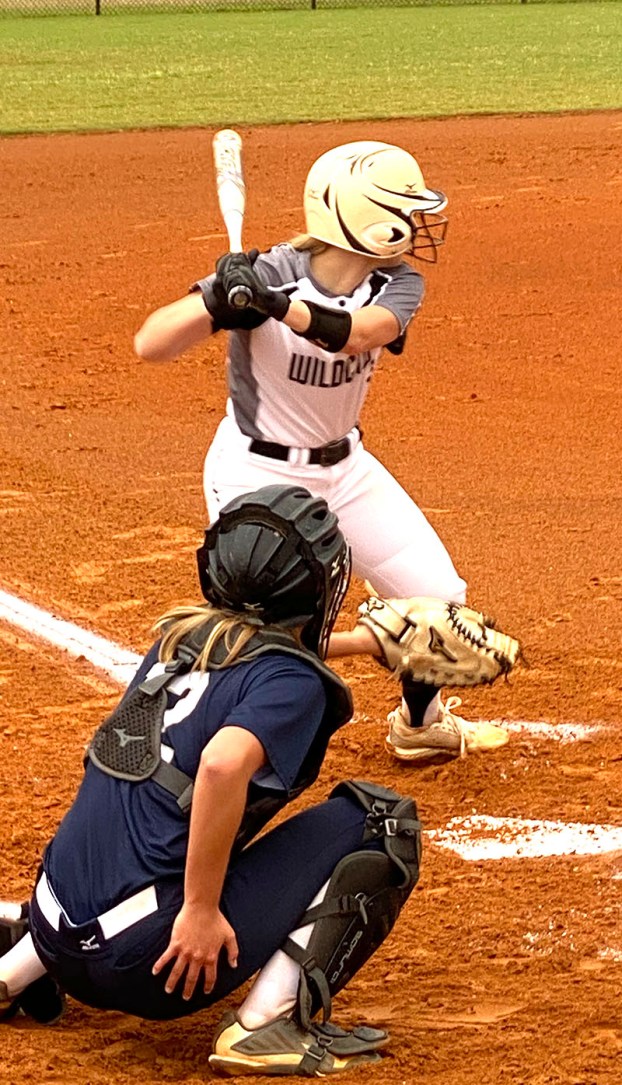 Schley County senior second baseman Jade Sellars drove in the winning run in the bottom of the seventh on a sacrifice fly to shallow right field to give the Lady Wildcats a 3-2 victory over Taylor County. Photo by Ken Gustafson

ELLAVILLE – For the entire game between the Schley County Lady Wildcats’ (SCHS) and Taylor County (TC), it was a pitchers’ dual, but in the bottom of the seventh inning, with the score tied 2-2, SCHS second baseman Jade Sellars sent a fly ball into shallow right field. The ball was caught by the TC first baseman, but Perri DeVane was able to score from third on the play to give the Lady Wildcats a 3-2 victory over the Lady Vikings.

This was an important region win for SCHS and it potentially puts them in the driver’s seat to win the GHSA Class A-Public Region 5 Championship.

While there wasn’t a lot of hitting in this game, errors played a huge role on both sides. In the bottom of the seventh, Sellars’ game-winning RBI was preceded by two errors committed by TC.

“It’s not the way we saw the game going. I hope we come out here and win a little more handedly,” said SCHS head coach Jody Sellars. “I’m proud to see my girls battle through seven innings. The errors played a factor on both sides. We gave them two runs off an error and they eventually gave us a couple back. We hadn’t played in a week so we’ve had a little lay off. I think that had something to do with us being a little sluggish offensively, but I’m glad that my girls battled for seven innings and found a way to win. The good thing about softball is that you can come back and do it again. It’s not like football, where you have to wait a week.” Sellars went on to say that the win over the Lady Vikings puts them in the driver’s seat to win the region championship. 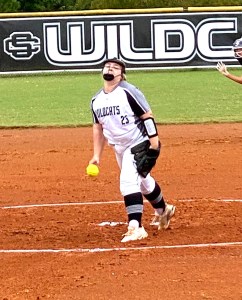 “We had a great effort from our pitcher Childs. She’s a senior,” said Sellars. “She threw a complete game and did a great job giving us a chance to win the game.”

The Lady Wildcats were only able to muster four hits in this game. Sellars, along with Zoe Molina, Rene Rix and Maddie Walker, were the ones to come up with those hits.

The game was scoreless through four innings, but in the top of the fifth, the Lady Vikings drew first blood. With one out, Ariel Bodrey reached on an error. After Caroline Albritton grounded out into a fielder’s choice, Childs ended up walking the next batter, putting runners at first and third for TC with one out.

Gracie James then reached on an error that allowed two runs to score and gave TC a 2-0 lead.

However, the Lady Wildcats struck back in the bottom of the sixth. Sellars led off with a single and Molina belted an RBI double to left field to bring SCHS to within one run. Later on in the inning, the Lady Wildcats were able to load the bases with one out, but TC starting pitcher Caroline Albritton was able to retire Maddie Walker on a pop up to second base and Hannah Crawford on a grounder to short to end the threat.

Childs was able to retire in order the next three TC hitters in the top of the seventh, setting the stage for the comeback in the bottom half of the inning. 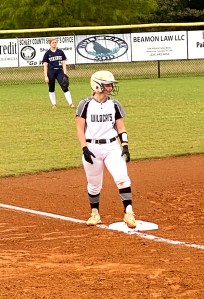 Schley County sophomore first baseman Zoe Molina is at third base looking to score. Molina went 1 for 2 with an RBI in the Lady Wildcats’ 3-2 victory over Taylor County.
Photo by Ken Gustafson

SCHS center fielder Darden Campbell led off the bottom of the seventh by reaching on an error by the TC third baseman. DeVane followed that up by laying down a bunt, but the Lady Vikings committed another error on the play, which allowed Campbell to score the tying run. With runners on second and third and nobody out, Sellars came through with a fly ball to shallow right field, scoring DeVane from third and giving SCHS the 3-2 victory.

The Lady Wildcats will take the field in Ellaville once again on Thursday, October 1, when they take on Manchester at 5:30 p.m.