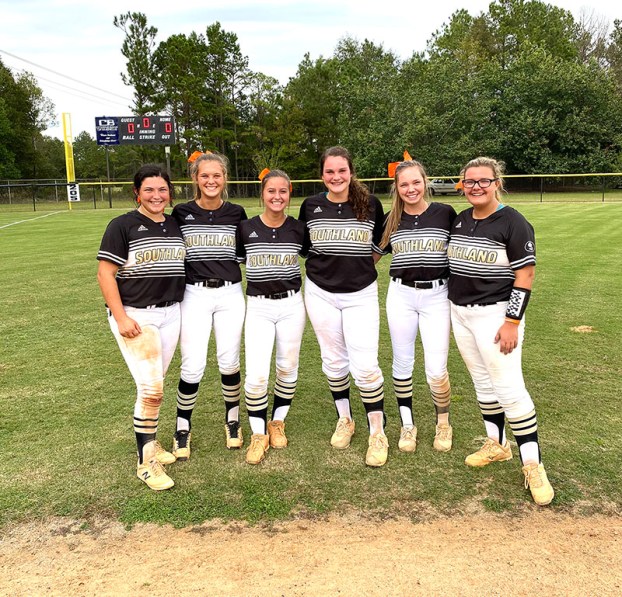 These six Southland Academy seniors (L-R), Katie Rogers, Reese Roland, Alli Dent, Holly McCain, Brookland Weaver and Sara Beth Storey, were the nucleus of the SAR girls’ softball team during the 2020 season. They were able to lead the Lady Raiders to the GISA State Playoffs, but SAR was eliminated by John Milledge Academy. ATR Archive

MILLEDGEVILLE, GA – The Southland Academy Lady Raider softball team (SAR) saw their 2020 season come to an end on Saturday, October 10, when they swept by John Milledge Academy (JMA) 9-1 and 15-3 in a best-of-three-game series in the first round of the Georgia Independent School Association (GISA) Class AAA State Playoffs.

“We had a good season with wins over some good teams,” said SAR Head Coach Rusty Tondee.  “When you get to the playoffs, you play that next level of good teams.  John Milledge was one of those teams who was extremely good in all areas of the game.  Probably the thing that stood out the most was the quality of the JMA hitters from top to bottom in their lineup.  We will miss our six seniors next year and will remember the influence they had on Raider softball for years to come.”

In Game 1, the Lady Trojans jumped out to a 1-0 lead in the bottom of the first inning when Olivia Rhodes led off with a double to left field. After Ella Hudgins flew out to right field for the first out, Rhodes advanced to third base on an error and Kortnie Moore drove in Rhodes on a sacrifice fly.

The Lady Raiders responded in the top of the third with a run to tie the game. Morgan Weaver led off the inning with a walk and Morgan Minick was able to move Weaver to second on a sacrifice bunt. Alli Dent then reached on an error, which allowed Weaver to advance to third. Sara Beth Storey struck out for the second out, but with two outs, Holly McCain reached on an error, allowing Weaver to score the tying run. Unfortunately for SAR, that would be their only run of the game.

JMA scored three runs in the bottom of the third on a two-run double by Avery Barton and an RBI single by Cadence Bandows to take a 4-1 lead. Then in the bottom of the fifth, the Lady Trojans added three more runs on four hits, including another RBI double from Barton.

The Lady Raiders were not able to answer in the top of the sixth inning and in the bottom half of the inning, JMA added two more insurance runs to salt away the 9-1 victory in Game 1.

Rhodes went 3 for 3 at the plate and scored four runs to lead JMA. Barton also had a strong game at the plate for the Lady Trojans, as she went 3 for 4 with three RBIs and two runs scored.

Storey started in the circle for SAR and pitched five innings. She game up seven runs on nine hits, walked two batters and struck out three. Dent came on in relief of Storey and gave up two runs on two hits. She walked one batter and struck out none.

With their season on the brink of extinction, the Lady Raiders fought hard to take Game 2 and force a third and deciding Game 3. However, JMA swung the bats in the top of the second inning, scoring five runs on four hits, including a three-run home run by Barton.

However, the Lady Raiders answered back with three runs of their own in the bottom of the second. Katie Rogers led off the frame with a single and Reese Roland reached on an error, putting runners on first and second with nobody out. Brookland Weaver then reached on another JMA error, loading the bases for Landry Hart. A pitch then hit hart, allowing Rogers to score the first run of the game for SAR. Both Morgan Weaver and Minick struck out, but Dent came through with a two-out, two-run single to bring the Lady Raiders to within two runs at 5-3.

Unfortunately, those three runs ended up being the last runs the Lady Raiders would score in 2020. In the top of the fourth inning, the Lady Trojans exploded for 10 runs on eight hits, including another three-run home run by Barton, to put the game away and eliminate SAR from the State Playoffs.

Storey pitched the entire game in the circle for SAR in Game 2. She gave up 15 runs on 13 hits and walked four batters.