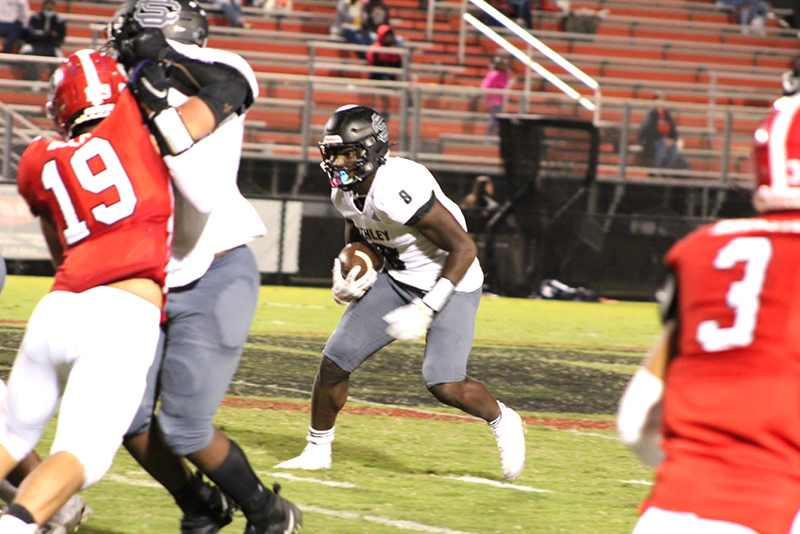 Schley County senior running back Zamon Ross seen here against Marion County a few weeks ago. Ross rushed for 152 yards on 12 carries and scored three touchdowns to lead the Wildcats to a 28-0 win over Greenville. Photo by Sheila DeVane

ELLAVILLE – Schley County senior running back Zamon Ross ran for two touchdowns and caught another one to lead the Schley County Wildcats (SCHS) to a 28-0 victory over Greenville on Friday, October 9, at Schley County High School.

The Wildcats began the scoring in the first quarter, as they were able to move the ball down inside the five-yard line. Then Ross was able to score his first touchdown of the game from one yard out. Senior Aaron Pinkard’s extra point was good and SCHS enjoyed an early 7-0 lead.

In the second quarter, Ross scored his second touchdown on a 29-yard run. Pinkard’s extra point attempt was no good, but the Wildcats had doubled their lead to 13-0. Later on in the second quarter, sophomore Malachi Banks scored a touchdown on a 27-yard run. This time, SCHS decided to go for two and Ross was able to score the two-point conversion to give the Wildcats a 21-0 lead.

The Wildcats added the finishing touch to their shutout victory when freshman quarterback Jay Kanazawa threw a 44-yard touchdown pass to Ross. Pinkard’s extra point was good and the Wildcats went on to win 28-0.

On the defensive side of the ball, senior outside linebacker Tyler Vickery was able to record a sack for a 12-yard loss and senior defensive tackle Zavian Solomon also recorded a sack, this one for an eight-yard loss.

With the win, the Wildcats improve to 3-2 on the season, while Greenville falls to 1-4.

The Wildcats will have this Friday off, but they will be preparing for another important Region 5 contest at Macon County on Friday, October 23. Kickoff for that game is scheduled for 7:30 p.m.