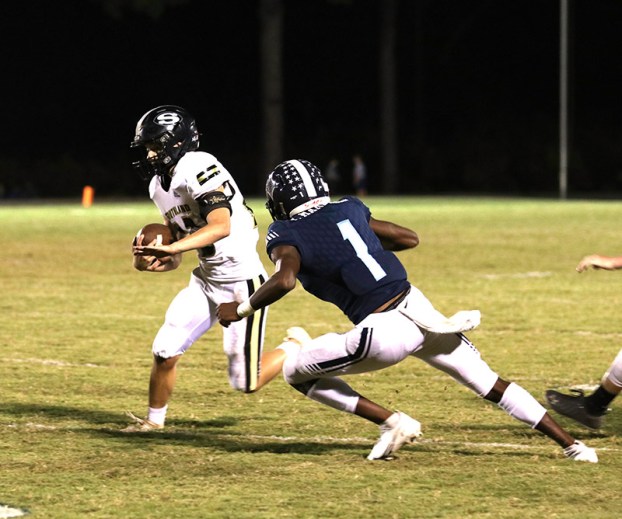 Southland Academy senior running back James Griffin rushed for 80 yards on nine carries and scored one rushing touchdown in the Raiders’ 49-18 loss at Southwest Georgia Academy. Photo by Sherri Bass

DAMASCUS, GA – The Southland Academy Raider football team (SAR) fell behind 14-0 early in the first quarter and could not recover, as the Warriors of Southwest Georgia Academy (SGA) took total control of the game from there on out and defeated the Raiders 49-18 on Friday, October 16, in Damascus, GA.

The Warriors added 13 more points in the second quarter before the Raiders were finally able to get on the scoreboard, thanks to a 37-yard field goal by Caleb Law. However, SGA continued to dominate and increased its lead to 35-3 by the end of the third quarter. 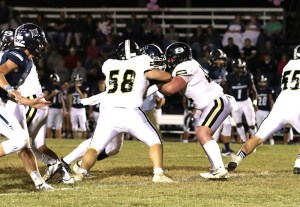 Fortunately for the Raiders, they were able to mount some scoring drives in the final quarter, as running backs David Dickens and James Griffin each scored a rushing touchdown. Tanner Humphrey was also productive for SAR, as he was able to score on a two-point conversion. Caleb Law was also able to put points on the board for the Raiders by nailing a 37-yard field goal and two extra points.

SAR quarterback Nathan Duke completed five of 11 passes for 87 yards, while Griffin led SAR in rushing with 80 yards on nine carries and a rushing touchdown.

On the defensive side of the ball, Griffin led SAR with eight solo tackles, while Duke tallied five solo tackles and one assisted tackle for a total of six tackles. 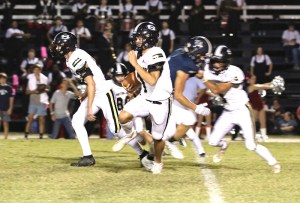 In addition to his success kicking the football, Caleb Law also created a turnover for the Raiders with an interception.

With the loss, the Raiders drop to 0-5 on the season, while the Warriors improve to 5-1.

Up next for SAR is another road game on Friday, October 23. The Raiders will travel to Eatonton, GA to take on the Gators of Gatewood. Kickoff is scheduled for 7:30 p.m.

AMERICUS – After the 53-3 drubbing they took against Peach County the week before, the Americus-Sumter High School football team... read more