Oak Grove Cemetery: A Shelter for the Dead, A Park for the Living

BY: Evan A. Kutzler

Most visitors have a specific destination when visiting Oak Grove Cemetery—the final resting place of a close family member, a friend, or perhaps a distant relative. One does not need to have several generations of family in Sumter County though to appreciate the historic patchwork of trees and monuments. Alwen Yeung, Senior Lecturer of Music at Georgia Southwestern State University, visits Oak Grove Cemetery to think. “It’s a place that I can find solitude and inner peace,” she tells me. “When I stroll around the cemetery, reading different tombstones, I can’t help but wonder what happened to the family when their loved ones passed away and what kind of life the deceased had.” She is not alone. The monuments, alongside the sounds of the fountain, a breeze, or songbirds, make Oak Grove a place for serious contemplation.

Oak Grove is one of three nineteenth-century cemeteries in Americus and, according to Alan Anderson’s count, one of more than 125 burial grounds in Sumter County. What makes the best-preserved cemetery in the county historic? At one level, it is the individual and collective stories of women, men, and children buried there. At another level are artists who built massive, ornate monuments with their inscriptions and symbolism. It is also significant because the cemetery—as a whole—represents a cultural movement that reimagined burying grounds as park-like spaces that welcomed the living, too. 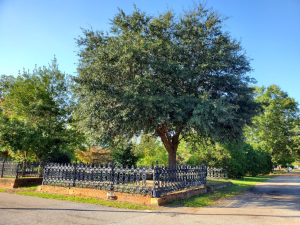 Americus came of age as Americans and Europeans began honoring their dead in new ways. For centuries, it had been common to bury the dead in churchyards, family plots, and unadorned city cemeteries. Urbanization, public health concerns, and aesthetic trends precipitated what historians call the rural cemetery movement. Despite its name, “rural” cemeteries were near (and later within) cities. It was the picturesque, pastoral atmosphere of the cemetery that gave the movement its name. There was the Cemetery of Père Lachaise (Paris) in 1804, Mount Auburn Cemetery (Cambridge, Massachusetts) in 1831, Rose Hill Cemetery (Macon) in 1840, and Bonaventure Cemetery (Savannah) in 1846—among many others. Park-like cemeteries were quiet refuges from the commotion of a city. Most rural cemeteries were privately owned. Oak Grove became one of the few city-run rural cemeteries.

As some residents believed, a rural cemetery helped elevate Americus from a courthouse town to a respectable city. It was no coincidence that the first railroad, the first newspaper, and the first public calls for a new cemetery came almost at once. One of the most outspoken local advocates was South Carolinian Charles W. Hancock, editor of the Sumter Republican. Hancock, too, arrived in town about that year and he moved into a two-story Gothic Revival house owned by C. J. Malone on College (then called “Hill”) Street. According to local tradition, Malone offered the house to Charles and Amanda (Graham) Hancock as an incentive to come to Americus. A decade later, Malone transferred the title to Amanda who had deeper roots in the community. The house’s architecture may have appealed to the Hancocks’ tastes. The popularity of Gothic Revival architecture and rural cemeteries overlapped in the mid-nineteenth century.

Only months after establishing the Sumter Republican, Hancock bemoaned the condition of the existing cemetery on Forsyth Street. “The dilapidated condition of this sacred spot,” he opined, “is indeed truly humiliating, and ought to awaken our citizens to a sense of their duty.” For Hancock, a modern cemetery was a place for both the dead and the living, locals and visitors. “A visit to a graveyard should do the heart as much good as the best sermon ever delivered,” Hancock asserted. “We love to visit this sacred spot. We love to see it look as if those resting within it were not forgotten by those whom they loved in life.” Hancock envisioned a place where people might both mourn and picnic.

Hancock’s calls for a modern cemetery grew louder in the summer of 1854 as the railroad neared and a building boom expanded the city. He wrote, “Our graveyard (for it does not deserve the name of a cemetery) at its present state is really a burning disgrace to any civilized community.” In his word choices—”disgrace” and “civilized”—Hancock guilted local leaders into action. “We use strong language, but we think the occasion warrants it,” Hancock admitted. “Our dead are buried almost promiscuously, and there is not even a fence (except a few private enclosures) to protect their graves from the intrusions of horses, cattle, and hogs.”

In Hancock’s plan, a “civilized” cemetery had to look and feel different from the existing graveyard. He suggested buying “some five or six acres” within a mile of the courthouse. “Let this lot be enclosed,” he wrote, “and a portion of it reserved for the poor who are unable to buy and another portion for the colored population.” In Hancock’s vision, the funding for landscaping, planting trees, and upkeep would come from the sale of the best plots to the wealthiest families. The cemetery would become “an attractive resort, not only for our own citizens, but for strangers who are constantly visiting our village.” What was good for the city and its residents would also appeal to outsiders.

The editor’s campaign required three years and more fiery articles in the Sumter Republican. In February 1856, Hancock reflected on a visit to Macon. The two cities compared poorly because of their contrasting cemeteries. Macon had a “garden of graves” at Rose Hill Cemetery, but the cemetery in Americus had “neither flower, tree nor shrub.” It also lacked “a hallowed square” and even a fence to prevent “the invasion of wandering beast.” Protected and decorated graves would demonstrate to all who passed by “that we loved them while living, that in death they are not forgotten.” Hancock called for Americus to follow Macon’s lead and create a city-owned rural cemetery. In the meantime, though, he wanted a fence to hide the current cemetery from view of the street.

On January 2, 1857, the City of Americus purchased nine acres from Albert Rees for a new city cemetery. Hancock praised the decision. “There is no one thing from which a stranger is more apt to infer the character of a people, than their regard to the bodies of the departed,” he wrote. “Then let the new cemetery be one that will impress him with the sentiment that he is about to mingle with an enlightened and Christian people.” Oak Grove Cemetery grew quickly. By the late-nineteenth century, many families had even exhumed their loved ones in the old cemetery on Forsyth Street and reinterred them in Oak Grove. 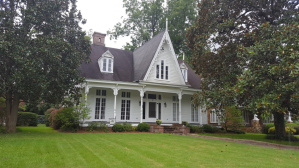 The problems of upkeep did not go away with the creation of a new cemetery. In November 1864, Hancock turned his critical eye to the condition of Oak Grove. “The cemetery is a place of resort,” he wrote, “especially on Sabbath afternoons and it should be kept clean and neat.” The cemetery had debris, a broken gate, and a fence that was falling apart. “Let all who can, send a hand,” by which he meant an enslaved man, woman, or child, “and those who cannot send any, attend themselves and let there be a general cleaning up, remove the rubbish from the yard, fill up the graves, and fix the lots.” Hancock discovered that maintaining a rural cemetery was as difficult as creating one.

An exploration of Oak Grove Cemetery reveals the Graham family plot and the grave of Amanda (Graham) Hancock. In 1895, she died in a train wreck near Macon. Charles Hancock, who died five years later, lays elsewhere—diagonally across from the sexton’s office in the Wallace family plot. There is no clear explanation why he is buried in this location. Simri Rose, the horticulturalist who helped design Rose Hill Cemetery in Macon, was rewarded, in part, with the choice of his own plot. Perhaps Hancock asked to be buried near the center of Oak Grove. Stranger is that this plot, centered with an oak tree and surrounded by a cast-iron fence, has only one marked grave. Hancock is buried in one of the eight unmarked graves.

Yet Hancock is not forgotten. He has a street—and a house—named after him. When Alwen Yeung visits Oak Grove Cemetery today, she uses the landscape as rural cemetery promoters envisioned and, implicitly, affirms Hancock’s work. “The cemetery is a serene place that is filled with love and memories,” she says. “It reminds us that life is short and we need to live life to the fullest.” Respectful visitation is a form of “living” history. It connects one to individual histories, to artists, and to a national movement in cemetery design that had its local expression in Charles Hancock and Oak Grove Cemetery.

Renominated for 1980, Pres. Carter Says, “We’ve Been Tested Under Fire”