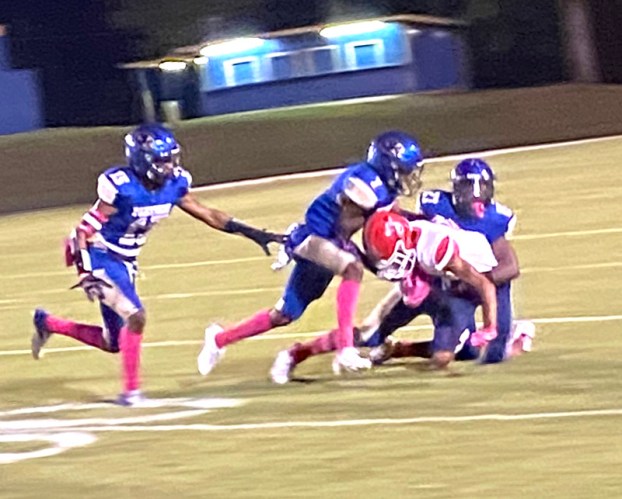 AMERICUS – After losing to Upson-Lee in a wild offensive shootout the week before, the Americus-Sumter Panthers (ASHS) were hoping that the confidence they had gained in their ability to score on offense would aid them in their home game against Jackson (JHS) and would lead to their first win of the season. Unlike the week before, Friday’s game against the Red Devils, for the most part, was a low-scoring defensive affair. While the Panther defense was solid for the entire game, the ASHS offense struggled for much of the night. As a result, the Panthers fell 21-14 to the Red Devils on Friday, October 23 at Alton Shell Stadium.

In addition to the Panthers’ struggles on offense, they committed four turnovers in this game. While ASHS quarterback Cameron Evans threw two touchdown passes, he also threw three interceptions. ASHS also muffed a punt that was recovered by the Red Devils. 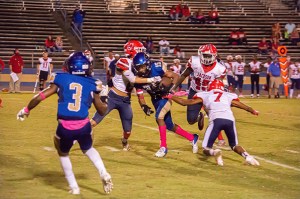 Neither team could get anything going offensively in the first quarter, but the ASHS defense was able to make plays to keep the Panthers in the game. However, the ASHS defense was not able to keep JHS off the scoreboard. The Red Devils were able to move the ball down inside the ASHS 10-yard line. Then on second and goal from the six, JHS running back Vick Henderson scored a rushing touchdown from six yards out. The extra point by Peyton Zimmerman was good and the Panthers trailed 7-0 with 7:58 to go in the first half. 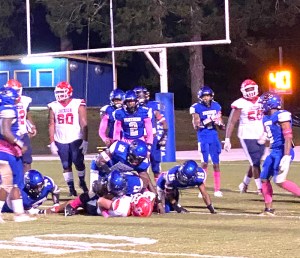 ASHS defensive lineman Michael Holt (#52) and linebacker Karounga Keita (#27) tackle a JHS running back shy of the goal line. The ASHS defense played well the entire night and held the Red Devils scoreless for most of the first half.
Photo by Ken Gustafson

The Red Devils made another drive into ASHS territory later in the second quarter, but on fourth down and five from the ASHS 35, the Panthers came up with a fourth-down stop and got the ball back. They weren’t able to score any points during the remainder of the first half, but were still in the game, trailing 7-0 at halftime.

It was a special night at Alton Shell Stadium. Not only was it Breast Cancer Awareness Night at ASHS, the 2020 ASHS Lady Panther Basketball Team was honored and recognized for winning the GHSA Class AAAA State Championship back in March. 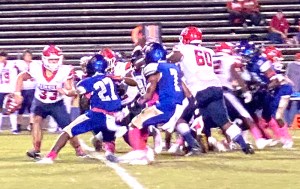 ASHS defensive back Breylon Green (#7) and linebacker Karounga Keita (#27) try to make a play on defense.
Photo by Ken Gustafson

Early in the second half, the Red Devils moved the ball down to the ASHS 10-yard line, but the Panther defense forced JHS into attempting a 30-yard field goal. The field goal attempt by Zimmerman was no good and the score remained 7-0 JHS.

The missed field goal by JHS gave the Panthers another opportunity to make something happen on offense, but a couple of bad snaps from center caused their drive to bog down, forcing them to punt. Fortunately for the Panthers, the defense continued to be strong, forcing the Red Devils into punting the football on their next possession. 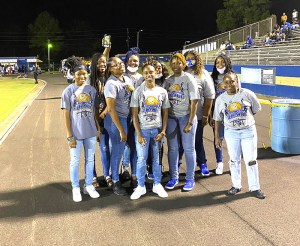 On second and 10 from the ASHS 31, Evans found Michael Johnson for a big gain and first-down yardage. In addition to that, a personal foul was called against JHS and the ball was moved to the JHS 44-yard line. However, the Red Devil defense came up with two big defensive plays, forcing the Panthers to punt again. 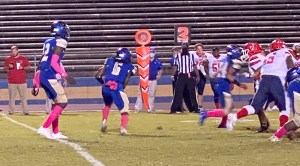 ASHS running back Christian Waymon (#6) tries to gain yards by running around the left side.
Photo by Ken Gustafson

Once again, however, the ASHS defense stalled the JHS offense and forced the Red Devils to punt, but the Panthers had the ball deep in their own territory. On third and 10 from their own 12, Evans tried a long pass to Kylan Carter, but the pass was incomplete and the Panthers were forced to punt yet again.

On the Panthers’ ensuing punt, the Red Devils were able to double their lead. ASHS punter Jawaski Whitehead, who was punting in place of Alex Vasquez, kicked a line-drive punt right to JHS returner Dennis Foster. Foster promptly returned the punt 42 yards for a JHS touchdown. Zimmerman’s extra point was good and the Panthers found themselves down 14-0 with a little less than seven minutes to play in the game. 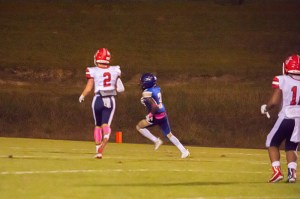 With 5:32 to go in the game, the Panthers faced fourth down and it looked as if they were going to punt the football again. However, instead of punting the ball, Whitehead ran the ball and gained first-down yardage.

That proved to be a huge play at the time, as Evans was able to find Michael Johnson on a long passing play down to the JHS 23-yard line. On the next play, Evens found Whitehead for a 20-yard reception down at the JHS 3. Then on first and goal from the 3, Evans found Johnson in the end zone for the Panthers’ first touchdown of the night. Luis Diaz made the extra point to get the Panthers to within seven points at 14-7 with 3:41 to play.

On the Red Devils’ next possession, a bad snap from center turned into a huge loss for JHS and forced them into a fourth-down situation at their own 43. Then on fourth down, the Panthers got a stop and got the ball at their own 37 with about 1:40 to go and a chance to mount a game-tying or winning drive.

The Panthers were able to move the ball across midfield, but on fourth and nine from the JHS 49, Evans’ pass was intercepted by Foster, who ran the ball 49 yards the other way for a Red Devil touchdown, making the score 21-7 in favor of JHS. 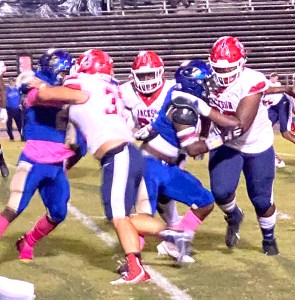 The Panthers were able to get another touchdown on their next possession, as Evans found Whitehead over the middle. Whitehead was able to break a tackle and scampered 41 yards to the end zone. Diaz’s extra point was good and the Panthers still had hopes of recovering an on-side kick with 16 seconds left.

However, Diaz’s attempted on-side kick did not go the necessary 10 yards. The ball went over to the Red Devils and they ran out the clock to get the 21-14 win over the Panthers. 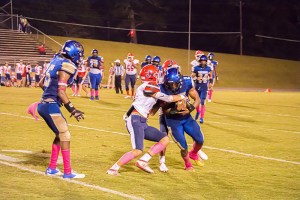 ASHS has the next week off, but they will use that week to prepare for a home game against one of the top teams in the state in the Class AAA Division: Crisp County.  This year’s version of the “Battle of the Flint” will take place on Friday, November 6 at Alton Shell Stadium. Kickoff is scheduled for 7:30 p.m.