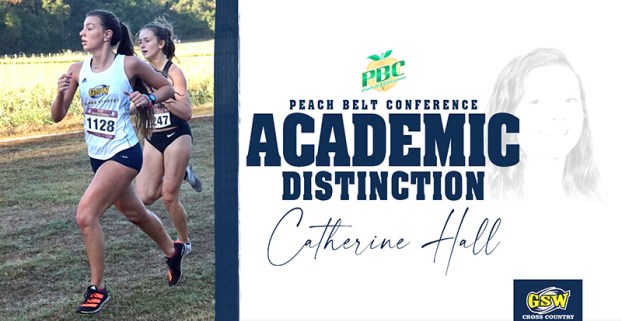 Hall earned Academic Distinction in her first year of eligibility. A native of Guyton, GA, Hall holds a grade point average of 3.893 as an engineering major. She has the sixth fastest 6K time in school history. Last fall, Hall paced the Lady Hurricanes in their final four races. She set a personal 5K record on Oct. 11, 2019, when she completed the Apalachee Regional Park course at the Florida State University Cross Country Invitational in 20:28.1. This season, Hall will make her debut on Saturday at the PBC Championships after returning from injury.

The PBC Team of Academic Distinction (formerly the All-Academic Team) is part of a season-long program recognizing the outstanding accomplishments of Peach Belt student-athletes in the classroom as well as on the field.

To be eligible for the Team of Academic Distinction this season, a student-athlete must 1) participate in at least one race or be a significant contributor; 2) achieve a 3.30 cumulative grade point average (on a 4.0 scale) and 3) have completed at least one full academic year at his or her current institution. The PBC Sports Information Directors oversee the program.

From Staff Reports     ELLAVILLE – For another local high school student-athlete, the dream of playing a sport in... read more