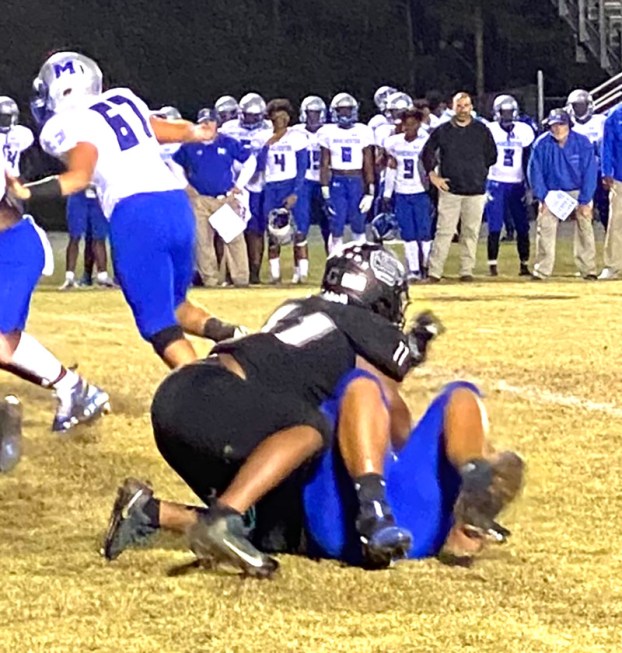 Schley County senior defensive tackle Josh Brown makes a big defensive block on a Manchester player. Brown had one sack in the game for an eight-yard loss. Photo by Ken Gustafson

Wildcats’ state playoff hopes are dashed with loss to Manchester

ELLAVILLE – After last week’s loss to Chattahoochee County in Cusseta, the Schley County Wildcats (SCHS) came into Friday night’s crucial Region 5A-Public contest against Manchester (MHS) hoping to flush that previous defeat out of their system and keep their slim playoff hopes alive with a win over the Blue Devils on Homecoming Night at Schley County. Late in the fourth quarter, the Wildcats trailed 12-6, but it looked as if SCHS was going to score a come-from-behind victory. The Wildcat offense had the ball inside the MHS 16-yard line. However, on forth and two from the MHS 14-yardline, SCHS turned the ball over on a fumble and went on to lose to the Blue Devils 12-6 on Friday, November 13 at Schley County High School.

With the loss, the Wildcats are mathematically eliminated from playoff contention and being that their final regular season game against Central Talbotton has been cancelled due to COVID-19 issues, Friday night’s game against MHS will be the last game of the season for the Wildcats.

“It was a tough game. We couldn’t capitalize on offense when we had the chances,” said SCHS Head Coach Darren Alford. “The boys played hard and I am proud of them. As far as the season goes, we didn’t accomplish our goals. We started out well, but as each week progressed, we had to make a lot of changes, but we should have done better. I have no excuse for anything that happened this year. I should have been able to pull the pieces together better than I did. The most of the kids never gave up and played hard all year. I am proud of there effort.” 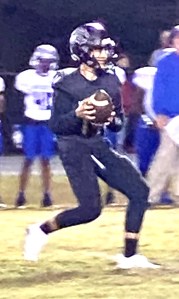 Schley County freshman quarterback Jay Kanazawa is back to throw against Manchester.
Photo by Ken Gustafson

With the loss, SCHS ends the season at 4-5 overall and 1-5 in the Region 5A-Public standings. With the win, the Blue Devils improve their overall record to 4-6 and are 3-4 in region play.

For 13 SCHS seniors, Friday’s game against MHS was their last game in a Wildcat uniform. One of these seniors is running back Luke Renfroe. Renfroe led the Wildcats with 91 rushing yards on 17 carries. Renfroe finishes the 2020 season with 516 yards on 136 carries and one rushing touchdown. Renfroe’s fellow senior teammate, running back Zamon Ross, struggled against the Blue Devils, as he ran for seven yards on 10 carries. However, Ross finishes his senior season with 556 yards on 83 carries and five rushing touchdowns.

Junior running back Sidney Blackwell also had a strong game on the ground against MHS. Blackwell rushed for 42 yards on five carries and scored one rushing touchdown. 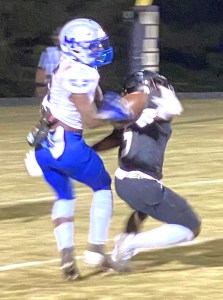 Schley County sophomore cornerback Malachi Banks breaks up a pass in the end zone against Manchester.
Photo by Ken Gustafson

Freshman quarterback Jay Kanazawa has filled in admirably in the absence of senior quarterback Jacob Long, who suffered a season-ending ankle injury in the Wildcats’ 33-14 loss to Taylor County earlier this season. In Friday’s game against the Blue Devils, Kanazawa completed four of 10 passes for 49 yards and one interception. 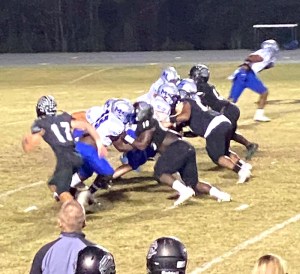 The Schley County Defensive Line tries to get a pass rush on MHS quarterback Cam Long.
Photo by Ken Gustafson

On the defensive side of the ball, sophomore outside linebacker Luke Forehand turned in a stellar performance for the Wildcats. Forehand had four solo tackles and six assisted tackles for a total of 10 tackles to lead the SCHS defense. Senior defensive tackle Josh Brown also had a strong performance for SCHS. Brown tallied two solo tackles and three assisted tackles for a total of five tackles. He also had a sack that resulted in an eight-yard loss and one quarterback hurry. 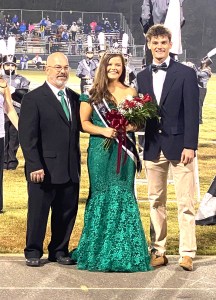 Schley County senior Ava Sellars was named the 2020 Schley County Homecoming Queen. To the left is her father, Eric Sellars and to the right is her brother, Lucas Sellars.
Photo by Ken Gustafson

The Blue Devils won the coin toss and elected to defer until the second half, meaning that the Wildcats would get the ball to start the game. On the first play from scrimmage, the ball was snapped over quarterback Sidney Blackwell’s head and it resulted in an eight-yard loss. However, the Wildcats rebounded when on the next play, Blackwell gained 23 rushing yards on a quarterback keeper. That play proved to be crucial in the drive, as the Wildcats were able to move the ball all the way down inside the MHS 10-yard line. Blackwell would eventually score from one yard out on a quarterback keeper. The extra point attempt by Aaron Pinckard was no good, but the Wildcats had an early 6-0 lead.

The Blue Devils would respond, however, as running back Wadarrius Steed ran 35 yards for a MHS touchdown. However, the extra point was no good and the score would remain tied at 6-6. MHS would later take the lead in the second quarter when quarterback Cam Long connected with Zyjuan Gray for a 52-yard touchdown completion. The first extra point attempt was good, but a penalty against the Blue Devils nullified the try and MHS was forced to kick again. However, the second attempt was missed and the Blue Devils had to settle for a 12-6 lead. 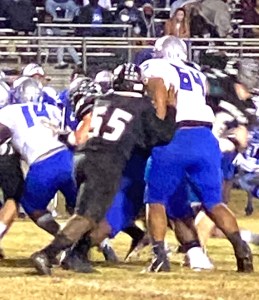 Near the end of the first half, SCHS was able to move the ball down to the MHS 25-yard line, but the Wildcats turned the ball over when quarterback Jay Kanazawa’s pass was intercepted. As a result, both teams would go into the locker room at halftime with the Wildcats trailing 12-6. 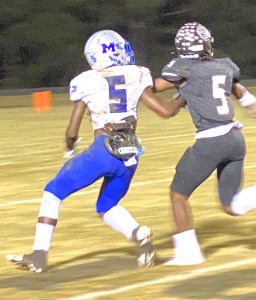 With a little over four minutes left in the third quarter, the Wildcats had the ball deep in their own territory, but turned the ball over on a fumble. However, the SCHS defense was able to return the favor when SCHS cornerback Clinton Jackson intercepted Long’s pass, halting the Blue Devils’ drive. 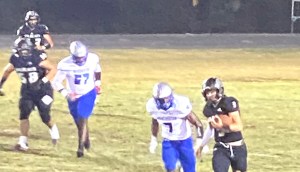 Early in the fourth quarter, the Wildcat defense was able to come up with another stop to give the ball back to the offense. On the ensuing punt, the Blue Devils were flagged twice. They were penalized five yards for illegal motion and 15 yards for a targeting foul, which moved the ball up to the SCHS 42-yard line. From there, the Wildcats used their steady running attack to move the ball into MHS territory. Then on forth down and 11 from the MHS 43, Kanazawa came up with a huge play when he found Clinton Jackson for a 22-yard reception to keep the drive alive. 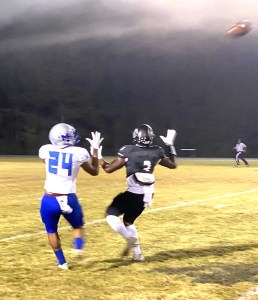 Luke Renfroe was then able to move the Wildcats closer to pay dirt when he ran the ball down inside the MHS 20-yard line. It looked as if the Wildcats were going to get the tying touchdown and extra point to take the lead late in the game. However, on fourth down and two from the MHS 14, SCHS fumbled the football and it was recovered by the Blue Devils. MHS was able to run out the clock to seal their victory and the Wildcats’ hopes of post-season play were dashed.