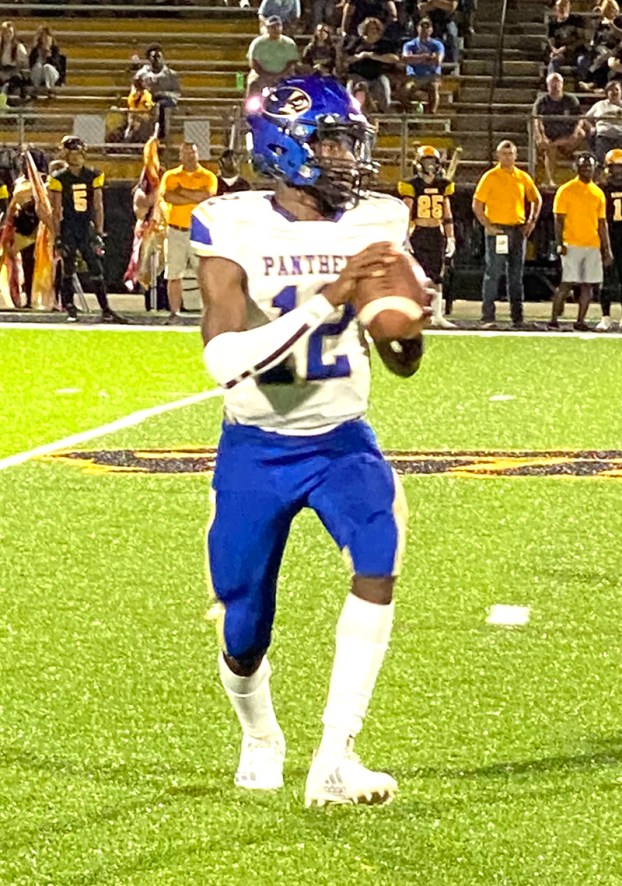 Americus-Sumter quarterback Cameron Evans threw two touchdown passes to lead the Panthers to their first victory of the 2020 season; a 22-18 win over Pike County. ATR Archive

Panthers earn first win of the season at Pike County

ZEBULON, GA – Both Americus-Sumter (ASHS) and Pike County (PCHS) have struggled mightily this season. Coming into their Friday night contest against the Pirates, the Panthers were searching for their first win of the 2020 season against a fellow Region 2-AAA opponent that only had won victory themselves to speak of.

Something had to give, and fortunately for ASHS, they were able to earn their first win of the 2020 season with a hard-fought 22-18 victory over the Pirates on Friday, November 13 at Pike County High School.

“Any time you can go on the road and pick up a win, it’s a good thing, especially when it’s your first win of the year in a season like we have experienced,” said ASHS Head Coach Ross Couch. “Our players have kept fighting and fighting all year, no matter what has happened, and that win was a testament to their hard work.”

In the first quarter, the Panther defense got things going for ASHS when Mike Johnson and Raikwan Oliver teamed up to force the Pirates into fumbling the football. Jawaski Whitehead recovered the fumble and ran the ball back 12 yards for a touchdown. The PAT by Luis Diaz was good and ASHS had an early 7-0 lead.

The Panthers were able to increase their lead to 13-0 when quarterback Cameron Evans found Johnson in the end zone for a five-yard touchdown reception. The PAT by Diaz was no good, but ASHS still had a 13-0 lead.

However, the Pirates responded in the second quarter as quarterback Gage Lee threw a long pass to Micah Stephens, moving the ball down to the ASHS 20-yard line.

A few plays later, Lee was able to find John Lovett for a 20-yard touchdown pass. The Pirates tried to go for two, but the attempt failed. Nevertheless, the Panthers’ lead had been cut to 13-6.

The Pirates would later recover a failed on-side kick by the Panthers and had the ball at the ASHS 39-yard line. A few plays later, Lovett broke through the ASHS defensive line and ran 35 yards for a PCHS touchdown. The Pirates once again tried to go for two, but once again, the attempt failed. These failed two-point conversions by PCHS would ultimately prove to be the difference in the game. At the time, however, the Panthers found themselves only leading 13-12.

With nine minutes to go in the third quarter, the Pirates were able to take the lead when running back Jaiklin King scored a 20-yard rushing touchdown. Once again, the Pirates decided to go for two, but failed in the attempt for the third time. Nevertheless, the Panthers’ 13-point lead had evaporated and ASHS found itself trailing 18-13.

However, the Panthers found a way to get back in the game. The ASHS offense was able to move the ball down into PCHS territory. The Panthers had to settle for a 35-yard field goal by Diaz, but they were within two at 18-16.

With 11 minutes to go in the game, the Panthers were able to score the go-ahead touchdown that proved to be the game winner. ASHS had the ball deep in its own territory before Evans connected with Breylon Green for an 80-yard touchdown pass. ASHS tried to go for two, but the attempt failed.

With the win, the Panthers improve to 1-7 on the season and 1-5 in the Region 2-AAA standings. With the loss, the Pirates fall to 1-7 overall and are 0-6 in the region standings.

As a result of their loss to Crisp County a week ago, the Panthers are mathematically eliminated from state playoff contention. However, they will have a chance to finish the season on a positive note. ASHS will travel up to Macon on Friday, November 20 for their last game of the season against Mary Persons (4-5, 2-4). Kickoff is scheduled for 7:30 p.m.

From Staff Reports   OAKWOOD, GA – Georgia Southwestern State University (GSW) Sophomore Catherine Hall made the most of her... read more