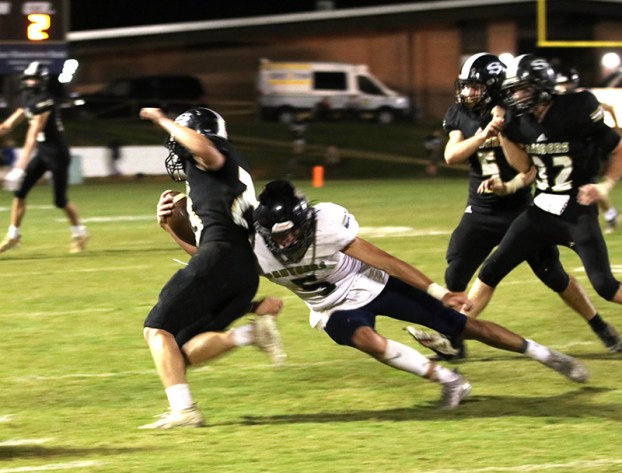 Southland running back James Griffin fights for yardage against Tiftarea Academy. Griffin rushed for 67 yards on five carries against the Panthers. Photo by Sherri Bass

AMERICUS – After their heartbreaking loss to Valwood last week, the Southland Academy Raiders (SAR) came into Friday night’s crucial Region 3-AAA contest against Tiftarea Academy (TA) with a determined resolve to come away with a victory. Thanks largely to four defensive touchdowns scored by the SAR defense; the Raiders were able to rout the Panthers 44-12 on Friday, November 13, at Harvey Simpson Stadium.

The victory gives the Raiders (2-7, 1-1) their second win of the season and, more importantly, keeps their state playoff hopes alive.

It was Senior Night at SAR, and for six seniors: Owen Exley, Will Toms, Nathan Duke, James Griffin, Colman Fort and Collins Bass, it was their last regular season home game in a Southland uniform.

“Our kids played hard, very hard.  I’m very proud of how hard they work each week to get prepared for every game,” said SAR Head Coach Rod Murray.  “Our coaches did an outstanding job of preparing them just as they do every week.  We played a lot of kids and the whole roster showed up and did their job.  We have to thank the Southland Family for always believing and supporting us.  We are looking forward to this upcoming week against another solid team.” Coach Murray went on to say that the TA team, which is coached by former Americus-Sumter Head Coach Eric Soliday, is a well-coached team and that he and his staff all have great respect for Soliday and what he has done with the TA program. Murray also took the time to give a shout out to the SAR One Act Play Team that recently won the GISA State Championship. He credited the One Act Play Team for starting the momentum at the beginning of the week that culminated with the Raiders’ win on the football field.

“That is another example of what Southland is,” said Murray. “We are a family and support each other.” 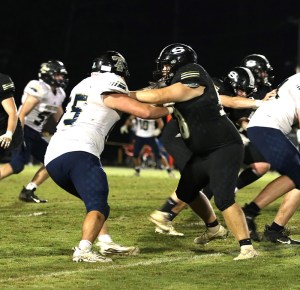 Southland senior offensive lineman Collins Bass (#58) blocks for the Raiders against Tiftarea Academy. Bass is one of six seniors that played in thedir last regular season home game for the Raiders.
Photo by Sherri Bass

However, from then on out, the Raider defense took over the game. SAR forced a turnover when defensive end Chase Ledger recovered a fumble and scored the first of four defensive touchdowns by the Raiders. The two-point conversion attempt was no good, but the Raiders had a 12-6 lead. 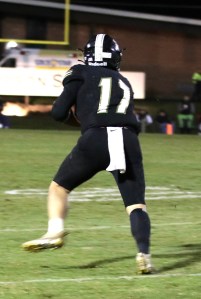 Southland defensive end Chase Ledger recovers a fumble and runs back the other way for a touchdown against Tiftarea Academy.
Photo by Sherri Bass

Later in the first half, SAR defensive back Nathan Duke came up with an interception and returned it for a touchdown. The extra point by Ledger was good and the Raiders enjoyed a 19-6 lead with 1:54 to go before halftime.

In the second half, the Raider defense continued their domination over the Panthers and forced more turnovers. SAR defensive end Henry Johnson got in on the act when he recovered a fumble and ran the ball back for another SAR touchdown. Ledger’s extra point was good and the Raiders had a commanding 26-6 lead. 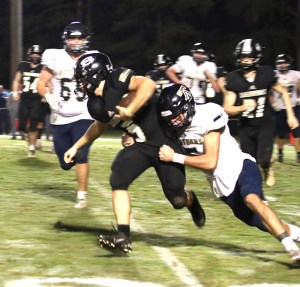 Southland running back David Dickens fights for yardage against the Panthers.
Photo by Sherri Bass

Later in the third quarter, SAR added to its lead when Collins scored his second touchdown of the night. The extra point attempt failed, but the Raiders enjoyed a 32-6 lead over TA.

In the fourth quarter, the Panthers were able to score another touchdown, but the Raiders responded once again when quarterback Nathan Duke scored on a quarterback keeper. The extra point was blocked, but SAR was now up 38-12.

Even with the big lead, the Raider defense continued to wreak havoc on TA’s offense and forced yet another turnover. SAR defensive back John Henry Crisp recovered a fumble and ran the ball back for the Raiders’ fourth defensive touchdown of the night to cap off the 44-12 rout of TA. 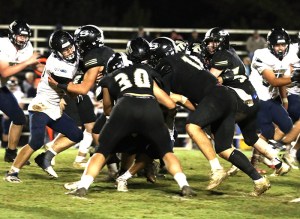 Southland defensive ends Will Godwin (#30) and Chase Ledger (#17) do their part to help the SAR defensive line get penetration against Tiftarea Academy.
Photo by Sherri Bass

In total, the Raiders forced a total of four turnovers, which all resulted in defensive touchdowns. Duke had the one interception and run back for a touchdown, and the other three turnovers were fumble recoveries that were ran back the other way for touchdowns. 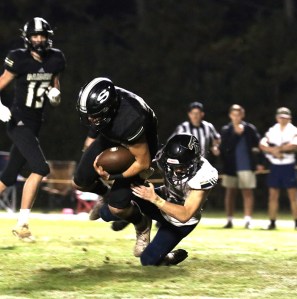 With the win, the Raiders improve to 2-7 overall on the season and 1-1 in Region 3-AAA play. TA drops to 4-4 overall and is now 0-2 in the region standings. The Raiders are currently in a tie for second place with Valwood at 1-1, but the Valiants have an edge and would win the tiebreaker due to their win over SAR on Friday, November 6.

Up next for the Raiders is their final regular season game against the Warriors of Brookwood on Friday, November 20 in Thomasville. The Warriors have an overall record of 7-3 and are in first place in the Region 3-AAA standings at 2-0. Kickoff from Thomasville is scheduled for 7:30 p.m.

Faces of COVID-19 in Sumter County