Is Providence Canyon anything but a good example of bad behavior? 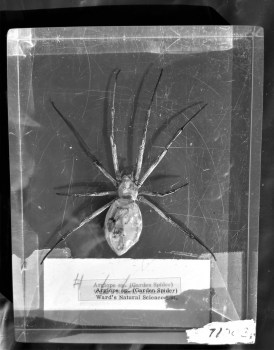 A spider embeded in a plastic block. 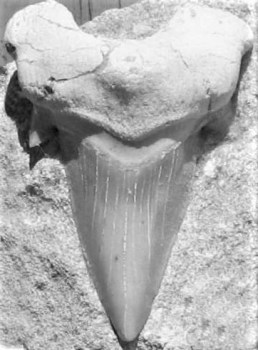 "A tonguestone from Morocco, mostly excavated from the enclosing rock to make it visible."

Long enough ago that the statute of limitations protects us from prosecution (remember to stay away from the canyon walls) I was taken to Providence Canyon by another geologist and led to a particular layer. We sampled the rock and split it along the contacts that separated the thin beds of sediment as they accumulated. Within the rock, completely enclosed by it, were fragmentary fossils of leaves. The volatile components of the living leaf (carbon dioxide and water mostly) were long rotted and gone and all that was left were black carbon films of the original leaves. The structure has been so well preserved that the veins within the leaves were still obvious.

The fossils were not worth collecting. They were only fragments, unidentifiable beyond “flowering plants”. Furthermore, the rock crumbles as it dries without stabilization procedures that I do not know how to perform. Plant fossils from rocks of the same age in other places have been collected by people who knew how to do it, and we will come back to those later in this series of articles. For now though, the fact that there are fossils embedded within the rocks at Providence Canyon is important to note. So too is the fact that they look so much like plant leaves that I immediately recognized them as such. There are no other fossiliferous horizons in any of the rocks in Providence Canyon.

In July of 1666, a little over 300 years before my only paleontological experience in Providence Canyon, a young Dane named Niels Steensen (aka Nicolai Stenonis in Latin, or Nicholas Steno in English) found his way into Florence, Italy to start a new job. He was widely known in Europe for his writings on human anatomy. Indeed, it was his expertise in anatomy that had gotten him a job at a new institution in Florence dedicated to scientific experimentation. The Accademia del Cimento was founded in 1657 by several of Galileo’s colleagues and students in his memory and funded by Ferdinando II de’ Medici and his brother Leopoldo.

In his travels and prior residences in Europe Steno had many opportunities to visit and study the “cabinets of curiosity” (small private museums) of wealthy people, and something he would certainly have seen in them would have been glossopetrae – “tonguestones”. The name most likely comes from the overall shape – generally flattened, with one broad, knobby, rough-textured end, tapering to a smoother pointed opposite end – like a tongue dissected or butchered out of an animal’s mouth. These were very common in rocks all over the continent, but the best examples are very large and come from Malta. Some people supposed them to be odd meteorites that fell out of an eclipsing Moon. Others proposed that they were petrified snakes’ tongues (which they do not resemble at all, probably telling us a lot about how “theories” were formulated at the time). But like most objects in the cabinets they were most generally thought to be just pretty crystals. After all, real crystals are symmetrically shaped, so these things might have been crystals too. Steno proved that nicely shaped crystals cannot form within solid rocks, but in his younger days everyone thought they could, and many assumed that tonguestones grew within rocks and had to be dug out to be admired. The word “fossil” is from a Latin word that means “to dig up”, and every such object was called a fossil then.

Steno had also seen places in the Alps and the Apennines in Italy where what appeared to be seashells were weathering out of the rocks. This was a source of great wonder to people of the day, but almost nobody thought enough about it to suggest that maybe they were, as a matter of fact, seashells. (Except Leonardo da Vinci, of course, but he never published anything about anything).

One day Duke Fernandino heard of a great sea monster (a great white shark) that had been caught in the Adriatic and hauled ashore near Venice. He sent word that it should be sent to Florence for his anatomist to examine. The reply was that he should look again at the original communication, paying particular attention to the word “monster”, and that, in addition to being too big for any of the local wagons to carry, it was beginning to stink.

There are different versions of what happened next. In one version he asked that the head be removed and sent, and in the other he sent Steno to Venice to see the shark for himself. The second version plays better with my intentions, so we will use that, recognizing that it might not be factually correct.

When Steno arrived in Venice he saw at first glance that the teeth, now beginning to fall loose from the rotting gums, looked exactly like glossopetrae. This was not some superficial similarity in shape, and Steno wrote extensively in his book about the details of the similarity. Today you or I would look at a tonguestone and see it immediately as a shark tooth; Steno felt he had to build an elaborate, convincing case. This led to one of the two basic geologic principles that Steno first applied and wrote extensively about: the principle of uniformitarianism. If it looks like a shark tooth embedded in a rock in Malta, then it is a shark tooth. If it looks like a seashell in the side of a mountain, it is one. If it looks like a plant leaf embedded in a rock in Providence Canyon, then it is a leaf. Modern people make the leap without thinking, but Steno had to think and to convince.

Steno recognized an enigma: how did teeth get inside of rocks? I’ve included a picture of a spider embeded in a plastic block as another example of the problem. You probably know how it got there. Two liquid epoxy-like resins were mixed and poured over it, hardening around it.  The spider was solid first, the plastic became solid later. Steno’s principle, the principle of inclusions, says that if one solid object completely encloses another, the outer one must have solidified around the included one, and is therefore the younger of the two. A tooth, shell, or leaf was solid first, then covered by loose sediment that solidified around it later. The second picture is a tonguestone from Morocco, mostly excavated from the enclosing rock to make it visible.

The principle of uniformitarianism is a basic assumption of geology, and while Steno did not create it, he was among the first to apply it and to explain his reasoning rigorously. Steno did first lay out the logic of the principle of inclusions. It is the most fundamental of the “ordering principles” of geology, telling us which of two things happened earlier and which happened later.

In the next essay I will explain Steno’s other ordering principles, all reasoned out as he considered the logical implications of a tooth within a rock. Most of them can be illustrated in Providence Canyon. There is another ordering principle that Steno did not establish. It post-dates him by more than a century, but he did speculate about it.

I can’t end this essay without drawing a moral from it. Steno was brilliant, but coming from a well-to-do family he never considered the workings of a farm, a workshop, or a fishery. He had his class; laborors and artisans had theirs. He studied Latin, geometry, chemistry, anatomy, and the like in universities. Artisans and laborers studied fishing, planting, pottery, and the like in the school of hard knocks. The two worlds never met.

So when Steno walked onto the beach where the “sea monster” lay, he knew what a tonguestone was, but he had no idea what a shark tooth looked like. The people around him were probably all too familiar with shark teeth, but they had no idea there were any such things as glossopetrae.

This story, or some modern version of it, would never happen in a liberal democracy like we have in this country and in Europe.  Our educational systems teach a broad range of ideas to a wide and representative cross section of our citizenry.  We have more familiarity, and broader familiarity, with both the natural and the social worlds than most of even the most brilliant thinkers of the Rennaisance. (Leonardo excepted, of course).  We should make sure that we preserve both the depth and the breadth of what people learn within that system.