Lessons from frogs and Freds 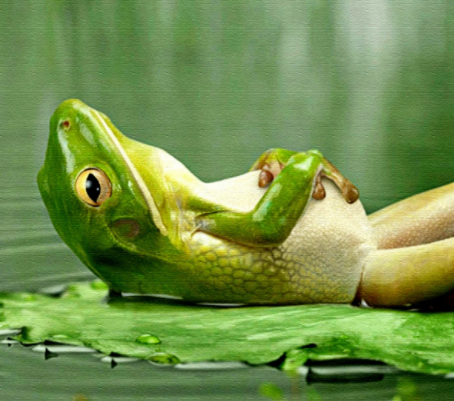 A lifetime ago I found myself as a young therapist going to work in an office on the outskirts of Macon. Our office was housed next to an apartment complex complete with a manmade pond so the residents could do whatever residents do with manmade ponds. That pond and the landscaped grounds of the complex were a nice view for us therapist types who needed a brain break and some fresh air. Except we rarely took in the view. There was something else always capturing our attention.

Outside our backdoor was a five-gallon bucket which had collected rainwater for a significant amount of time. The bucket was left over from construction work done sometime earlier. It not only collected rain, but it also collected cigarette butts. Stagnant rainwater and hot humid summers brew up a sludge soup complete with its own smell. At some point, a resident came to make this sludge bucket its home. For whatever reason, he had totally overlooked the nice pond next door and moved into the bucket.

My best friend, who I call Fred, first noticed the occupant. It was a frog who would submerge himself with his bulging eyes just above the sludge line. There was nothing about him that should have caused the emotional response he solicited, but Fred and I both had a sense of melancholia over him. There was something sad about our frog friend neither of us could put our finger on. He wasn’t hurt in anyway, he wasn’t deformed, and he certainly didn’t bother anybody just hanging out in his sludge bucket, but he still hit me and Fred both in the gut. Fred and I would go outside to take a break and some air. But there frog would be, sitting in his sludge, surrounded by cigarette butts and just steady watching us with his big eyes. He was always the center of attention. Soon we came to refer to him as Frog in a Sludge Bucket, because he was, well, a frog in a sludge bucket. We didn’t know why we always assumed he was sad, except he never moved and as far as we could tell he hadn’t used his jumping legs in quite some time. There is something mournful about a creature who gives up doing what he is made to do.

The construction workers came back. The cigarette butts grew in numbers, but Frog in Sludge Bucket was steady in his course. He never left. The filth would grow around him, and he would never see the purpose of giving up his residence. Fred and I made him a little frog ladder to get out, but he was never interested in our ladder, and seemingly never interested in making life better for himself. I am sad to say I, in my curiosity, threw several Hershey Kiss wrappers at him and poked him with a stick to see if I could get him to move, but alas, he was faithful to his sludge bucket.

After writing up clinical notes on a particularly tough case, I heard Fred walk out the back door and I followed her to get her opinion on the case. Frog in a Sludge Bucket was there as he always was. I ran my complicated family past Fred, and she began to give me her assessment. But I went deaf to Fred. My mind had clicked on the Frog. When Fred finished giving me her opinion on next steps with my family, I looked at her and said, “I know why Frog in a Sludge Bucket makes us so sad.”  I explained to Fred what we had both known about that frog all along. “Fred, he makes us sad, because we are him. How many times have we bedded down in our own sludge bucket? How many times have we stayed right in the mess because it is simply too hard to try again? How many times have we literally been too afraid to move on, so we sit, dead still, trying to make a home in a place that was never designed to be our home? How many times have folks thrown their trash on us, poked at us and yet we know nothing but to wait until it is over? How many times has someone made us a ladder we refused to accept? And perhaps saddest of all, how many times have we accepted living in a sludge bucket when all along this great big pond awaits us, most assuredly with other frog friends, if only we had the courage to make a move?” Fred looked at me, and we joined in a teary-eyed moment. We looked at each other and just like that, there was no more confusion on why Frog in a Sludge Bucket haunted us. There was only one word between us. “Yep.”

Ever been Frog in a Sludge Bucket? Me too. Plenty. What would you do if you weren’t afraid? What would you do to get home to the place you know was designed for you? How long are you willing to hang out where people throw their trash on you? How strong are your jumping legs? Do you realize there is a pond for you within viewing distance? One so close you can even hear your friends and family calling for you?

I met Frog in a Sludge Bucket about 15 years ago. Fred is still my best friend. Occasionally, I tell her I am exhausted and have nothing left in my tank. I tell her I don’t want to keep on living like this but I don’t know how to stop. I tell her, “I don’t want to think, I don’t want to try, and I am too afraid to make a move.” Her response: “Get out of the bucket.” And then she brings a ladder.  May we all be so lucky to learn lessons from frogs in a sludge bucket. May we always be loved by a Fred who brings the ladder. There is a pond waiting. There is always a pond. Get out of the bucket.