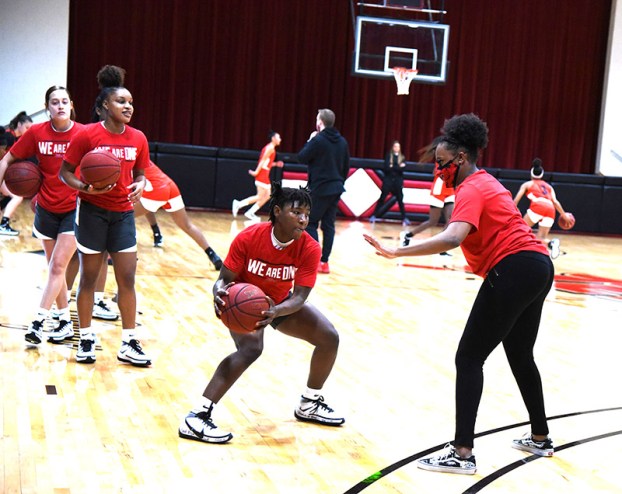 South Georgia Tech’s Veronica Charles, a 5’ 4” sophomore guard from Lagos, Nigeria, is shown above warming up and getting ready for the Lady Jets’ pre-season scrimmage with Northwest Florida. Photo by SGTC

SGTC Athletic Director and Lady Jets head basketball coach James Frey and his 2019 – 2020 team finished last season with a 30 – 2 overall record.  They were undefeated in the Georgia Collegiate Athletic Association Division I league with a perfect 17 – 0 record.  This is only the second unbeaten conference record for the Lady Jets under head coach Frey and only the third in the history of the program, which begin in 2004.

The Lady Jets had qualified for their fourth consecutive national conference and were only days away from boarding a plane to Lubbock, Texas when the COVID-19 pandemic forced the cancellation of the 2020 national tournament.  The Lady Jets have earned the right to advance to the NJCAA National Tournament six times under Coach Frey and once under former head coach Brandon Harrell in 2009 – 2010.

“It’s pretty cool to have any organization or service recognize your program,” said Frey.  “I think it’s a testament to the players and having some sort of success over time.  Obviously, we are weeks away from the season and with the pandemic, it’s going to have to take continued discipline from our players, coaches and support staff to make sure we all stay as safe and Covid-free as possible.”

Coach Frey had words of praise for the World Exposure Report.  “Donnie (Donnie Woods) does a fantastic job with his service and has been a Junior College coach so he has a very good pulse on the programs around the country.  I respect his opinion on recruits and am honored he’s got us at number 10.  Needless to say, we have a LONG way to go and a lot of work to live up to that ranking.” 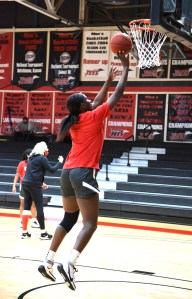 SGTC’s Femme Sikuzani is shown about putting up a basket in the warm-ups against Northwest Florida recently.
Photo by SGTC

Northwest Florida State is coached by Bart Walker and assistant coach Zack Banks.  They have two of the top five freshmen in the country and two highly recruited sophomores including Pinto, who is a 6 – 1 forward from Mozambique.  She was a World Exposure second team All- American and an NJCAA All-American in 2019 – 2020.  She averaged 13.9 points, 8.3 rebounds and 2.8 assists per game as a freshman and had 72 steals.

SGTC players highlighted to help the Lady Jets earn the 10th place ranking included: Femme Sikusani, Hope Butera, Moe Shida, and Niya McGuire.  Sikusani, Butera, and Shida have all signed letters of intent to play at the Division I level next season.  Femme Sikuzani, a 6-foot-5 center from GOMA from the Democratic Republic of the Congo will be making the trek to the University of Texas in Austin for the 2021 – 2022 season and Hope Butera, a 6-foot-3 center from Kigali, Rwanda, has announced her intent to play at Florida International University in Miami, Florida next year. Moe Shida from Hokkaido, Japan, has signed to play with New Mexico State University in Las Cruces, New Mexico.

The World Exposure Report gave this brief synopsis on South Georgia Tech.  “The Lady Jets will be leaning on inside play and leadership from Moe Shida at the guard position to carry them.  Vera Charles and Imani McNeal, sophomore guards, will give the Lady Jets experience and toughness on the perimeter.  They are five deep in the post positions and will need to develop from the perimeter for SGTC to be really good.  They had 252 points from 3’s last season from players that moved on to Division I, so they need their perimeter players to step up.”