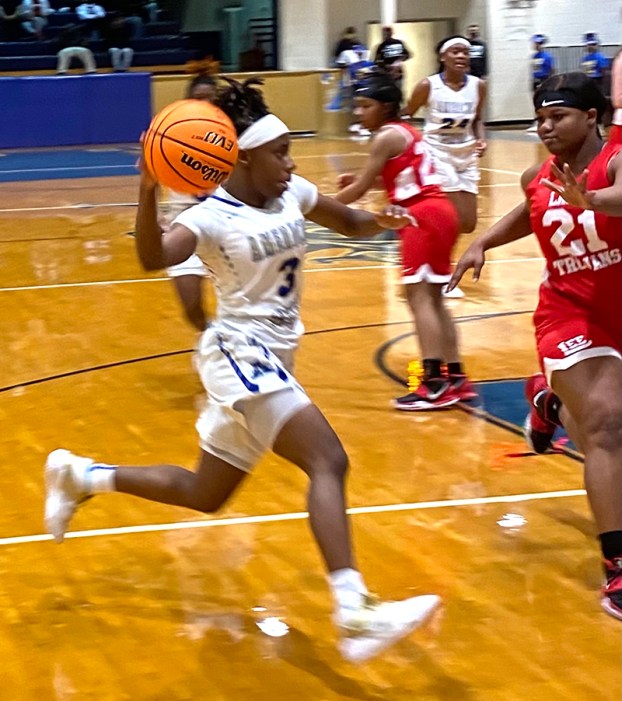 Americus-Sumter junior guard Tiffani Goodman drives to the basket against Lee County. Goodman scored 17 points in the win over the Lady Trojans. Photo by Ken Gustafson

AMERICUS – The Americus-Sumter Lady Panthers (ASHS) showed no effects from the Thanksgiving holiday in their home opener on Saturday against Lee County (LCHS). While they got off to somewhat of a slow start in the first quarter, they scored 14 unanswered points in the second quarter and continued their onslaught throughout the rest of the game on their way to a decisive 65-24 victory over the Lady Trojans on Saturday, November 28, at Americus-Sumter High School.

LCHS was missing several of their varsity players due to COVID-19 issues. Because of that, this game was almost canceled. However, the Lady Trojans were able to field a team using the remaining unaffected players and some JV players as well. 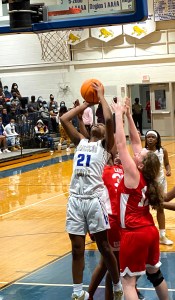 Americus-Sumter junior forward Trinity Jackson goes up for a basket against Lee County. Jackson scored 17 points in the win over the Lady Trojans.
Photo by Ken Gustafson

Due to the virus, the Georgia high School Association (GHSA) has decided to do away with the jump ball that normally begins every basketball game. This year, the visiting team will automatically get the ball to start every game.

Another rule that the GHSA has installed this year in response to COVID-19 is to have two balls on the sidelines at the scorer’s table. If a ball gets knocked into the stands, it must be cleaned off and a second ball must be used for play.

While ASHS Head Coach Sherri Harris was pleased with the overall performance of her club, she knows that there is still much work to be done in order for her squad to get to where it needs to be.

“We’re still a work in progress,” said Harris. “We’ve only got two returning players that played lots and lots of minutes last year, so it’s a learning curve for a lot of the girls. Tonight, we started a freshman (O’jayla Tookes). We have another young lady that is a first-year starter. A lot of it has to do with the fact that the more playing time they get, the better. They need to get confident so we’re not just allowing one or two players to produce the entire game. It will make us a better team, hopefully, in about five or six games.” 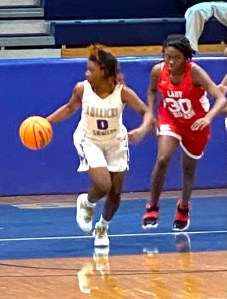 Americus-Sumter guard Destinee Sims pushes the ball up the court against Lee County. Sims scored 12 points in the win over the Lady Trojans.
Photo by Ken Gustafson

Trinity Jackson and Tiffani Goodman each scored 17 points to lead the Lady Panthers and Destinee Sims poured in 12. Both Natasha Jackson and Kaylin Holley each scored six points, Tookes chipped in four and Leah Minter scored three points to round out the ASHS scoring.

Being that there was no jump ball to start the game and the Lady Trojans got the ball to begin the game, the Lady Panthers did not get an early opportunity to use their press to force turnovers and score transition baskets like they were able to do so many times a year ago. However, those opportunities did eventually come in the latter stages of the first half and ASHS took advantage of them. From that point on, the Lady Panthers dominated the rest of the game and cruised to the 65-24 win. 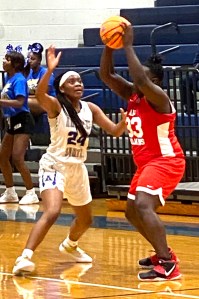 Both teams got off to a slow start in the first quarter, but with the score tied at 3-3, the Lady Panthers went on a 6-0 run, which was capped off with a jump shot by Destinee Sims. The Lady Trojans tried to slow down the tempo of the game by moving the ball slowly back and forth around the perimeter, but ASHS was able to force some turnovers and get transition baskets at the other end.

With 3:34 to go before halftime, the Lady Panthers had amassed a 15-7 lead before Trinity Jackson scored on the inside to increase the lead to 10. That ended up being the beginning of a 14-0 run by the Lady Panthers, which gave them a 29-7 lead at the half. 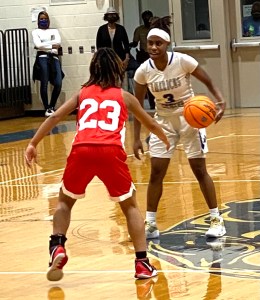 The Lady Panthers continued their onslaught in the fourth quarter and scored points in their half-court offense as well. They scored eight unanswered points early in the final quarter and would later jump out to a 52-21 lead on a basket by freshman O’jayla Tookes with a little over three minutes left.

On Tuesday, December 1, the Lady Panthers (2-0) will get introduced to their first Region 2-AAA opponent; the Lady Chargers of Central (Macon). The game will begin at 6 p.m. at the Panther Den.

AMERICUS – It has been eight months since the Americus-Sumter High School boys’ basketball team lost their only game of... read more