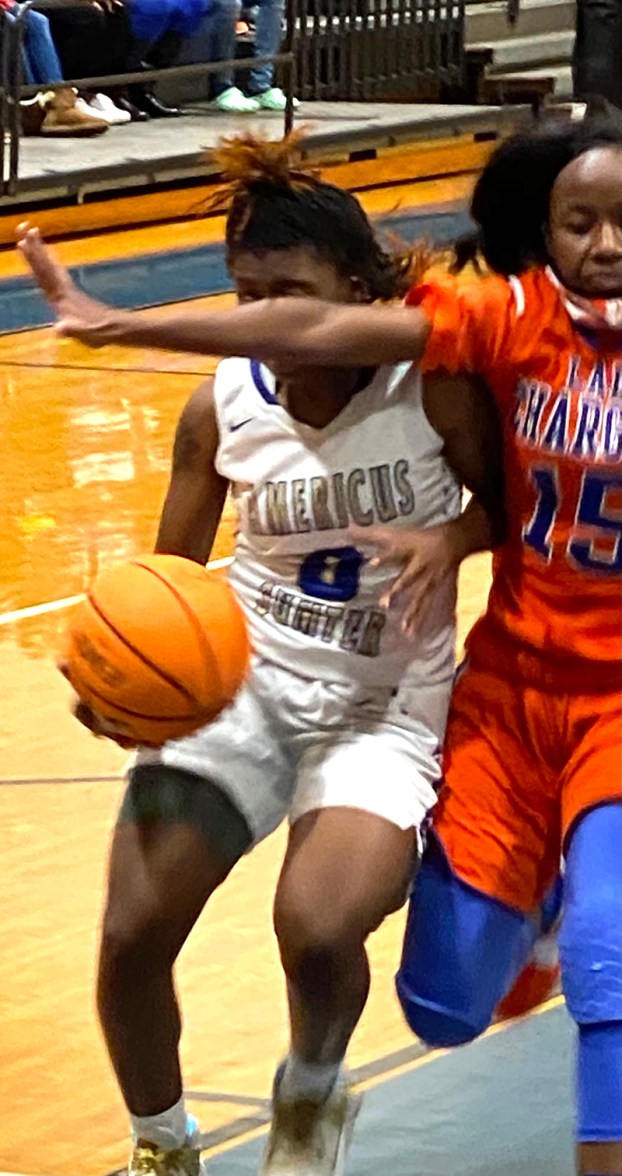 Americus-Sumter guard Destinee Sims drives to the basket against Central (Macon). Sims scored 16 points in the win over the Lady Chargers, including three three-pointers. Photo by Ken Gustafson

AMERICUS – The Americus-Sumter Lady Panther Basketball Team (ASHS) was introduced to their first Region 2-AAA opponent, the Lady Chargers of Central (Macon), on Tuesday, December 1. While they struggled at times against CM, thanks to some strong three-point shooting from Destinee Sims, along with some key baskets and defensive plays down the stretch, the Lady Panthers (3-0) were able to notch their first win in their new region as they defeated the Lady Chargers 49-38 at the Panther Den at Americus-Sumter High School.

While the Lady Panthers performed well enough to win the game, they struggled throughout the game with turnovers and taking care of the basketball. This fact was not lost on ASHS Head Coach Sherri Harris, who knows that her club made mistakes in this game that need to be cleaned up and corrected in order for them to make a repeat trip to Macon in March to compete for another state championship.

“My personal thing is that we’re making too many mistakes,” said Harris. “We’re breaking the press and it’s two on one and we’re going right to the girl on defense. There are little simple things we’ve got to work on. We got into a little foul trouble right there late. Some kids that normally don’t have to handle the ball had to step up and handle the ball, and like I told them, they have to be tougher. They can do it. They’re just not comfortable doing it and in order for us to be more successful and to get back to Macon, some of these young girls are going to have to step up and be able to handle that ball. We shot ourselves in the foot. We missed a lot of easy layups in the first half. In the second half, we came out and made, I think, three or four turnovers on our first four possessions and it was stuff that we did. They (CM) were there, but they didn’t put pressure on until late in the fourth quarter and we just made a lot of mistakes. We had a big enough lead that we were able to hang on,” continued Harris. 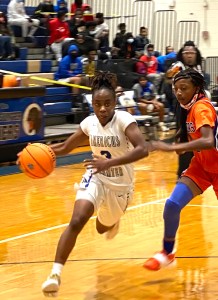 ASHS forward Trinity Jackson led all scorers with 20 points and Destinee Sims poured in 16 in the winning cause. O’jayla Tookes chipped in seven points. Tiffani Goodman had five and Natasha Jackson made one free throw to round out the Lady Panthers’ scoring.

During the first quarter, the game was a tightly contested affair with the score tied at 5-5. However, Sims gave the Lady Panthers the lead on a three-pointer. From then on, ASHS would not relinquish the lead for the remainder of the contest.

Americus-Sumter forward Trinity Jackson grabs an offensive rebound and tries to score. Jackson led the Lady Panthers with 20 points in their win over Central (Macon).
Photo by Ken Gustafson

By the end of the first quarter, the Lady Panthers only had an 8-7 lead, but momentum started to turn in the second quarter. The Lady Chargers struggled to score and this gave ASHS the opportunity to assert itself.

As is their trademark, the Lady Panthers began using their swarming, high-pressure defense to create turnovers and score points in transition. By halftime, ASHS had a 22-11 lead.

Both Sims and Trinity Jackson led the Lady Panthers in the first half with 10 points. 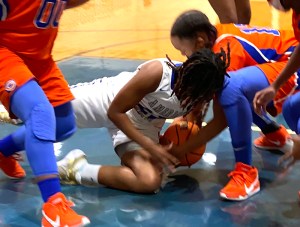 Americus-Sumter guard Natasha Jackson fights for the ball on the floor against Central (Macon). Jackson made one foul shot in the win over the Lady Chargers.
Photo by Ken Gustafson

Coming out of halftime, the Lady Panthers struggled to score, partly due to the half-court defense played by CM and also due to the fact that they struggled taking care of the basketball. The Lady Chargers went on a 5-0 run during this period, which was capped off by a basket from Trazur Cooper. During the midway portion of the third quarter, the Lady Panthers continued to struggle scoring and turned the ball over several times. It wasn’t until the 3:33 mark of the third quarter that the Lady Panthers got their first points of the second half. At that time, Sims drained a three-pointer to give ASHS a 25-18 lead.

The Lady Chargers continued to stay within striking distance as Cooper hit a baseline jumper to bring CM to within four at 25-21. However, Sins came up big again when the Lady Panthers needed it. She drilled a baseline three-pointer to extend the ASHS lead to 30-21 with a little less than three minutes left in the third quarter. Both teams struggled to score for the remainder of the quarter, but ASHS still had a double-digit 32-21 with one more quarter to play. 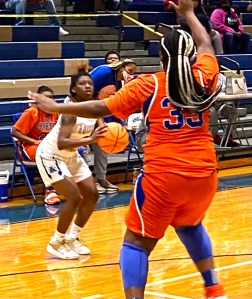 Destinee Sims is about to drill a three-pointer against the Lady Chargers. Sims scored 16 points in this game, with 12 of them coming on three three-pointers.
Photo by Ken Gustafson

Early in the fourth quarter, both teams traded baskets, but CM guard TaNiya Pryor cut the Lady Panthers’ lead to 34-25 when she drove unmolested to the basket for a layup. This prompted Harris to call a timeout to get her team to regroup and refocus.

The Lady Chargers continued to hang around and stayed within striking distance, as they were able to cut their deficit to 36-28. However, with about four minutes left, Natasha Jackson was able to find O’jayla Tookes on the inside for a layup to give the Lady Panthers a 42-32 lead. 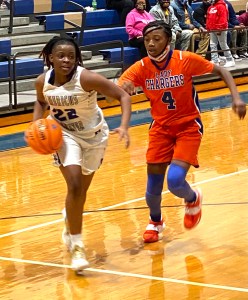 Natasha Jackson tries to power her way past her CM defender to the basket.
Photo by Ken Gustafson

TaNiya Pryor and Taliah Grier each scored 12 points to lead CM in the losing cause.

With the win, the Lady Panthers improve to 3-0 overall and are 1-0 in Region 2-AAA play. 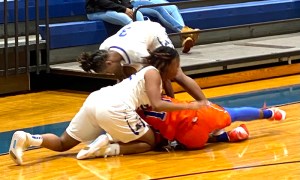 Natasha Jackson (#22) and Tiffani Goodman (#3) get on the floor and fight for the ball with a CM player.
Photo by Ken Gustafson

The Lady Panthers were scheduled to host Peach County in another Region 2-AAA game on Friday, December 4, at 6 p.m. However, that game has been postponed due to the fact that the Peach County Football Team is competing in the GHSA Class AAA State Playoffs.  That game is expected to be rescheduled sometime in January.  The Lady Panthers were also scheduled to host Westover on Saturday, December 5, but that game has been cancelled due to the fact that both the Westover girls and boys teams are currently in quarantine due to COVID-19.  In addition to that, ASHS Athletic Director Coleman Price told the Americus Times-Recorder that he was told that the Dougherty County School System (DCSS) is not comfortable with their schools playing in Sumter County because the Sumter County School System does not have an official policy in place that mandates the wearing of masks at all times at their scholastic sporting events.  Price added that ASHS does require all persons attending their games to wear masks at all times and does require those who wish to attend their home games to wear a mask even before purchasing a ticket to an ASHS event.  Even so, the DCSS has decided to cancel all previously scheduled games between its schools and ASHS.

The next game for the Lady Panthers will be in the Panther Den on Tuesday, December 8, against another Region 2-AAA opponent; the Upson-Lee Lady Knights. That game is scheduled to begin at 6 p.m.

AMERICUS – As a result of the world-wide devastating explosion of the COVID-19 virus, many people across the US and... read more