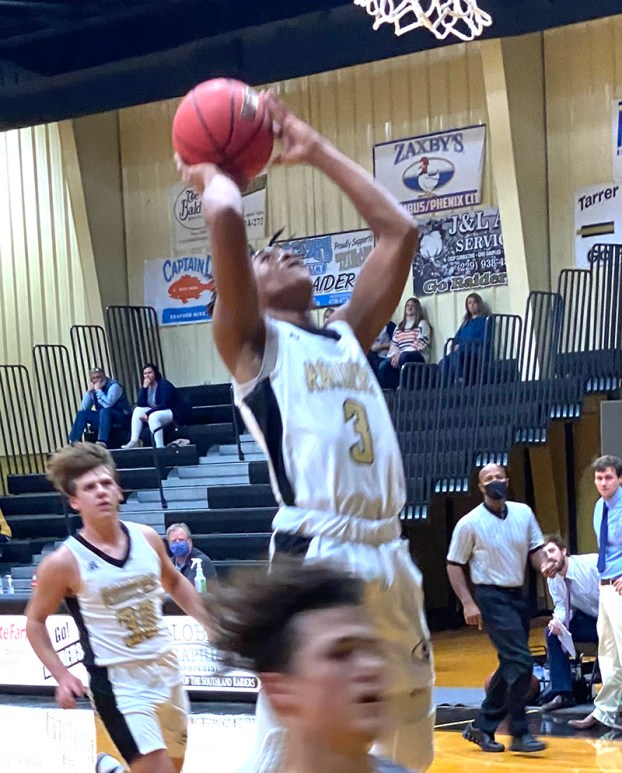 Raiders dominate from start to finish in rout of SGA

AMERICUS – From the beginning of the contest to the end of it, there was actually no contest. On the strength of tenacious defense, three-pointers and numerous transition baskets, the Southland Academy Raider Basketball Team (SAR) displayed complete and total domination of Southwest Georgia Academy (SGA). The Raiders jumped out to a 41-9 lead at the half and continued their onslaught of the Warriors in the second half on their way to a 63-18 shellacking of SGA in SAR’s home opener on Monday, December 7, at Melvin Kinslow Gymnasium.

To be fair to SGA, the Warriors have only had one team practice due to the fact that many of their players are just finishing football season. 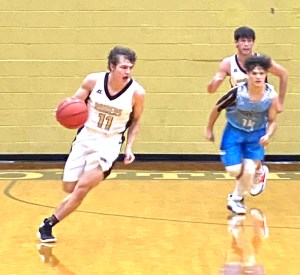 Southland Academy senior guard Max Foster pushes the ball up the court against Southwest Georgia Academy. Foster scored nine points in the contest, all on the strength of three three-pointers.
Photo by Ken Gustafson

Foster added that he thinks the world of SGA Head Coach Todd Davis and believes that Davis will have his club playing much better basketball as the season progresses. “I think he’s going to do a great job,” said Foster about Davis. “I think they’ll get better as the year goes on. They’ve only had one practice so they’re going to get better. He’s going to do a good job with them.” Coach Foster went on to say that his club’s lopsided victory over SGA is not indicative of the discrepancy between the two teams.

Carmelo Volley led the Raiders in scoring with 12 points and both Max Foster and John Henry Crisp each scored nine points for SAR. Both Chase Ledger and Buddy Brady each scored seven points, while Nathan Duke scored six. Hudson Collins scored five points and both Greer Hagerson and Carlos Tyson each chipped in four points to round out the SAR scoring. 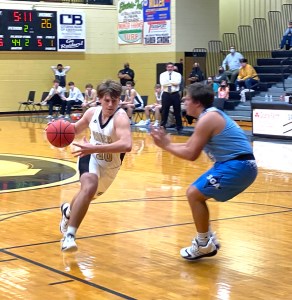 Southland Academy forward Greer Hagerson drives to the basket against SGA. Hagerson scored four points in the win over the Warriors.
Photo by Ken Gustafson

The Raiders jumped out to a 13-0 lead to start the game. That run included three three-pointers from Foster. From that point on until the end of the first half, the Raiders used their defense to force turnovers and created points off those turnovers. The Warriors were held scoreless until the 1:50 mark of the first quarter, when Jaxon Gordon scored their first basket of the game.

As the first half continued, the Raiders continued to score almost at will by using their advantages in size, speed and outside shooting ability to overwhelm SGA. As a result, SAR had amassed a 41-9 lead by halftime.

During the first half, the Raiders connected on six three-pointers, with three of them coming from Max Foster.

SAR did not let up in the second half and outscored the Warriors 22-9 on their way to the 63-18 win. 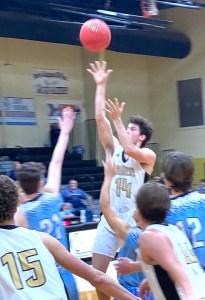 Tyler Shierling led SGA in scoring with eight points and both Gordon and Lenton Jernigan chipped in four points in the losing cause.

The Raiders (2-1) will have to put this game behind them immediately, as they will travel across the Flint River to Cordele to take on Crisp Academy on Tuesday, December 8, at 8 p.m.