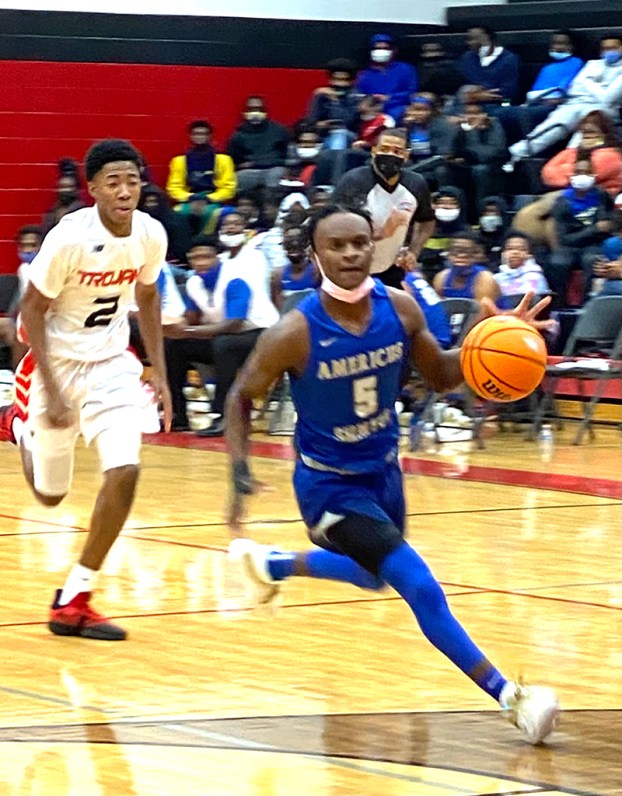 Americus-Sumter guard Michael Johnson (#5) threw a pass to Keldrick Flemming, who scored as the horn sounded to give the Panthers a 41-40 win at Lee County. Johnson scored two points in the contest on free throws. Photo by Ken Gustafson

LEESBURG, GA – While it wasn’t exactly like the dramatic finish of the 1983 NCAA Men’s Basketball Championship between North Carolina State and Houston, the ending of the boys’ high school basketball game between Americus-Sumter (ASHS) and Lee County (LCHS) did have similarities to that classic national championship game that took place 37 years ago. In that game, NC State guard Derick Whittenberg received a pass that was almost stolen from him by Houston’s Bennie Anders. But instead of it being stolen, Wittenberg was able to corral the ball and threw up a prayer that was answered when Lorenzo Charles grabbed the ball and threw down a two-handed slam at the horn to give the NC State the historic 54-52 victory. On Saturday in Leesburg, in a somewhat similar fashion, the Panthers inbounded the ball to Michael Johnson with seven seconds left, but it was almost stolen by Michael Taylor of LCHS. Johnson was able to grab the ball and threw a pass to an open Keldrick Flemming, who scored on a layup at the buzzer to give ASHS a 41-40 win.

“It was an executed play. We drew it up that way. We almost got away from it because they (LCHS) almost got a steal,” said ASHS Head Coach Johnny Genwright. “We kept playing and didn’t panic. My guys did a very good job right there at the end to execute that play and it ended up coming out in our favor with the layup.” 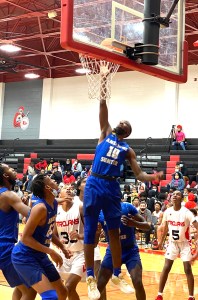 Americus-Sumter’s Kyric Daivs goes up to score a layup against Lee County. Davis led the Panthers in scoring with 14 points.
Photo by Ken Gustafson

Flemming only scored six points in the contest, but his last two points were the most important of all. Kyric Davis led ASHS in scoring with 14 points and Jordan Wiley chipped in seven in the winning cause.

The Panthers jumped out to an 8-3 lead to start the game. However, the Trojans responded with an 11-0 run of their own, which was capped off with a three-pointer by D.J. Taylor. ASHS responded in kind by outscoring LCHS 8-2 in the second quarter. The Panthers were eventually able to tie the game at 16-16 on a jump shot from Cameron Evans. 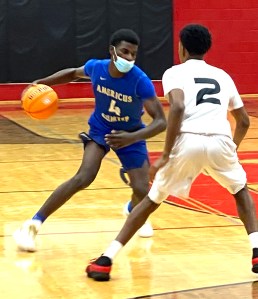 There wasn’t much scoring from either team in the waning minutes of the first half, but the Panthers would go into the locker room at halftime up 19-18.

However, during the third quarter, the Panthers struggled on offense and went scoreless until Taquan Robinson scored on a layup with a little over four minutes left to cut the ASHS deficit to 23-21. Over the next several minutes, both teams traded baskets, but the Trojans were able to take a 36-29 on a three-pointer by Joe Frazier.

During the opening seconds of the fourth quarter, the Panthers tried to turn up their defensive pressure and got a steal and a basket from Robinson to cut their deficit to 36-31. However, over the next couple of minutes, the Panthers went through another scoring drought. They struggled to score in their half-court offense and committed turnovers. In spite of their difficulties on offense, the Panthers were able to keep pace with LCHS and used their defense to limit the Trojans’ scoring opportunities. 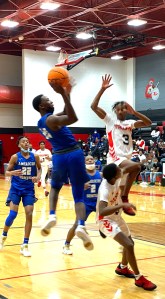 Americus-Sumter’s Kyric Davis elevates as he tries to score.
Photo by Ken Gustafson

With 3:25 left in the game, ASHS was able to get to within one at 38-37 on two foul shots from Johnson. Then with 2:55 left, the Panthers took their first lead of the second half on a layup from Davis.

However, with 1:51 left in the game, the Panthers committed a turnover, which gave the Trojans a chance to extend their lead. Fortunately for ASHS, they were able to get a stop to get the ball back and Genwright called timeout at around the 1:30 mark to get his team to regroup.

However, out of the timeout, ASHS turned the ball over again and the Trojans were able to take the lead on two foul shots from D.J. Taylor 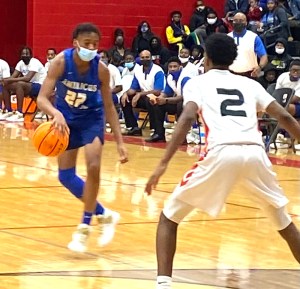 The Panthers had a chance to regain the lead when Flemming was fouled while shooting, but he missed both free throws. This gave the Trojans the opportunity to run clock and to extend their lead with a basket. However, the Panthers were able to force a turnover and had 13.2 seconds left to get a game-winning basket, as they were trailing 40-39.

ASHS dribbled the ball across the timeline before Genwright called another timeout with seven seconds left to set up the game-winning play. Out of the timeout, the Panthers inbounded the ball to Johnson, but Michael Taylor nearly got the steal for the Trojans. However, Johnson was able to handle the ball cleanly and threw a dart to Flemming, who had gotten open next to the basket. Flemming was able to make the game-winning layup at the buzzer to give the Panthers the 41-40 win.

D.J. Taylor led the Trojans in scoring with 12 points and Frazier scored 11 in the losing cause.

Americus-Sumter’s Darion Mitchell goes up to score against Lee County. Mitchell scored four points in the win over the Trojans.
Photo by Ken Gustafson

“We still have a lot of work to do. We had a lot of turnovers there at the end and a lot of missed free throws that came back to bite us, so we’ve just got to keep working,” said Genwright.

Up next for the Panthers is a trip up to Marietta, GA to take part in the Lemon Street Classic at Marietta High School Saturday through Tuesday, December 19-22. There first game of the tournament will be on Saturday at 2 p.m. against Pacelli.

A fan’s guide to the start of GSW basketball season