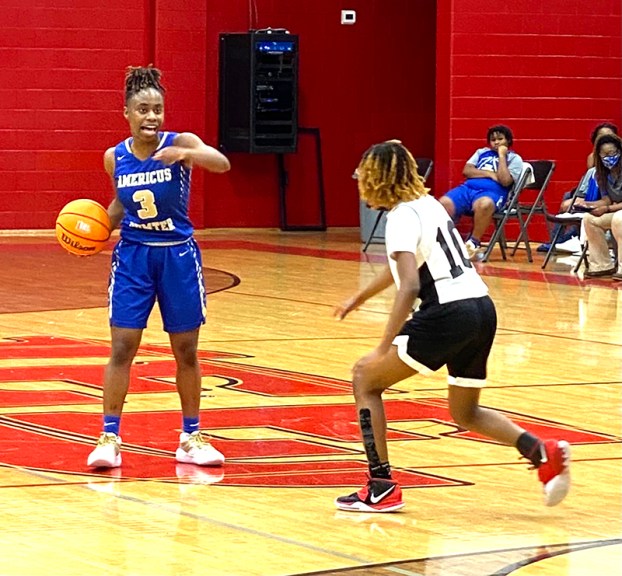 LEESBURG, GA – As a team, the Americus-Sumter Lady Panthers (ASHS) did not shoot the ball well from the foul line against Lee County. They made just 13 of 22 free throws from the charity stripe in this game. However, when ASHS needed them the most, Tiffani Goodman and Destinee Sims stepped up during the closing minutes of the game and knocked down a combined total of four foul shots to preserve a 45-41 victory over the Lady Trojans on Saturday, December 12, at Lee County High School in Leesburg, GA.

With the win, the Lady Panthers improve to 4-1 on the season, while LCHS drops to 0-3.

Coming off a difficult Region 2-AAA loss at home to Upson-Lee the previous Tuesday, the Lady Panthers were expecting to host Jackson High School on Friday, December 11, in another region contest. However, due to COVID-19, that game had to be postponed. According to ASHS Head Coach Sherri Harris, the Lady Panthers are handling the seemingly constant changes as best they can.

“They’re teenagers and, of course, it’s frustrating,” said Harris. “The couple of seniors that I have want to be out there for their senior year, so when all of the stuff happened last year with the end of the school year, like not having Prom, it was really frustrating for most of the kids, but like I told them, most of it lies in their hands. We’ve got to do what we’re supposed to do by not being out and about, taking care of ourselves, not going in certain places and making sure that everybody is protected because, you know, if one of us tests positive, then it shuts down everybody that has been around that particular individual, so unfortunately, that would hurt a team or program.” 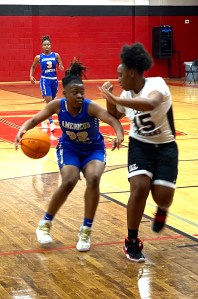 Americus-Sumter guard Natasha Jackson tries to drive the ball to the basket against Shianti Hodges of Lee County.
Photo by Ken Gustafson

Harris went on to say that both the varsity girls’ and varsity boys ‘game against Jackson are slated to be rescheduled sometime this coming weekend. The varsity boys’ game, which was originally scheduled for Friday, December 11, also had to be postponed due to COVID-19 issues involving the Jackson team.

As for the Lady Panthers’ second meeting of the year against Lee County, though the outcome was the same as the first meeting, the second meeting in Leesburg was much different due to the fact that the Lady Trojans’ were able to play their starting guards, which they weren’t able to do in the first meeting between the two clubs due to COVID-19 issues involving those LCHS players. In that first meeting, the Lady Trojans had to use JV players and fell to ASHS 65-24 in Americus on Saturday, November 28. 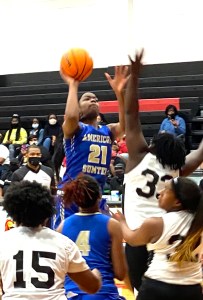 Though she was pleased with the victory, Harris knows that a lot of mistakes were made and that her squad can and must play better in certain areas.

“We’re missing a lot of easy baskets that we’ve got to make down the stretch,” said Harris. “We were horrible at the free-throw line tonight.”

Trinity Jackson led the Lady Panthers in scoring with 12 points and Nyja Carson, Aviyonna Clemons and Goodman each scored eight. Sims chipped in seven points and Kaylin Holly scored two points in the winning cause.

The first half was pretty much a back-and-forth affair between both teams, but during the early part of the half, the Lady Panthers struggled to score in their half-court offense. They did not get many opportunities to get into their full-court press to force turnovers. However, though the ASHS offense struggled at times to make shots during the first half, the Lady Panthers’ half-court defense was able to limit the Lady Trojans’ offense. 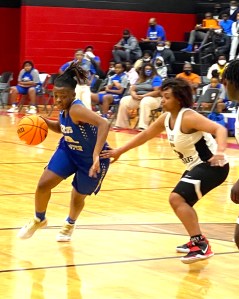 Americus-Sumter guard Natasha Jackson tries to beat her defender off the dribble.
Photo by Ken Gustafson

With under a minute to go in the half, the Lady Panthers led 17-13 before Sims drilled a three-pointer. The Lady Trojans were able to score just before the half ended, but ASHS would go into the locker room leading 20-15.

Trinity Jackson scored six of her game total of 12 points to lead ASHS in the first half.

Both teams struggled to score during the first couple of minutes of the third quarter, but LCHS was able to get a layup from Shianti Hodges to cut the ASHS lead to 20-17. The Lady Panthers didn’t score in the second half until less than five minutes left in the third quarter, when Goodman hit a short jumper to put ASHS up 22-17.

During this portion of the game, the Lady Trojans had a few opportunities to get points off layups, but couldn’t convert. This enabled the Lady Panthers to maintain their lead and they increased that lead to 24-17 when Clemons dribbled into the lane and scored. With less than two minutes left in the third quarter, the scoring began to pick up, but ASHS extended its lead to 29-21 on a three-pointer by Carson.

LCHS responded with two made free throws from Hodges and they had more opportunities to cut into the Lady Panthers’ lead. However, though the Lady Trojans were able to force ASHS into committing turnovers, they were not able to capitalize at the other end and trailed ASHS 29-23 at the end of the third quarter. 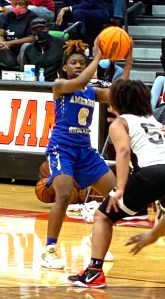 The Lady Trojans went to a full-court press to begin the fourth quarter and were able to force a turnover. However, once again, LCHS was unable to convert and the Lady Panthers were able to get a basket at the other end by Carson. Having been fouled on the shot, Carson was able to make the free throw to complete the three-point play and give ASHS a 32-23 lead.

Over the next couple of minutes of the final quarter, both teams traded baskets, but the Lady Panthers were able to break the LCHS full-court press and maintained a 39-31 led before Jakailyn Poole knocked down a bank shot, prompting Harris to call a timeout with 3:32 left in the game.

However, LCHS would not go away. Out of the timeout, the Lady Trojans were able to crawl back to within four at 39-35 when Hodges sank two more free throws. Then LCHS got to within two at 39-37 when Kennedy Snead scored and was fouled on the play. However, Snead missed the free throw, which would have brought the Lady Trojans to within one.

With 2:07 to play, the Lady Trojans got to within one at 40-39 when Poole sank two foul shots. As the game was drawing to its close, it was becoming more and more apparent that the outcome of the contest would be decided by free-throw shooting down the stretch.

With 1:33 to go, the Lady Trojans had a chance to take the lead, as they were able to get the ball inside to Poole. However, Poole’s shot would not fall and ASHS grabbed the rebound. Goodman got fouled and was able to knock down two foul shots to extend the Lady Panthers’ lead back to 42-39.

With less than a minute left, ASHS was able to force a turnover and Sims was fouled. Sims was able to make both foul shots to extend the Lady Panthers’ lead to 44-39.

Then with 16 seconds to go, the Lady Panthers had a 44-41 lead, but LCHS had the ball with one last chance to tie the game. However, ASHS was able to come up with one final defensive stop and left Leesburg with a 45-41 victory.

The Lady Trojans had two players in double figures. Poole led LCHS in scoring with 17 points and Hodges poured in 13.

The Lady Panthers will take time to enjoy Christmas with their families before hitting the hardwood once again on Monday, December 28, when they take on Valdosta in the Vereen Holiday Classic at Colquitt County High School (CCHS) The start time for that game is scheduled for 4 p.m. They will then take on the Lady Packers of CCHS on Tuesday, December 29, at 7 p.m.

LEESBURG, GA – While it wasn’t exactly like the dramatic finish of the 1983 NCAA Men’s Basketball Championship between North... read more