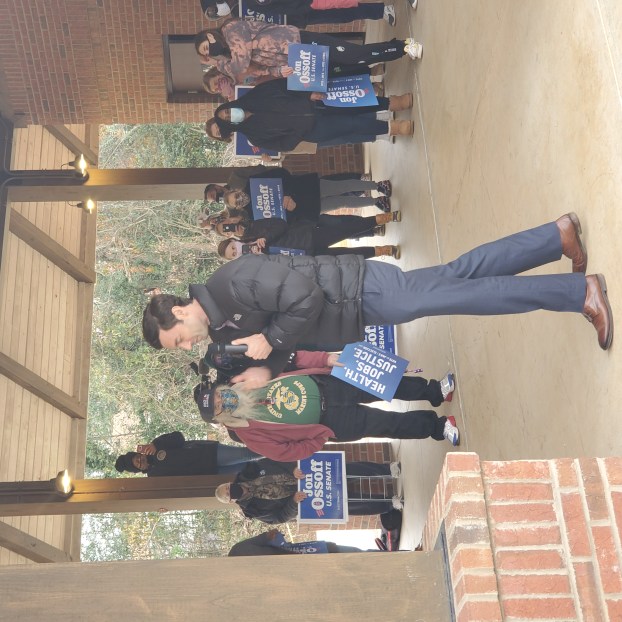 Sumter County was a stop on Jon Ossoff’s campaign path. The crowd was excited to welcome him to the Jackson Street Depot for an open-air event. Marc Arnett of Americus introduced the candidate referring to Ossoff as a Biden “reinforcement.”  Arriving after about 20 minutes of standing in the 40-degree weather the crowd was thanked for braving the cold. Ossoff then began to tell of his vision for the State of Georgia.

Having made a previous stop in Cuthbert, his first words to the crowd where to tell them Sumter County has a common bond with Randolph County in that both rural communities have lost a hospital. “Georgia has lost 9 rural hospitals in the last 10 years. Where has our senator been? If you believe like I do that healthcare is a human right and not just a privilege for those with the resources who can afford it or those who live in the right zip code, I am asking you to organize record setting turnout in the special election so we can reopen your community hospital.”

He remarked his campaign is about “health, jobs and justice.” After making comments on COVID-19, Ossoff began to speak on corruption. This would prove to be a go-to topic for the candidate. Some of his allegations are specific to Senator David Perdue and Senator Kelly Loeffler, others were general comments. Ossoff took issue with Senator Perdue’s alleged actions regarding his personal financial transactions. He referred to Perdue and Loeffler as the “Bonnie and Clyde of corruption in politics” although the Senate Ethics Committee has cleared both Senators of any ethics violations. Ossoff didn’t limit his allegations of corruption to Perdue’s financial decisions. He continued this line of attack on how it relates to healthcare and other issues. Candidate Ossoff claims healthcare is suffering because of corrupt votes regarding insurance and the lack of “taking action to make prescription drugs and insulin affordable for all people in this country.” Additionally, Ossoff believes corruption and the power of the oil and gas companies keeps Georgia from investing in clean energy. Corruption also plays a part in mass incarceration, in Ossoff’s opinion. Ossoff continued to push his accusation of Senator Perdue by telling the crowd, “David Perdue is like the cartoon version of the corrupt politician.”

As part of his healthcare platform, Ossoff was particularly interested in our hospital, which he mistakenly believes has been “lost.” “We need to elect new leadership who will fight for health, jobs and justice for all the people…..We need to elect leaders who will deliver the resources to reopen your hospital here and hospitals across the state.” To further his message on healthcare he encouraged the crowd to vote for leaders who would make “healthcare affordable and free for those who can’t afford it.”

Justice is another item on his platform. “The 14th amendment already guarantees equal protection under the law, that’s not the reality in America today.” He then referred to cases of black citizens who were killed. He states authorities overlooked these deaths. Ossoff wants a new civil rights act as well as a voting rights act and as he considers voter suppression problematic. “If we don’t get out the vote like never before they will block it all.” Ossoff sees a lot of potential for change on civil and voting right laws, so much so he reports the next 2 years can be the most productive for civil and voting rights since 1964 and 1965.

The topic of civil rights was an opportunity to mention a leader in the movement, John Lewis.  Ossoff highlights this year’s events post the death of George Floyd as a “peaceful mobilization” and he sees them as having potential to have historical impact similar to the events in Selma, Alabama in 1965. “When we win these 2 senate races and we pass a new civil rights act and a new voters’ right act, we will look back on the peaceful mobilization across this country last summer, after Ahmed Armory, Brianna Taylor and George Floyd were killed, as our generation’s march across the Edmund Pettus Bridge that paved the way for our generation’s civil rights act and voting rights act.”

The candidate listed off several items he considers to be important to the state, a few of which were local school improvements, transit, business and clean energy potential and “so much to be excited about.” The crowd responded with the excitement Ossoff mentioned. Ossoff continued speaking on our hospital, which for the third time he referred to as being nonexistent. “Your hospital which closed in 2013–if we win these senate races–we will reopen it. We will expand it. We will make sure this community has the doctors and nurses that you need. That’s the kinda power Georgia has right now and when we win the senate, we can get those things done.”

Ossoff closed by expressing gratitude for the hospitality and a promise to return to the area. He then took questions from the crowd. Election day will be January 5th and residents can vote at their regular polling place. Early voting is currently going on and will continue until December 31, 2020. Early voting is held at the Griffin Bell Conference Center at 1800 South Lee Street in Americus. Hours typically are 8am-5pm, however they may be adjusted for holidays. To confirm the hours, the Sumter County Board of Elections can be contacted at 229.928.4580. Personalized voting information can be found at MVP. SOS. GA. GOV.

The Americus Times Recorder (ATR) reported on the Sumter County Board of Commissioners’ (BOC) meeting on December 8, 2020. As... read more