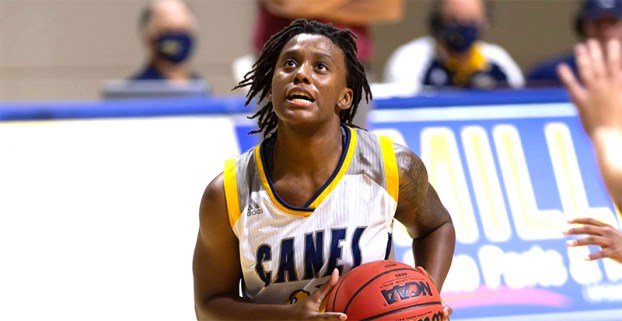 GSW freshman guard A’Aliyah Clay scored 11 points and grabbed four rebounds in her first start of the season in the Lady Hurricanes’ 57-37 win over Georgia College. Photo by Christopher Finn

AMERICUS – In what looked like it would’ve been a slow, low-scoring game after accounting for three first quarter points, the Georgia Southwestern women’s basketball team (GSW) erupted with a huge 57-37 Peach Belt Conference win, outplaying Georgia College inside the Storm Dome.

Both teams accounted for six points to end the first quarter in a low scoring game, as they combined to shoot only 2-for-35 from the floor.  Six minutes into the opening quarter, Jamesha Samuel drained a three to put GSW (4-2, 2-1 PBC) in the lead for the first points of the game. Three minutes later with 3:23 remaining the quarter, GC’s (1-1, 1-1 PBC) Cassidy Markle tied the game at 3-3 and it kept for the rest of the quarter.

The Lady Hurricanes opened up the second quarter with a 9-2 run that was cut right before a GC timeout as they led 12-8 with 4:56 remaining. Freshmen A’Aliyah Clay picked up her first start of the season, as she and Daelyn Craig connected on back-to-back three-pointers to give GSW a 20-10 lead with 2:38 left in the half. The Lady Hurricanes controlled the rest of the game with a 27-12 halftime lead.

GC opened the fourth quarter with five quick points and only trailed 39-35 with 7:31 remaining and came close to taking their first lead of the night.

Fortunately for the Lady Hurricanes, they responded with a 10-0 run by going up 48-35 before the Bobcats were forced to take a timeout. The Lady Hurricanes were able to control the final minutes of the game and secure the 57-37 victory.

The Lady Hurricanes’ weekend game against Augusta was postponed and their next game will be on the road at Clayton State on Wednesday, January 20. Tip off is scheduled for 5 p.m.