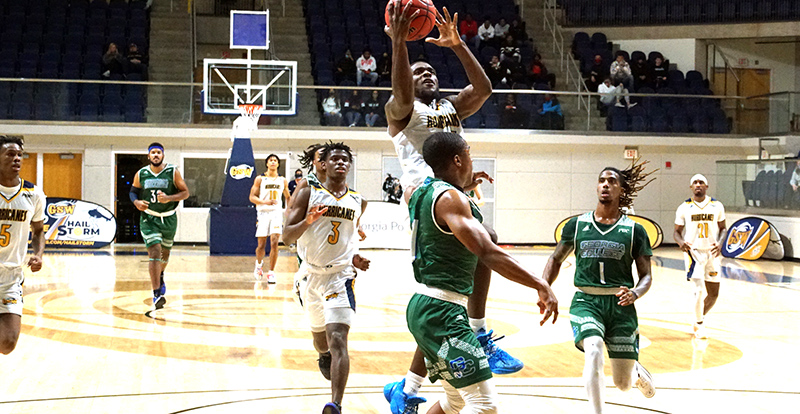 GSW junior guard Donte Tatum (shooter) posted his second double-double of the season by scoring 24 points and grabbing 10 rebounds in the Hurricanes’ 79-66 win over Georgia College. Photo by Christopher Finn

The visiting Bobcats jumped out to an early 14-7 lead, their largest of the evening, before going scoreless over a span of four minutes and surrendering the advantage to GSW. Then a three-pointer from GSW guard C.J. Hood at the 11:25 mark put the Hurricanes out in front 16-14. GSW then completed the 13-0 run with a pair of buckets from Tatum. From that point on, the Bobcats never led again.

The Hurricanes eventually pushed the margin to 39-28 on a three-pointer by Tatum with 1:40 remaining and took a 41-31 lead into the locker room at the half.

GC slowly chipped away at the GSW lead in the second period and pulled within two points with 5:16 to go. The Bobcats had a chance to tie the game with a three-pointer with 3:37 remaining, but the Hurricanes forced a missed shot and scored on their next possession. GSW connected on six consecutive free throws in the final minute to put the game away.

Tatum, who made 9 of 15 shots, finished with game-highs in points (24) and rebounds (10). Hood turned in his best collegiate performance, as the freshman scored 19 points in 27 minutes off the bench. He connected on 3 of 6 from long range.  Kahlon Whitley drained 10 of 11 shots from the charity stripe for the Hurricanes en route to his 14 points. Devon Higgs was shy of a double-double as he finished with nine points and nine rebounds.