After overtime loss in Macon, Lady Panthers rebound with win over Crisp County

AMERICUS – After their 50-44 overtime loss to Central (Macon) on Friday, January 15, the Americus-Sumter Lady Panthers (ASHS) came into Saturday night’s game against Crisp County (CCHS) poised and ready to flush the bad taste from the night before out of their mouths with a win over the Lady Cougars in basketball’s version of the “Battle of the Flint”. While they struggled at times on offense, the Lady Panthers were able to enforce their will on the game early and dominated their way to a 61-22 victory over CCHS. 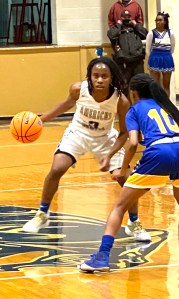 While she was happy that her squad rebounded from Friday night’s loss to get the win, ASHS Head Coach Sherri Harris knows that there is much work to be done in getting the chemistry of her club to work properly, and right now, it’s not clicking on all cylinders.

“We are still committing too many turnovers. We’ve got to figure it out,” said Harris. “We have a lot of new pieces in here. We have kids that have taken a year or two off from basketball. We’ve got to jell and we’re not jelling right now. Once we can figure that out, we will be ok.” 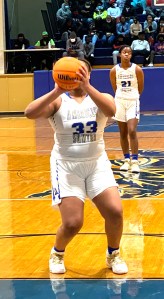 ASHS forward Eriel Aldridge broke a lengthy ASHS scoring drought in the first half by making a free throw.
Photo by Ken Gustafson

Trinity Jackson led all scorers with 23 points and Nyja Carson poured in 14 for the Lady Panthers. Aviyonna Clemons almost reached double figures in scoring, as she chipped in nine points in the ASHS winning cause.

Makaylin Holmes led the Lady Cougars in scoring with 12 points in the losing cause.

ASHS jumped out to a 19-5 lead in the first half, but struggled in the later minutes of the second quarter. They went through a long, scoreless dry spell during which they committed several turnovers and struggled in their half-court offense. It wasn’t until the closing seconds of the first half that the Lady Panthers ended that scoreless drought when Eriel Aldridge made one of two foul shots. Fortunately for ASHS, the Lady Cougars struggled to score as well and both teams went into halftime with ASHS up 22-6. 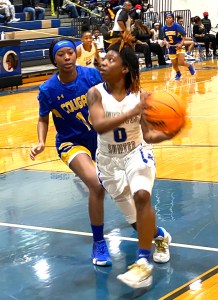 The Lady Panthers quickly jumped out of the gate in the second half and went on a 12-5 run to take a 34-11 lead. They were playing their accustomed style of basketball, which is pressing the opponent full-court, creating turnovers and scoring points off those turnovers. By the end of the third quarter, the Lady Panthers had a 41-16 lead and went on to dominate the final quarter on their way to the 39-point victory.

With the win, ASHS improves to 7-2 overall and is now 4-2 in the Region 2-AAA standings. The Lady Panthers will head up to Fort Valley, GA on Tuesday, January 19, to take on their next region opponent, the Lady Trojans of Peach County. Tip off is scheduled for 6 p.m.

AMERICUS – After their 64-45 victory over Central (Macon) the night before, the Americus-Sumter Boys Varsity Basketball Team (ASHS) was... read more