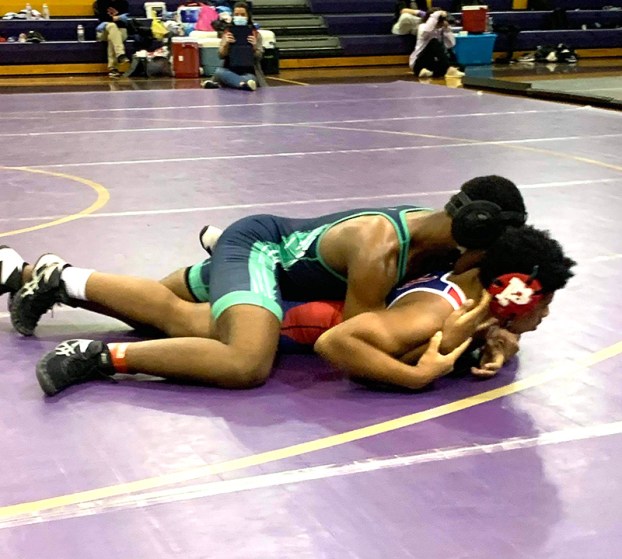 ROBERTA, GA – The Furlow Charter Varsity Wrestling Team turned in a strong showing at the Area 1-A Team Duals, which took place on Saturday, January 16, at Crawford County High School. As a team, the Falcons finished in sixth place overall. 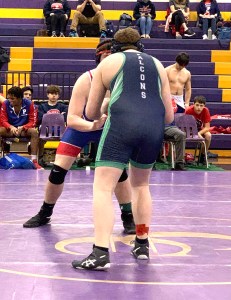 Furlow Charter freshman J.T. Prater is seen here competing in the Area 1-A Duals this past weekend. FC Head Coach Brandon Mitchell has been pleased with the progress that Prater is making as a wrestler.
Photo by Brandon Mitchell

According to FC Head Coach Brandon Mitchell, freshman J.T. Prater was able to gain more experience in this tournament and showed tremendous growth, as he continues to master various wrestling techniques. In addition to Prater’s progress, Coach Mitchell was equally pleased with the progress of other members of his squad as well.

“Our sophomore, Jordan Brown, also gained some great experience and picked up a hard-fought victory in his first varsity wrestling match,” said Mitchell.

The Falcons will have three weeks to prepare for the Area Traditional Tournament, which will take place on Friday and Saturday, February 5-6. As of right now, the location of the tournament is unknown. Stay tuned to the Americus Times-Recorder for further details.

From Staff Reports   FORT VALLEY, GA – It was not the typical high-scoring game that the Americus-Sumter Panthers are... read more