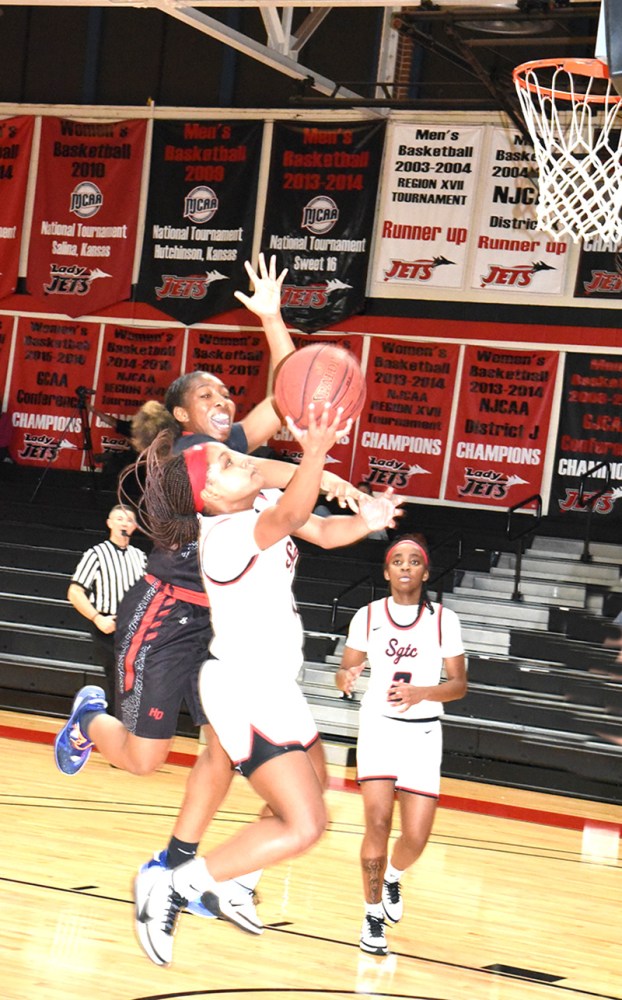 “I am very proud of our guys,” said South Georgia Technical College Interim head coach Chris Ballauer.  “We played hard and the guys gave 100 percent.  They never quit.  Obviously, we would have liked to have won, but we have a very young team and this was a great learning experience for them.  I believe that we will continue to improve as the season continues.”

SGTC Athletic Director and Lady Jets head coach James Frey was also very proud of the effort that he saw from the Jets and their new coaching staff.  “They got after a very good Tallahassee team.  They made them work for the win,” said Frey.  And when asked about the Lady Jets performance, Frey simply stated that he was happy with the victory, but added that his squad still has work to do. “Obviously we have a lot of things that we need to improve on and we will definitely have to step up our performance if we want to be competitive against Shelton State on Sunday.” 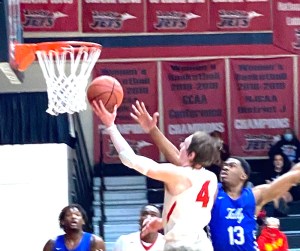 SGTC freshman point guard Will Johnson (#4) drives to the basket. Johnson led the Jets with 18 points in the loss to Tallahassee Community College (TCC).
Photo by Ken GustafsonThe NJCAA nationally ranked seventh place Lady Jets will face off against the fourth-ranked Shelton State team at 1 p.m. on Sunday, January 24, in the SGTC gymnasium.  Both teams are nationally ranked in the top 10, which should make for an entertaining game.

The Lady Jets have seven sophomores who returned from last season and two junior college transfers.  One returner, Kamiya Hollingshed, is out for the season recovering from surgery.  They are hoping for another undefeated GCAA record that will lead them to qualifying for their fifth consecutive NJCAA national tournament.  They qualified last season but the tournament was cancelled due to the COVID-19 pandemic.

In their season opener against New Horizon Prep, the Lady Jets scored first and never looked back.  They were up 20 – 14 at the end of the first quarter and stretched that lead to 41 – 21 at the half.  The Lady Jets continued to excel in the second half and held New Horizon Prep to 10 points to capture the 84 – 31 win.

Sophomore transfer Imani McNeal from Locus Grove, GA, led the Lady Jets in scoring with a total of 16 points on the night.  She was six of 12 from the floor and one of four from the three-point line.  She also had four rebounds and four assists.  She was joined by three other Lady Jets in double-digit scoring.  Sophomore Flore Ngasamputu had 12 points and seven rebounds and sophomores Femme Sikuzani and Moe Shida both contributed 10 points each.  Sikuzani had a double-double with 10 points and 10 rebounds.  Shida had three rebounds and three assists on the night to go with her 10 points. 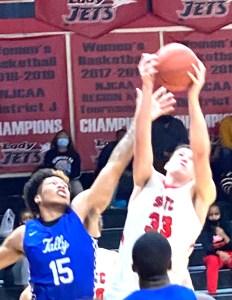 “We need to do a better job of shooting the ball from the outside and in the paint,” said Coach Frey.  The Lady Jets were five of 27 from the three-point line.  The Lady Jets were 15 of 21 from the foul line and hit 32 of 97 of their shots under the basket.  However, the Lady Jets did pick up 47 points from turnovers and 15 second chance points.  The Lady Jets are set to match-up again at 5:30 p.m. today (Thursday, January 21st) in the SGTC gym. 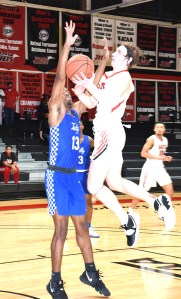 SGTC point guard Will Johnsons takes on a TCC defender.
Photo by Su Ann BirdFollowing the big win by the Lady Jets, the Jets came out to face a very strong Tallahassee Community College team.  “We knew we would have our hands full because they are big and fast, but that set the bar for the season,” said Coach Ballauer.  “We know the kind of competition that we are going to face and we can see what we need to improve on for the next game.  But I am proud of how our team played and never gave up.”

The Jets were down 50 – 28 at the end of the first half, but outscored Tallahassee in the second half 40 – 34 to finish the game with an 84 – 68 loss.  The Jets actually had the lead three times in the matchup and were tied at one point.

Freshman guard Will Johnston from Sydney, Australia, was the leading scorer for the Jets with 18 points.  He was seven of 15 from the field, one of six from the three-point line and was three of three from the foul line.  He also had five rebounds and three assists.  Two other Jets were in double-figures.  Freshman guard Marvin McGhee from Atlanta, GA, had 14 points and Jalen Reynold, sophomore forward from Darien, came away with 11 points.  He also had eight rebounds.

Sophomore Nikola Sasroga from Novi Sad, Serbia, posted nine points in his first game as a Jet.  Sophomore returner Tabais Long and Dahl Fleg both added six points, and Keundre Campbell, a freshman from Preston, and Kadeem Wilks closed out the scoring with two points each.

SGTC freshman guard Marvin McGhee (#10) scored 14 points for the Jets in their loss to TCC.
Photo by Ken Gustafson

The Jets have their work cut out for them as they travel to Florida on Tuesday and Wednesday, January 26th and 27th to face Chipola College and Northwest Florida College.  Chipola is ranked sixth in the NJCAA Region 8 Men’s Basketball Coaches poll and Northwest Florida State was fifth.  Tallahassee was ranked first in that poll.  They will not play at home again until February 6th when they play USC Salkehatchie at 3 p.m.

The Lady Jets have a home game at 5:30 on Thursday, Jan. 21st against New Horizon Prep and then at 1 p.m. on Sunday, Jan. 24th against Shelton State.  They travel to Tuscaloosa, AL on January 31st for a rematch with Shelton State and then go to Andrew College in Cuthbert for their first conference game on Feb. 2nd.  They will return home on Feb. 4th to take on Andrew College at 5:30 p.m.

From Staff Reports   ROBERTA, GA – The Furlow Charter Varsity Wrestling Team turned in a strong showing at the... read more