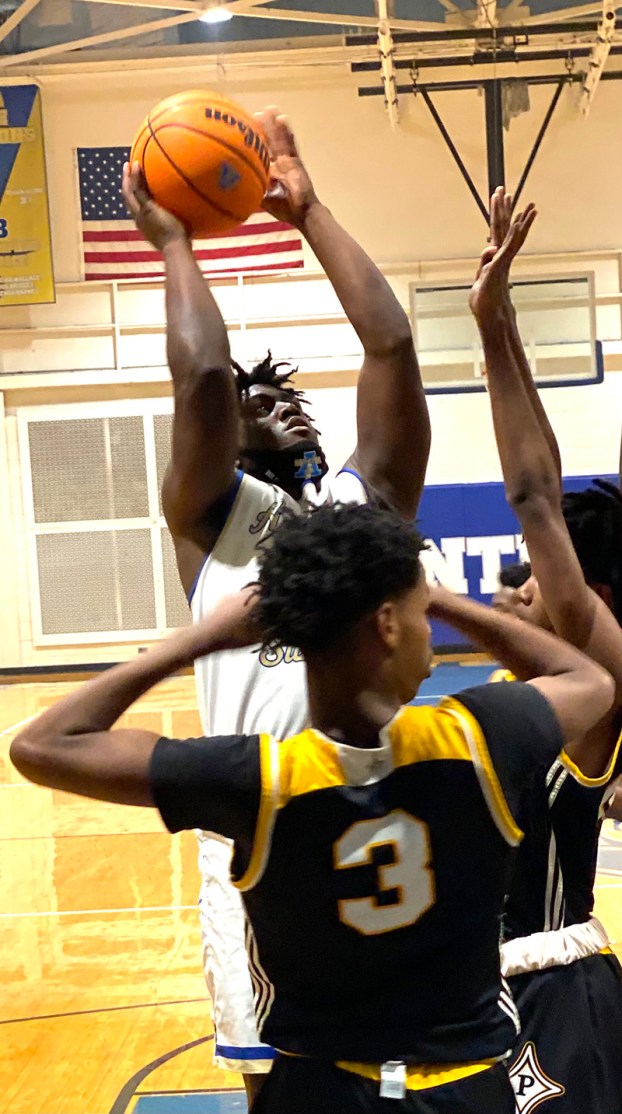 Americus-Sumter small forward Jordan Wiley fights to score on the inside. Wiley scored 15 points in the win over Peach County. Photo by Ken Gustafson

After loss at Upson-Lee, Panthers rebound with win over Peach County

AMERICUS – The Americus-Sumter Panthers (ASHS) had their six-game winning streak snapped by Upson-Lee (ULHS) in a 60-55 Region 2-AAA loss in Thomaston on Friday, January 23. Fortunately for the Panthers, they didn’t have long to dwell on the loss and used it as motivation against Peach County (PCHS) the very next day in the Panther Den. Thanks to a 10-0 run by ASHS in the first quarter and a 9-1 run in the fourth, ASHS (10-3, 8-1 Region 2-AAA) was able to get back on the winning track by securing a 72-61 Region 2-AAA victory over the PCHS Trojans. 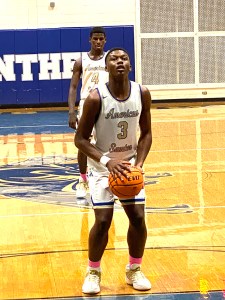 To sum it up, it was a game of spurts and runs. ASHS won this game by using its high-pressure defense to create its offense, which is what the Panthers have normally been able to do for the last few years. They also used their aggressiveness on both the offensive and defensive boards to earn second-chance points. Though PCHS was able to make a couple of runs of its own to make the game interesting, ASHS was up to the task of responding on both the offensive and defensive ends of the floor to make sure that victory was secured. 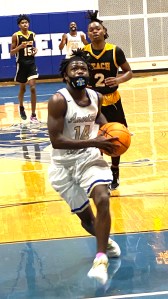 However, from that point on, it was all ASHS. The Panthers went on a 10-0 run to take a 13-3 lead. They did this by using their tenacious, high-pressure defense to cause turnovers and they scored points off those turnovers. The Panthers’ half-court defense also made it difficult for the Trojans to score on offense. As a result, PCHS never led in this game. 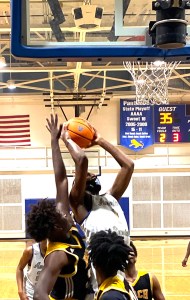 Americus-Sumter senior power forward Darion Mitchell tries to score on the inside. Mitchell scored nine points in the Panthers’ win over the Trojans.
Photo by Ken Gustafson

Throughout much of the first half, PCHS tried to press the Panthers full court, but the ASHS guards were able to move the ball quickly and broke the Trojans’ press just about every time it was tried. By the 2:44 mark of the second quarter, the Panthers enjoyed a 36-21 lead before ASHS forward John Monts scored and was fouled on the play. He made the free throw to complete the three-point play, giving the Panthers a 39-21 lead. ASHS continued to be aggressive during the closing minutes of the first half and went into halftime leading 43-25.

Americus-Sumter junior forward Kyric Davis (10) rebounds and goes up to score against Peach County. Davis scored three points in the win over the Trojans.
Photo by Ken Gustafson

However, the Trojans would not go quietly. They went on a 9-0 run to cut their deficit to 45-32 before ASHS Head Coach Johnny Genwright called a timeout with 5:41 remaining in the third quarter. Out of the timeout, PCHS got another basket, but Flemming was able to end the Panthers’ scoring drought by knocking down a jumper to give ASHS a 47-34 lead.

The momentum began to swing back in the favor of ASHS when Mitchell scored on the inside and was fouled. Mitchell made the foul shot to complete the three-point play and Jordan Wiley would later score on a goal tending call against the Trojans. This was all part of a 7-4 run by the Panthers, which gave them a 54-39 lead with a little more than one minute left in the third quarter. 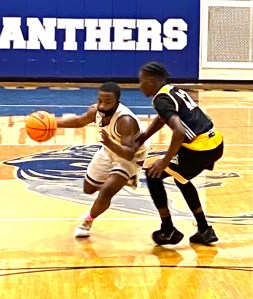 Americus-Sumter sophomore point guard D.J. Hurley tries to get past a PCHS defender. Hurley scored two points in the Panthers’ win over the Trojans.
Photo by Ken Gustafson

However, PCHS responded with another run to get back in the game and outscored the Panthers 8-2 to cut its deficit below double digits at 56-47. It was the first time since the first quarter that the Trojans had trailed by less than 10 points.

However, as quick as the Trojans cut the ASHS lead down to nine, the Panthers were just as quick to push their lead back up to 16 points. They went on a 9-1

run that was capped off by a basket and a free throw from Mitchell. Then with 4:25 left in the game, Brandon Pope increased the ASHS lead to 67-49 with two made free throws. From that point on, the Trojans were not able to mount another serious run and the Panthers would go on to win 72-61. 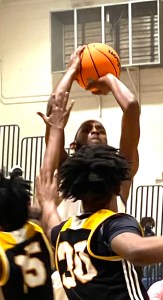 The Trojans were led in scoring by Mathis’s 27 points, which led all scorers. Ladarius Johnson was also in double figures for PCHS with 13 points in the losing cause.

In the Panthers’ loss to ULHS the night before, it was a close game throughout and ASHS had a 42-40 lead after three quarters. However, the Knights came alive in the final quarter and outscored ASHS 20-13 to earn a come-from-behind 60-55 win.

Jordan Wiley led the Panthers with 17 points and Flemming had 13 in the loss to ULHS.

With the win over PCHS, the Panthers stay in first place by themselves in the Region 2-AAA standings at 8-1, while the Trojans drop to 9-5 overall and 5-4 in Region 2-AAA play. 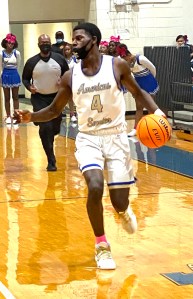 Americus-Sumter sophomore guard Cameron Evans scored the Panthers’ first points of the game on a three-pointer against Peach County. Evans scored a total of six points in the contest.
Photo by Ken Gustafson

The Panthers will try to keep their top spot in the region when they travel up to Jackson, GA on Tuesday, January 26, to take on the Red Devils of Jackson High School. Tip off is scheduled for 7:30 p.m.

AMERICUS – The Southland Academy Lady Raider Basketball Team (SAR) did what they normally do in their 52-26 GISA Region... read more