Hurricanes lose to Flagler in battle for first place 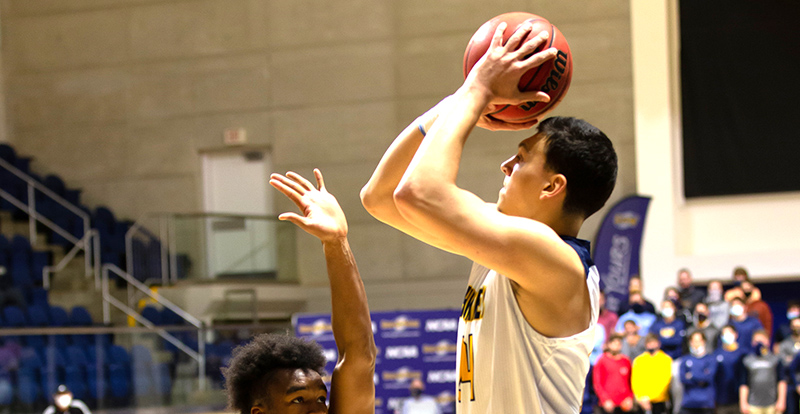 GSW redshirt-senior forward Baris Ulker scored 22 points on 6 of 12 shooting from beyond the arc in the Hurricanes’ 84-77 loss at Flagler College. Photo by Christopher Finn

AUGUSTINE, FL – The Georgia Southwestern State University men’s basketball team (GSW) had its three-game winning streak snapped with an 84-77 loss at Flagler College in a battle for first place in the Peach Belt Conference Saturday afternoon, January 23, inside the Flagler Gymnasium.

As would be expected with a pair of teams atop the PBC standings, neither side could get any separation over the opening 13 minutes. The game was tied four times before GSW grabbed its first lead with a Kahlon Whitley layup at the 7:02 mark to make the score 28-27. Flagler answered with three-pointer on its next possession and never trailed again.

The final five minutes of the first half proved to be the difference for the Saints as the hosts outscored GSW 11-2 to take a 43-33 lead into the break. The Hurricanes pulled to within six points on multiple occasions over the final 20 minutes, but could not make that final run to regain the lead.

The Saints finished slightly higher than the Hurricanes in most statistical categories. Field goal percentage was 50 percent for Flagler compared to 48.3 percent for GSW, three-pointers made favored the home team (11-9). A few more free throws were made by Flagler (13-10) and rebounds also tilted to the hosts (36-28).

Baris Ulker had a career afternoon with 22 points behind 6 of 12 shooting from beyond the arc. Ulker dished out five assists, collected two steals and blocked a shot. Devon Higgs scored 13 points and led GSW with nine rebounds. Whitley made 5 of 10 shots, scored 11 points, had a team-best eight assists and led all players with four steals.

With a balanced offensive attack, all five starters for Flagler (7-2, 5-1 PBC) scored in double figures, as well as one player off the bench. Marcus Henderson led the Saints with 18 points. Derrick Ellis, Jr., Jalen Barr and Chris Mezger added 14 apiece. Ellis, Jr. was the Saints leading rebounder with nine boards.