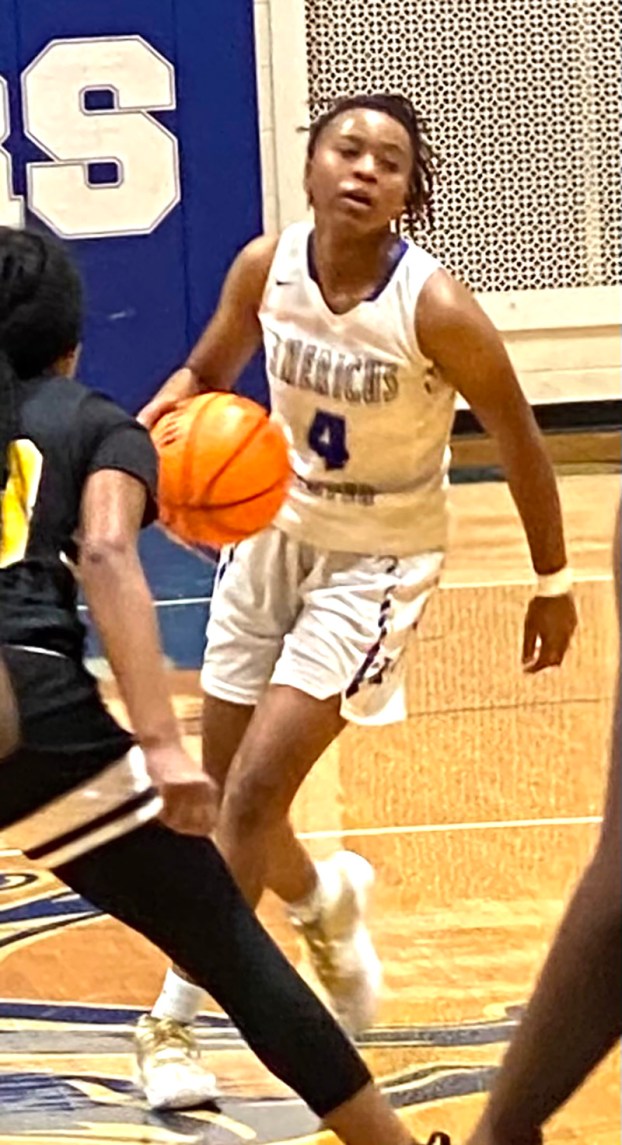 Lady Panthers rebound from loss with win over Peach County

AMERICUS – On Friday evening, January 22, the Americus-Sumter Lady Panther Basketball Team (ASHS) found itself in a highly unusual and highly unpleasant position. The Lady Panthers had just suffered a 67-39 drubbing on the road at the hands of the undefeated Lady Knights of Upson-Lee (ULHS). Fortunately for the Lady Panthers, they did not have much time to dwell on that loss, as they had to regroup for their Saturday home game against Peach County. Thanks to their ability to use their defense to force turnovers, the Lady Panthers were able to go on a 6-0 run against PCHS early in the fourth quarter. That run eventually led to total domination by ASHS and a 45-29 win over the Lady Trojans. 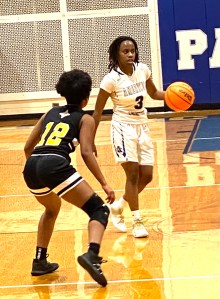 ASHS Head Coach Sherri Harris told the Americus Times-Recorder that in their loss to the ULHS Lady Knights the night before, her club did not play well in the second half due to a slow start and to ASHS senior forward Trinity Jackson getting into foul trouble. As far as the game against the Lady Trojans on Saturday, January 23, Harris stated that even though some of her guards got into foul trouble, the team was able to overcome that by getting the big lead. “Tonight, a lot of guards got into foul trouble late, but we recovered,” said Harris. “The game pretty much was over at some point, so we were able to maintain the lead.”

Aviyonna Clemons led ASHS in scoring with 19 points and both Trinity Jackson and Tiffani Goodman each scored eight points. Nyja Carson chipped in six points, Destinee Sims drilled a three-pointer for her three points and Kaylin Holley knocked down a foul shot in the winning cause. 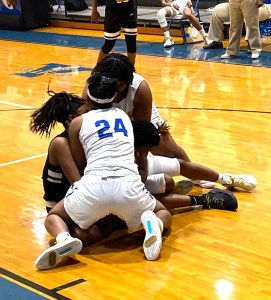 By halftime, the game was still in doubt, as the Lady Panthers only had a 23-17 lead. However, ASHS outscored the Lady Trojans 11-6 in the third quarter. By the beginning of the fourth quarter, the Lady Panthers had a 34-23 lead.

In the fourth quarter, the Lady Panthers were able to take total control of the game. They went on a 6-0 to start the final quarter by doing what they normally do: pressing their opponents full court and scoring points off turnovers. 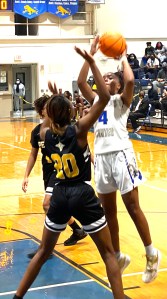 Aviyonna Clemons tries to score on the inside for ASHS.
Photo by Ken Gustafson

In addition to utilizing its full-court press, ASHS played solid defense in the half court. The Lady Panthers were also able to take advantage of poor shooting on the part of the Lady Trojans.

With a little more than four minutes left in the game, ASHS had already amassed a 43-26 lead and increased that lead to 19 on a basket by Jackson.

For the remainder of the game, even though ASHS had a comfortable lead, the Lady Panthers continued to be aggressive and finished the game strong. 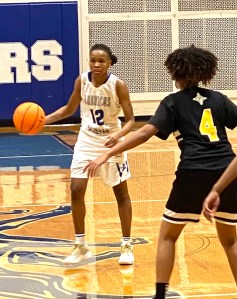 With the win, ASHS improves its overall record to 9-3 and is now in second place in the Region 2-AAA standings at 6-3. The undefeated Lady Knights of Upson-Lee sit atop the region standings at 9-0.

With the loss, PCHS drops to 7-9 overall and 3-6 in the Region 2-AAA standings. The Lady Trojans were led in scoring by Alexia Heyward with 10 points.

The Lady Panthers will travel to Jackson, GA on Tuesday, January 26, for another region contest against the Lady Red Devils of Jackson High School. Tip off is scheduled for 6 p.m.

After loss at Upson-Lee, Panthers rebound with win over Peach County

AMERICUS – The Americus-Sumter Panthers (ASHS) had their six-game winning streak snapped by Upson-Lee (ULHS) in a 60-55 Region 2-AAA... read more