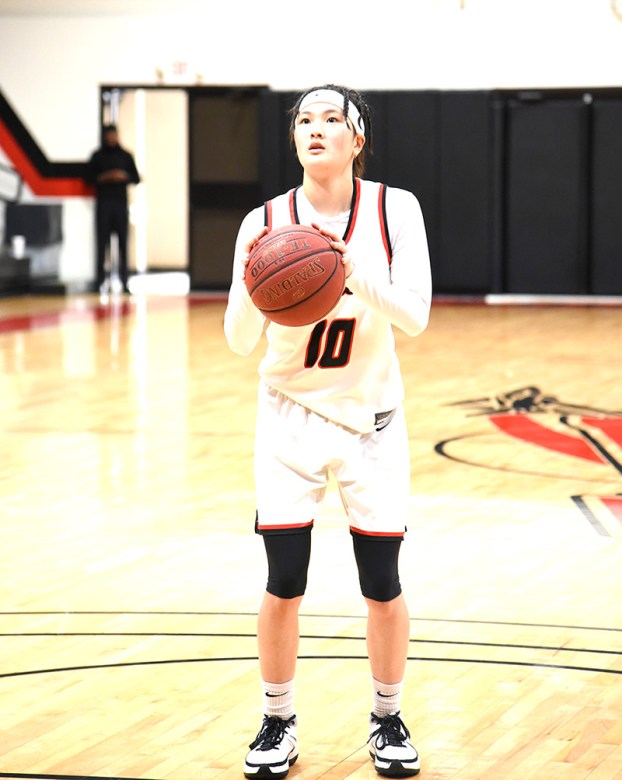 Sophomore guard Moe Shida led the Lady Jets in scoring with 14 points. She was six of eight from the foul line in the final minutes of the game to help her team take the 71 – 66 victory over the fourth ranked Shelton State Lady Bucs. Photo by Su Ann Bird

“This was a big win for us against a really good Shelton State team,” said SGTC Lady Jets head coach James Frey after his team managed to secure the victory.

“Intense” was the word Coach Frey used to describe the match-up between the two very strong teams early in the season.  “We made a lot of mistakes and honestly, this is the type of game that you would much rather play later in the year, but with the COVID-19 changes, we ended up playing Shelton State as our third game of the year,” said Frey.  “I am very proud of the intensity that the Lady Jets displayed, but I also see a lot of room for improvement.  If we want to be a top team, we have got to continue to improve every game.”

The Lady Jets are well aware that the Lady Buccaneers will be after them for revenge on Sunday, January 31st, when the two teams meet for a rematch at 1 p.m. CST in Tuscaloosa, AL.  SGTC has one scrimmage game before that match-up.  The Lady Jets will play a non-conference scrimmage at home against Albany Tech on Wednesday, January 27th at 5:30 p.m. in the Hangar and fans will be able to attend.

Last season, SGTC depended on the strong three-point shooting of its sophomore guards. Coach Frey stated that his guards will need to step up this season for the Lady Jets to be successful. That is what he got from his club last Sunday afternoon.

Sophomore guard Moe Shida from Hokkaido, Japan, led the Lady Jets with a total of 14 points.  She made six of eight free throws in the final minutes of the game to allow South Georgia Tech to hang on to their lead.  She also added eight points from the floor.

Sophomore guard Imani McNeal from Locus Grove, GA, was right behind Moe in the scoring department.  She had a total of 13 points including three three-pointers and two field goals.  Sophomore forward Hope Butera of Kigali, Rwanda, was the only other Lady Jet in double-digits with 12 points.  She made three of four free throws in the fourth quarter and had nine other points. Ten of her points came in the second half.

The Lady Jets scored the first basket of the game but within a little over two minutes, Shelton State had tied the game and pulled ahead by as many as seven points.  Shelton State kept that lead until the last three minutes of the first quarter when South Georgia Technical College came back and tied the game at 13 – 13.  The lead swapped back and forth during the final minutes of the first quarter and it ended tied at 18 – 18.

SGTC scored first again in the second quarter but Shelton State rallied to pull ahead by as many as four points in the first two minutes.  South Georgia Technical College closed the gap and went up by three points before finally going into the half up 32 – 31.

Shelton State scored the first bucket in the second half and had the lead until SGTC came back and went ahead 39 – 37 with 7:56 remaining in the third quarter.  The Lady Jets went ahead by as many as seven points before taking a 56 – 48 lead into the final quarter.

SGTC was able to maintain a narrow lead for most of the fourth quarter and was up 69 – 60 with 2:13 remaining on the clock.  Shelton State made a late run, but free throws allowed the Lady Jets to secure the 71 – 66 victory.

“We missed several critical free throws late in the fourth quarter,” said Frey.  “We know that we need to improve on that as the season advances.”  He thought his team played with intensity but missed a lot of easy baskets and made some mental mistakes.  “It was a good win for us and I saw a lot of things I was pleased with.  However, there is always room for improvement and that is what we will be working on this week as we prepare to face Shelton State again on Sunday.”

The Lady Jets are now 3 – 0 on the season and will host Albany Tech in a scrimmage on Wednesday, January 27th at 5:30 p.m. in the Hangar.  The Jets are on the road this week.  They take on Chipola College in Marianna, FL at 7 p.m. (CST) on Tuesday, Jan. 26th; Northwest Florida College in Niceville on January 27th, and USC Salkehatchie in Walterboro, SC on Saturday in Walterboro, SC.

Lady Panthers rebound from loss with win over Peach County