She has character! And worm holes! 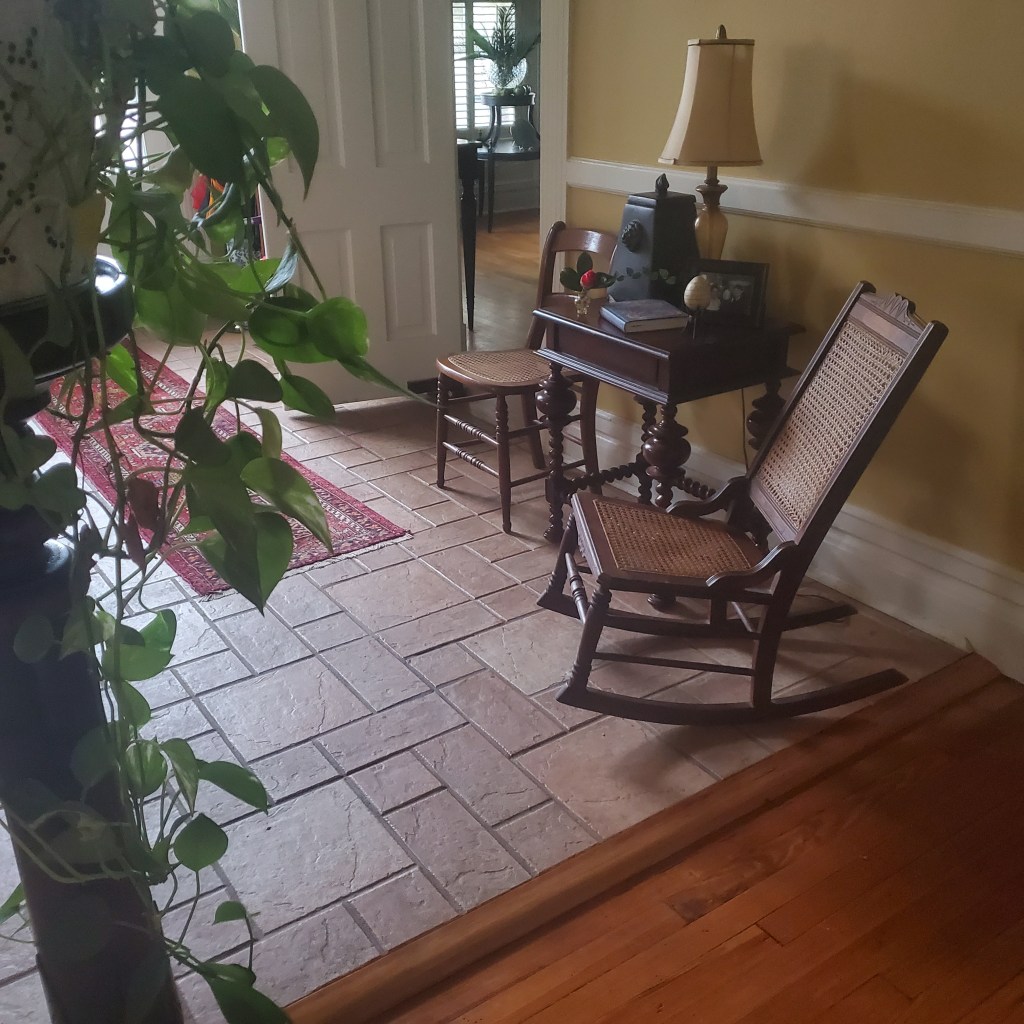 Transition. I did not know what to call it, and I am not entirely sure “transition” is the right word, but for my purposes it has come to be the perfect term. I needed a transition. When remodeling my home, my men busted through some tile, a subflooring, a preexisting linoleum and finally, in all her glory, was a pine wood floor who was longing to be seen. I was thrilled. There was one issue. The pine in my hallway and the tile in my kitchen didn’t line up. All the prep for the tile had left a 1.5 inch drop and on my best days I would just avoid stubbing my toes, on my worst, my heels would catch, and I’d find myself trying to avoid planting my face in places a face shouldn’t be planted. What I needed was something to make the transition easier. Something to make the transition smoother, and if given the choice, something that would melt right into my original flooring, allowing my heels to never to get caught on this mini danger again.

I have been living with this issue for 6 years now. I had gone blind to the fact there was a transition missing. But there is this man, Matt, at my house and he has tools and skills. I am a woman; I have limited tools and I have zero skills. However, one of the skills I have is knowing a good thing when I see it, and so I totally took advantage of Matt. He assessed my lack of transition and immediately called it an easy task. He quickly told me he would find a piece of wood and have my issue taken care of immediately. Well, at this, I gave a silent “woot! woot!” and carried about my day. Except it dawned on me. As we know, I am a sentimentalist and if given the choice, I want everything in my home to tell a story. This transition was no different. I thanked Matt for his generosity in volunteering his personal stock of pine to my endeavor, but I had another option.

Daddy used to have a shed full of heart pine. He has built and built, and the supply has dwindled to small numbers and the quality pieces had gone first, but I wanted a piece of my family’s home in my home. I wanted something I could say came from the “old homeplace” like my old homeplace was a bygone memory. I wanted to look at it and be reminded of my roots and my story. Matt liked this idea and we met Daddy under his shed in search of the perfect piece of pine to bring to town. The men were really good at pulling options, I was really good about which ones grabbed me in the gut and sang a little song to my soul. We went through a few. The men and I found one. Matt looked at me and asked without words if it was a thumbs up or down. I was pleased to say, “oh yeah, that’s it!” I should make clear this piece of wood chose me, I simply said, “time for you to come on home.” Matt loaded her up, dropped me at my house and took her on home to his shop. I thought about her a lot that night.

Finally, the next afternoon, taking a risk Matt would find me only 56% insane, I texted him to say, “I have one wish. I want you to leave that wood as pure and unadulterated as possible. I want it to remind me of my Daddy and his shed.” Matt didn’t immediately respond, so I started to question if I was indeed closer to 75% insane. Eventually he sent over a picture. She was still rough, but she was already a beauty. Her grain and natural color were perfect. I told Matt I adored her, and he kept working. She would be the perfect transition for me. A little later I got a text from Matt telling me the transition has “tons of character, including little worm holes.” Those words were poetry. And I don’t mean about hallway transitions, I mean about life transitions.

I want it to be said of me that I am “full of character including little worm holes.” In graduate school as a blooming therapist, we quickly learn that transitions are the most stressful times in life. Leaving home, living alone, getting married, having children, having people enter the family system, having people leave the family system, seeing children off, empty nest and death are all the beautiful things of life, but they are the transitions that bring stress. Very few of us get through them without having a mark left. Sometimes it is a beautiful mark, making our grain richer and grow in beauty. But sometimes, the worms creep in and start to take up home.

In my life, I have put a lot of energy into hiding my worm holes. I have made progress at embracing my worm holes over the years, sometimes even taking pride in the fact I didn’t let the worm have its way and completely set up house. But it is still hard. I am more transparent with my worm holes than I used to be, but it is still a challenge to embrace them. But Matt, unknowingly, with his words on transitions, caused me to pause. I want that! I want to have said of me I am rich in character, not despite my worm holes, but because of them. Who doesn’t? Aren’t we all most real when we learn to love our crazy? Aren’t we the most real when we look at our little imperfections and see them as character? Aren’t we real when we consider others have their worm moments and, in the end, we see their beauty? Some of us will never become real. Some of us are too brittle, too scripted, too afraid to ever admit there are places where the worms have eaten. Those folks carry a large burden. I’ve been that person. It took time to say, “that’s my scar and she’s a beauty!” It has taken a long time to know what I need to accept and what I need to find courage to keep working on. But I am willing. I am often my strongest when I admit I am worm eaten in certain places. I am my wisest when I learn what to keep repairing and what to celebrate as my character. Secrets used to be my thing. I came to learn recently we are only as sick as our secrets. That doesn’t mean I go tell everybody where I am crazy, or afraid, or damaged, but it does mean I can trust myself to tell just the right person were my worms are. And you know the response? Much like Matt spoke of the transition, I hear, “Tracy, you have tons of character, you even have little worm holes!”

My wish for us—we see our worm holes as what has made our transitions, our journeys, beautiful. I wish for us a character full of stories, both good and challenging. I hope we see our courage. I hope we see our times with the worms as worth it. From one transition to another, may they be beautiful in their own way. May we say of ourselves, “Tons of character, even have little worm holes!

Clawfoot has a story to tell