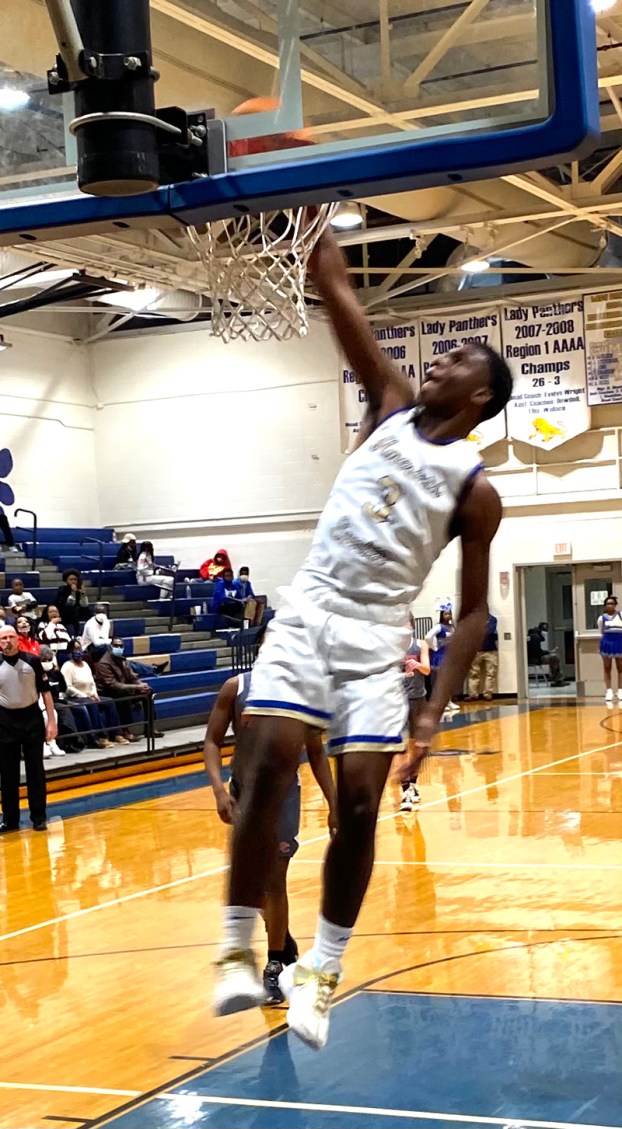 AMERICUS – About a month ago, the Americus-Sumter Varsity Boys Basketball Team (ASHS) bludgeoned Pike County 86-6 in Zebulon. It was total domination from start to finish and was possibly the most lopsided victory in ASHS boys’ basketball history. However, in the rematch against the winless Pirates (0-13) on Tuesday, February 2, the Panthers actually found themselves in a tight ball game in the first quarter. PCHS, however, had awoken a sleeping giant. From the beginning of the second quarter until the end of the game, the Panthers rediscovered their ability to dominate. They started playing Americus-Sumter basketball, and after leading by just four points at the end of the first quarter, ASHS outscored the Pirates 73-35 the rest of the way en route to a 92-50 rout of PCHS.

“My guys came out not ready to play,” said ASHS Head Coach Johnny Genwright. “I told them to expect the other team to come out and play hard. They were not going to give us the game, so our guys came out somewhat lukewarm. After the first quarter, after I spoke with them, they got it together. They started moving on defense. They started moving the ball, especially in the second half. They started moving on defense like they were supposed to. They shared the ball really well and had a lot of assists. There were a lot of good things that I saw tonight that we are working on as far as playing as a team. They did a great job of that.” 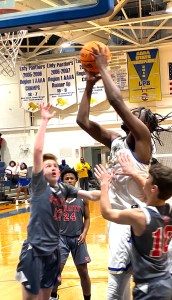 Americus-Sumter sophomore forward Canaan Jackson goes up for a basket. Jackson scored five points in the win over the Pirates.
Photo by Ken Gustafson

Though his club has gotten off to slow starts before, Genwright was not really concerned about that. He chalks up the slow starts as an example of his team playing to the level of its competition. “I didn’t scare me,” said Genwright. “I knew we’d get it together and that’s what they did. They picked it up. It was a good test for them (ASHS) letting them know that we can’t underestimate a team. We’ve got to come out ready to play every game.” 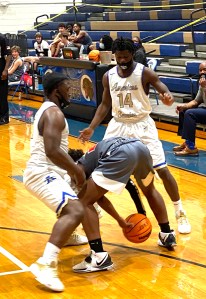 Four ASHS players scored in double figures in this game. Keldrick Flemming led all scorers with 24 points and Darian Mitchell poured in 18. Both Kyric Davis and John Monts each scored 12 points and Cameron Evans came close to scoring in double figures, as he chipped in eight points.

With the win, the Panthers improve their overall record to 13-3 and are still in first place in the Region 2-AAA standings at 10-1. 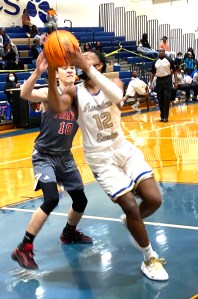 Americus-Sumter senior guard John Monts tries to score while being defended by Matthew Haver of PCHS. Monts scored 12 points in the win over the Pirates.
Photo by Ken Gustafson

Three players scored in double figures for PCHS. Sylas Watts led the Pirates in scoring with 20 points, Amari Willis scored 12 and Ashton Maddrey chipped in 10 in the losing cause.

The Panthers jumped out to a 6-2 lead to start the game, but unlike the last time these two teams met, the Pirates stayed in the game throughout the first quarter. The Panthers were not able to force PCHS into committing as many turnovers as last time and PCHS, thanks to the scoring of Watts, was able to stay within striking distance. At one point, ASHS only led 19-15. During this time, the Panthers also struggled with committing turnovers, which helped PCHS stay in the game. 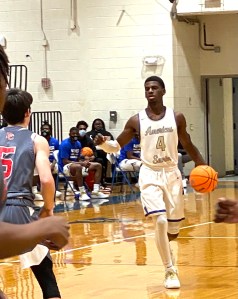 Nevertheless, ASHS was able to increase its lead to 33-20 on a layup by Mitchell with a little over three minutes left before the half.

Over the next 30 seconds, the Panthers would score four more points to take a 17- point lead. From that point on, the Panthers started to put a stranglehold on the game. They went on a 6-2 run during the final minute of the half and that run was capped off with a one-handed dunk by Kyric Davis. The Panthers were making it known that even though they had gotten off to a slow start in this game, they were now firmly in control, leading 43-24 at halftime.

During the first two minutes of the third quarter. It was as if a sleeping giant had been awoken from its deep slumber. The Panthers came out of the gate hungry. They went on a 14-5 run, which included a dunk by Flemming that electrified the small crowd gathered in the Panther Den. The rout continued through the remainder of the third quarter. Unlike the first quarter, the Panthers were able to use their full-court press to force turnovers and turn them into points, which is a staple of ASHS Basketball. 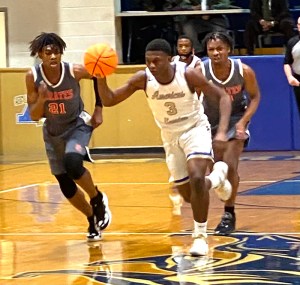 Keldrick Flemming pushes the ball up the court for the Panthers.
Photo by Ken Gustafson

On one of those turnovers, Flemming scored on another one-handed dunk. By that point, ASHS was up by at least 30 points and looking for more. The Panthers continued to pour it on during the waning minutes of the third quarter and by the quarter’s end, they led PCHS 77-38.

Even with the massive lead, ASHS did not stop its aggressiveness in the fourth quarter. The Panthers began the final quarter by scoring six unanswered points to take an 83-38 lead. The Pirates were able to respond with a 7-3 run of their own, which was capped off by a jumper from Watts. However, it was way beyond academic at this point, as the Panthers would go on to win 92-50. 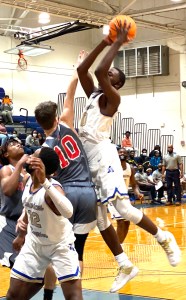 Kyric Davis goes up to score against Matthew Haver of PCHS.
Photo by Ken Gustafson