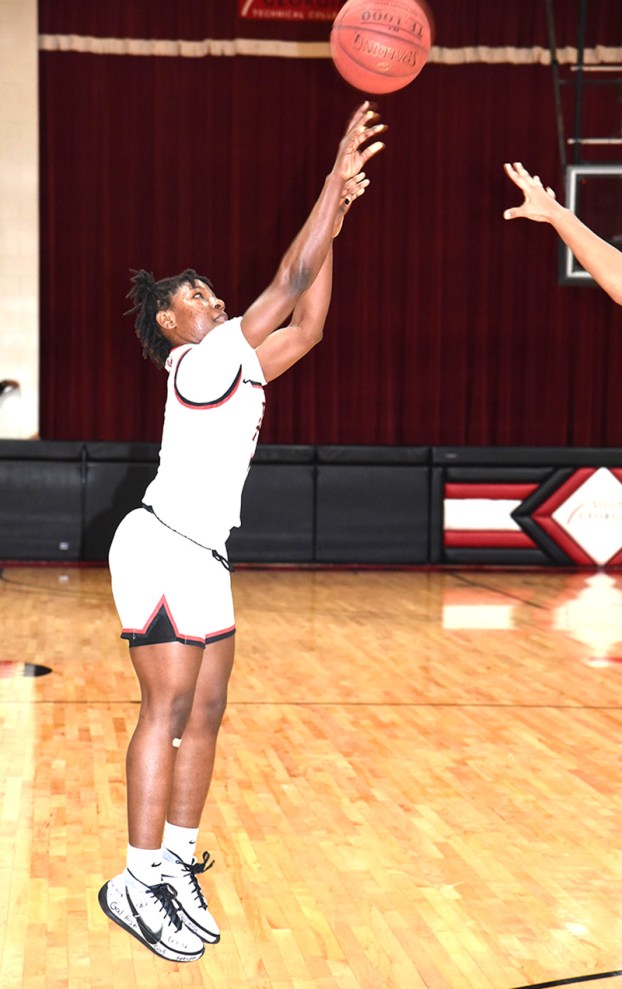 SGTC sophomore guard Veronica Charles (4) led the Lady Jets in scoring against Andrew College with 23 points. She was five of seven from the three-point line. Photo by Su Ann Bird

AMERICUS – South Georgia Technical College sophomore point guard Veronica Charles came off the bench to score 19 points in the first half, more than the entire Andrew College Fighting Tigers in the same time frame, to lead the undefeated Lady Jets to their seventh straight win, 90 – 52.

Charles ended with a total of 23 points on the night to lead the Lady Jets to their second consecutive Georgia Collegiate Athletic Association (GCAA) conference decision.  SGTC is currently ranked fourth in the nation and is now 7 – 0 overall.  Charles was five of seven from the three-point line, eight of 11 from the field, and two of three from the foul line.  She also had six rebounds, seven assists and five steals.  This was the third time in seven games she has scored over 20 points.

“We got off to a great start against Andrew College,” said South Georgia Technical College Athletic Director and Lady Jets head coach James Frey.  “It seemed like everything we threw up in the first quarter and first half went in and our defense kept them from responding.  But we went cold in the third quarter and they came back.”

The Lady Jets were up 56 – 18 at the half and outscored AC 35 – 5 in the first quarter.  It was late in the second quarter before the Fighting Tigers reached double-digits. AC came out in the third quarter and outscored the Lady Jets 20 – 17, but the SGTC responded in the fourth quarter and finished the game by outscoring AC 17-14 to capture the 90 – 52 victory.

Joining Charles in double-figures scoring on the night were Imani McNeal, Moe Shida and Hope Butera.  Sophomore guard Imani McNeal ended the night with 14 points, seven rebounds, five assists and one steal.  Sophomore guard Moe Shida and sophomore forward Hope Butera both had 10 points on the night.  Shida came up with three rebounds, four assists, and one steal.  Butera had six rebounds.

Fans will have the opportunity to watch Jets at home when they return to the Hangar in a rematch against USC Salkehatchie at 3 p.m. on Saturday, February 6th.   The Lady Jets will host Central Georgia Tech on Tuesday, February 9th at 5:30 p.m. and then the Jets will play them in the Hangar on Thursday, Feb. 11th at 7 p.m.  The two teams will both play at home on Saturday, February 13th.  The Lady Jets host Central Georgia Tech at 1 p.m. and the Jets take on Andrew College at 4 p.m.

Sumter Cycling to host three rides and its annual meeting this Saturday at Jackson St. Depot