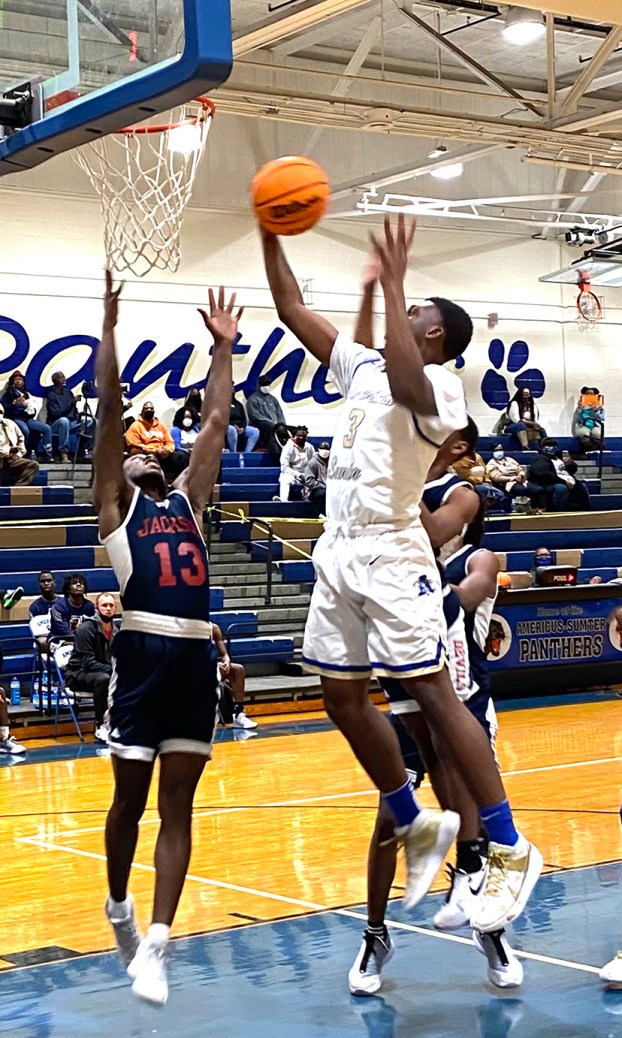 Americus=Sumter senior forward Keldrick Flemming goes up to score on the inside against Jackson HS. Flemming led the Panthers in scoring with 15 points. Photo by Ken Gustafson

AMERICUS – After their exciting and memorable 77-52 victory over Mary Persons on Senior Night the night before, the Americus-Sumter Varsity Boys’ Basketball Team (ASHS) came into Saturday’s regular season finale against Jackson ready to finish the regular season with a victory and use that as momentum going into next Thursday’s Region 2-AAA semifinal game. Having lost by 30 to the Panthers in their first meeting, the JHS Red Devils had other ideas and went toe to toe with the Panthers in the first half. However, like they have done all season, the Panthers stepped up their defensive pressure and outscored JHS 48-38 in the second half to earn a 75-61 victory.

According to ASHS Head Coach Johnny Genwright, the difference in the second meeting didn’t have as much to do with the Red Devils’ aggressiveness, but in the amount of turnovers committed by the Panthers in this second meeting.

“When we went up there, they (JHS) were very aggressive,” said Genwright of the Red Devils. “We just stopped turning he ball over in the second half. They were aggressive tonight, but we just had a lot of turnovers right at the end. We committed a lot of fouls and that kept them at the free throw line to get points. We did let them stay in the game with the turnovers.” 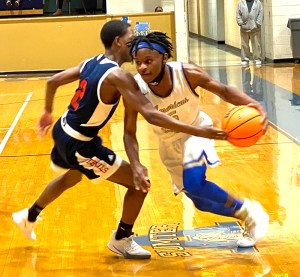 In spite of those numerous turnovers the Panthers committed, they were able to earn the victory thanks in part to four players being able to score in double figures.

Fresh off his 26-point explosion the night before on Senior Night, ASHS senior forward Keldrick Flemming led the Panthers in scoring with 15 points. Kyric Davis was the next highest scorer with 12 points. Darian Mitchell scored 11 and Cameron Evans chipped in 10 points in the winning cause. John Monts was almost in double figures for the Panthers, having scored nine points in the contest. 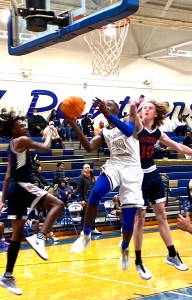 Americus-Sumter junior guard Kyric Davis drives in and scores two of his 12 points against Jackson.
Photo by Ken Gustafson

With the win, ASHS finishes the regular season with an overall record of 15-3 and finishes in first place in the Region 2-AAA standings at 12-1.

The Panthers jumped out to a 12-4 lead, which was capped off with a basket by Evans. However, the Red Devils came to Americus ready to play and they showed it by outscoring the Panthers 11-5 over the next several minutes of the first half. JHS, having been beaten by the Panthers 52-22 in the first meeting between these two teams, was playing with the resolve that such an embarrassment would not happen again.

With 3:30 to go before halftime, ASHS led 23-19, but up until the 2:39 mark when Alex Patrick scored for the Red Devils, both teams were struggling to score. Both teams were playing tough, tenacious defense, but both squads were also struggling with numerous turnovers, which negated opportunities to score.

However, one thing was clear after the first half. JHS was making a game of it and only trailed the Panthers 27-23 at the half. 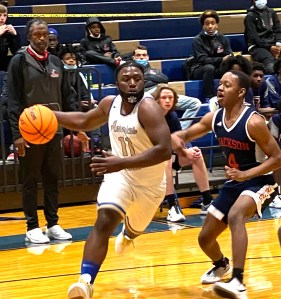 To sum up the first half, it was a half in which both teams competed extremely hard, especially on the defensive end. However, unlike the first meeting in Jackson, the Panthers were not able to generate a huge gap in the score due to the fact that the JHS defense limited scoring opportunities and played a part in the Panthers committing numerous turnovers. Throughout the first half, the Red Devils tried to press the Panthers full court, but ASHS was up to the task of breaking that press almost every time. Once the JHS press was broken, the Panthers were able to get some baskets on the inside.

However, JHS forward Cameron Edwards led his team in scoring with 13 first half points to keep the Red Devils in the game and several of those points came on made free throws. As for ASHS, Flemming led the Panthers in the first half with eight of his game total of 15 points.

Americus-Sumter forward Darian Mitchell goes up to score. Mitchell scored 11 points in the Panthers’ win over the Red Devils.
Photo by Ken Gustafson

However, things changed during the first five minutes of the third quarter. As has been the case in previous ASHS games, the Panthers started dominating on both ends of the floor. They were able to stifle the offense of the Red Devils and scored numerous transition baskets. With 2:07 left in the third quarter, ASHS led 46-31, having outscored JHS 19-8 over six and a half minutes of play. They did this by scoring via dribble penetration and by stepping up their defensive pressure to limit shots and create turnovers. As a result, while the game was not out of reach just yet,

The Panthers had a 49-37 lead going into the final eight minutes.

Over the first three minutes of the fourth quarter, both teams struggled offensively, as each team was forcing the other into committing turnovers. However, JHS guard Okemus Grier knocked down a three-pointer to put the Red Devils within 10 at 52-42. The Panthers had a response though. They went on a 7-3 run that was capped off with a dunk by Mitchell to give ASHS a 59-45 lead. 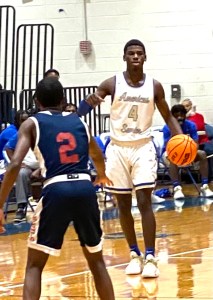 However, the Red Devils would not quit. With 3:25 to go, Luke Matthews scored on the inside to bring JHS to within 12 at 61-49. Then with less than two minutes, JHS small forward Jayden Smith scored to cut the ASHS lead to 66-56. With 1:18 left, the Red Devils were able once again to cut their deficit down to 10 at 68-58 when Matthews made one of two foul shots.

The Red Devils also had multiple players score in double figures. Cameron Edwards led them in scoring with 15 points and Tarik White had 13. Luke Matthews was also in double figures with 10 points. 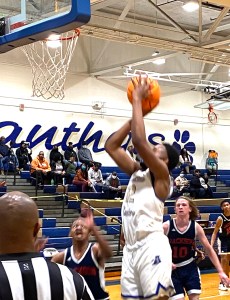 Americus-Sumter senior guard John Monts goes up and scores two of his nine points against Jackson.
Photo by Ken Gustafson