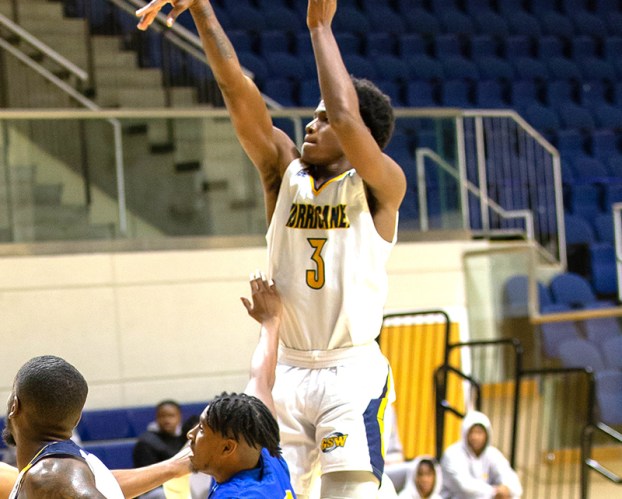 GSW freshman guard Jarrett Adderton (3) scored 10 points in the overtime period to help lead the Hurricanes to a 79-76 win over the University of South Carolina Aiken in Aiken, S.C. It is the first time in 13 years that the GSW men’s basketball team has beaten USCA in Aiken. Photo by Christopher Finn

AIKEN, S.C. – Until Saturday, February 6, the Georgia Southwestern State University Men’s Basketball Team (GSW) had to leave Aiken, South Carolina for the past 10 years with the feeling of; ‘Oh my Aiken head’. Up until this past Saturday, the Hurricanes had dropped 10 straight games to the Pacers at USCA’s Convocation Center. However, thanks to GSW freshman guard Jarrett Adderton’s 10 points in overtime, the Hurricanes left Aiken with a 79-76 victory and ended that 10 game losing streak against the Pacers at USCA.

Up until February 6, GSW was 0-13 in the Convocation Center, including postseason contests – and 0-10 as the road team in the series with the Pacers.

With the win, the Hurricanes also snapped a two-game losing streak to improve its record to 7-3 overall this season and 5-3 in the Peach Belt Conference (PBC). With the loss, USC Aiken dropped its third straight game to fall to 6-5 overall, 5-4 in the PBC.

The Pacers got off to a fast start and jumped out to an 11-point lead, 15-4, in the opening six minutes. The struggles on the offensive end continued for GSW until Kahlon Whitley knocked down a three-pointer with 7:28 left until the break to finally put the team into double digits and cut the USC Aiken lead to 18-12. Both sides picked up the scoring pace down the stretch in the first half and USC Aiken took a 35-33 lead into intermission.

Whitley sank another three-pointer with 16:27 left in the second half to give GSW its first lead of the afternoon, 42-40. From there it was a back-and-forth game until the final horn where neither side led by more than six points. GSW’s Donte Tatum made the final shot of regulation with 1:07 to play, tying the game at 67-67. USC Aiken had the ball for the final possession, but Tatum forced a turnover with three seconds remaining to force overtime.

In the extra period, Adderton took over. He made five consecutive free throws, answered with a jumper and then capped his 10-point run and clinched the game with a 3-pointer with 23 seconds to go. USC Aiken missed a pair of attempts from long range in the closing seconds to tie the game and force a second overtime.

GSW finished with a higher overall shooting percentage (43.1 percent) than USC Aiken (41.8 percent), despite struggling from beyond the arc (4 of 16). GSW saw a marked improvement at the free throw line from its last time out, and the difference had an impact on today’s outcome. GSW sank 19 of 27 attempts (70.4 percent), while USC Aiken went 10 of 16 (62.5 percent). The Hurricanes were limited to 54.2 percent accuracy at the line in their last game. On Saturday, the Hurricanes forced USC Aiken into six more turnovers, 22-16. USC Aiken led by as many as 12 points and was out in front of the Hurricanes for 62.1 percent of the game.

Tatum was the leading scorer for GSW with 23 points. He knocked down 9 of 18 shots, 5 of 7 from the charity stripe and grabbed eight rebounds. Devon Higgs pulled down a season-best 12 boards, scored eight points, had three steals and swatted three shots. Whitley chipped in 16 points. Noah Louis made 5 of 7 shots and finished with 15 points. Adderton collected six rebounds and tallied 15 points.

From Staff Reports   COLUMBUS – The Schley County Varsity Wrestling Team (SCHS) finished as the runners-up at the GHSA... read more