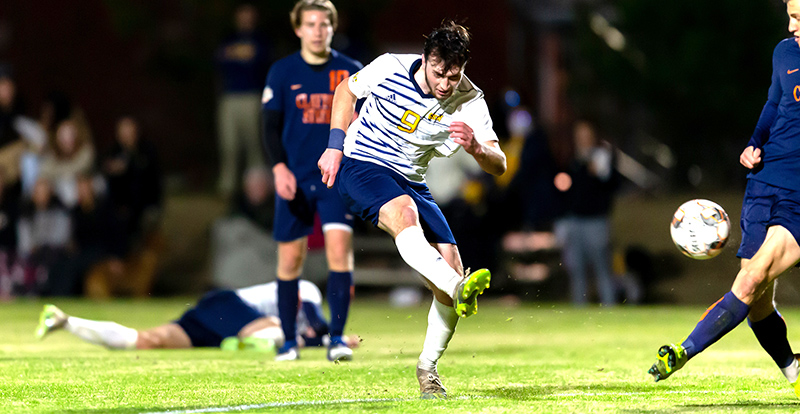 GSW freshman forward Jack Malleret scored the first goal of the Hurricanes’ 2021 spring season and drew a game-deciding penalty in the 41st minute to help lead GSW to a 2-1 victory over Clayton State in its season opener. Photo by Christopher Finn

The win was GSW’s first in the Peach Belt since 2017 and the first under second-year head coach Eric Crawford. It was only the third win (3-12) against Clayton State in the history of the program.

Malleret took a pass from J.P. Merlet early in the 18th minute, cut inside to beat a CSU defender and punched a shot off the left post that bounce in for the first goal of the season.

Matteo Landais converted the penalty kick by beating the Lakers’ keeper to the lower left corner and GSW led at the break, 2-0.

The Lakers make it interesting in the final minute of play. Their lone goal of the evening came in the 82nd minute off a corner kick from Mitro Turunen that was headed in by Mehdi Benaissa.

The Lakers outshot GSW 18-7 and controlled the advantage in corner kicks, 9-2. GSW was whistled for two more fouls, 14-12. There were seven yellow cards issued in the match.

Matteo Landais led GSW with three shots. Malleret took two. GSW keeper Mauricio Uribe made one save in the second half, but it was a clutch, diving, fully-extended stop that kept Clayton State off the board with 17:54 remaining.

The Hurricanes return to the pitch on Monday with a trip to Lander University for a match at 5 p.m.