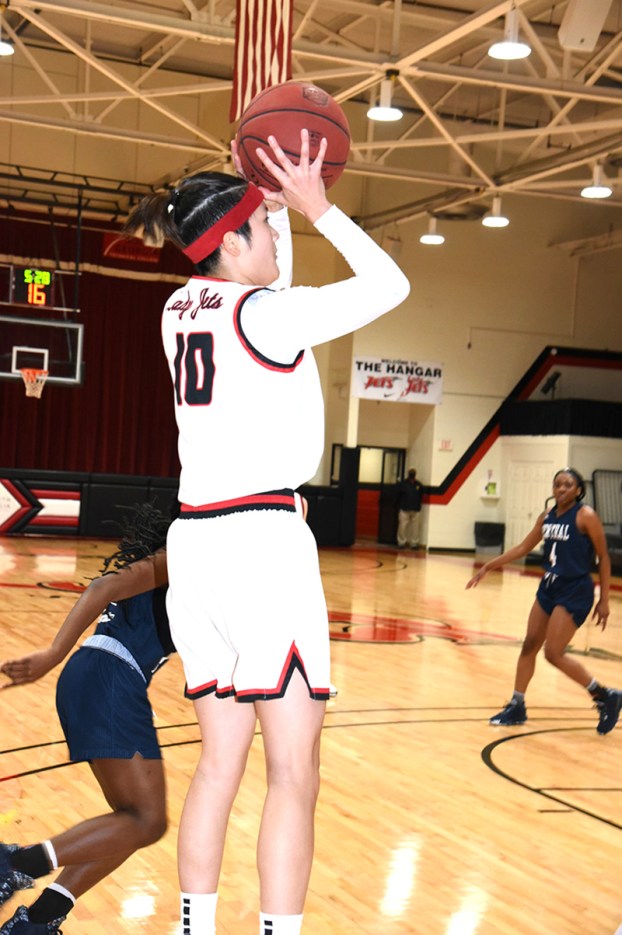 MACON – Four South Georgia Tech Jets scored in double-digits on the road to lead their team to a 74 – 60 upset victory over the 17th ranked Central Georgia Technical College Titans, who are also the three-time defending Georgia Collegiate Athletic Association (GCAA) conference champions.  Just prior to the Jets big win, the Lady Jets took care of business to move to 9 – 0 overall and 4 – 0 in the conference with 76 – 69 win over the Central Georgia Tech Lady Titans in Americus.

“It was a hard fought win,” said SGTC Jets interim head coach Chris Ballauer, after his team defeated Central Georgia Tech to move to 3 – 4 overall and 1 – 0 in the GCAA.  “We were able to make plays when we needed to.  Jalen Reynolds had a great game controlling the paint on both offense and defense.

“Anytime you can steal a game as a visiting team in our league, it is a good feeling.  It doesn’t happen often, especially against the three-time conference champions.  I am really proud of these guys and the way they have bought into what we are trying to do here, from the starters to the guys coming off the bench.  They are all buying into our culture of I.N.A.M, which stands for ‘It’s not about me,’” continued Ballauer.

“We did not play well at all,” said South Georgia Technical College Athletic Director and Lady Jets head coach James Frey.  “We have to learn to play entire games.  We play a quarter and then take one off.  There is not sense of urgency about the way we play.  It is half-hearted a lot of the time.”

The Lady Jets jumped out to a large lead and were up 26 – 8 at the end of the first quarter.  They went up by as many as 21 points in the second quarter before allowing Central Georgia Tech to close the gap to 10 points at the half, 40 – 30.  The third quarter the Lady Jets outscored Central 22 – 13 but in the final quarter, Central outscored SGTC 26 – 14 to pull within seven points in the 76 – 69 decision.

“We can’t turn the ball over 25 times and expect to win games.  Almost all of them were unforced turnovers.  We were just really careless with the ball.  We have got to be able to execute a game plan.  We go over all of the things we expect our opponents will do and what we need to do when that happens, but for some reason, we can’t take that plan and information to the game,” said Coach Frey.  “We have young ladies who are very capable but they have to buy in and do the little things it takes to be really good.”

Sophomore guard Moe Shida led the Lady Jets in scoring with 20 points on the night.  She had 10 points in the first half and 10 in the second.  She also pulled down five rebounds, four assists and five steals.  Sophomore guard Imani McNeal contributed 17 points and Hope Butera had 11 points.  McNeal also accounted for six rebounds, four assists and two steals, while Butera walked away with five rebounds and three steal

Freshman Abby Solway posted nine points, three rebounds, two assists and one steal on the night.  Niya McGuire came off the bench to put up seven points.  Maikya Simmons and Sarah Lwambo both added three points and then Flore Ngasamputu, Veronica Charles, and Femme Sikuzani all had two points.  Flore Ngasamputu also led the team in rebounds with 10 on the night.

The Lady Jets are still ranked first in the GCAA and the Jets are now tied for first place in the conference with South Georgia State College, Georgia Highlands and Andrew College with 1 – 0 GCAA records.

The Jets were led to their upset victory by sophomore forward Jalen Reynolds from Darien, GA.  Reynolds had 17 points and 12 rebounds.  He also had two assists and two steals on the night.  He was paced by Marvin McGhee who racked up 14 points and nine rebounds, Will Johnson who added 13 points, two rebounds, four assists, and one steal, and Jordan Stephens who closed out the double-digit scoring with 12 points, five rebounds, two assists and three steals.

Freshman guard Keundre Campbell from Preston, GA, came off the bench to toss in seven points, pull down four rebounds, one assist and one steal.  Kadeem Wilks added five points and then Tabais Long, Dhal Fleg, and Josh Pain all contributed two points each.