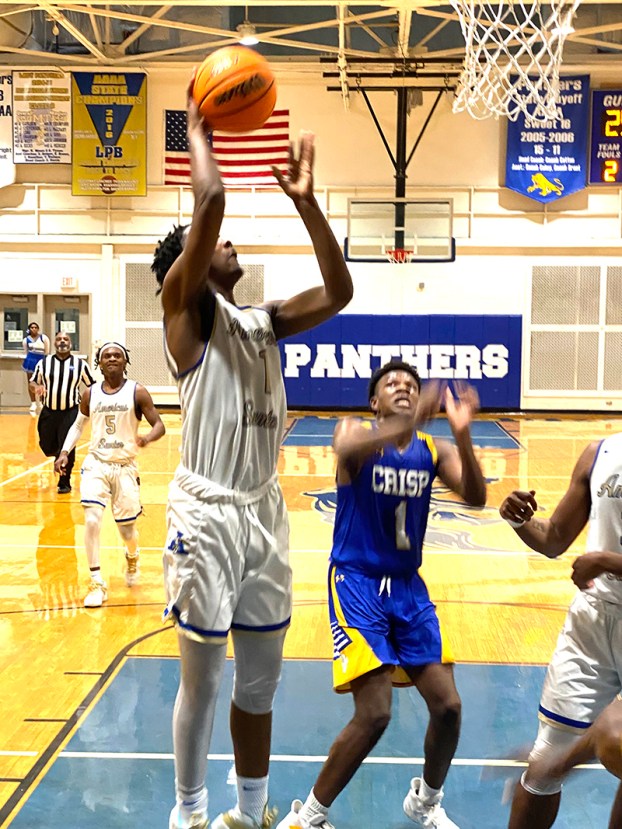 Americus-Sumter forward Darian Mitchell (1) rebounds and goes up to score. Mitchell led the Panthers in scoring with 16 points in their region semifinal win over Crisp County. Photo by Ken Gustafson

Second half awakening vaults Panthers to victory in region semifinal

“They (CCHS) came out in a zone. I told my guys that they had to make shots,” said ASHS Head Coach Johnny Genwright. “We had to make shots. We didn’t make them in the first quarter, but in the second quarter, we had some young guys come up and knock down some three-point baskets, which put us back in the ball game. I told the guys at halftime to settle down, be patient, come out and knock down shots and they will come out of that two-three zone, which they did.”

With the win, the Panthers improve to 15-3 overall on the season and they will face Upson-Lee in the region championship at ULHS in Thomaston on Friday, February 12, at 7:30 p.m. 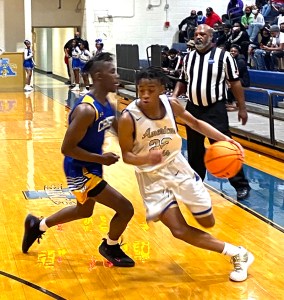 Americus-Sumter guard Brandon Pope (22) hit two three-pointers in the second quarter to get the Panthers back in the game. Pope scored eight points in the win over the Cougars.
Photo by Ken Gustafson

Darian Mitchell led the Panthers in scoring with 16 points and Keldrick Flemming scored 15. Jordan Wiley had 10 points on the night and both Cameron Evans and Kyric Davis each chipped in eight points in the winning cause.

The Panthers got off to a slow start in the first quarter, as the Cougars jumped out to a 9-0 lead. ASHS struggled in its half-court offense against the two-three zone defense of the Cougars. The Panthers were unable to get any shots to fall and they committed several turnovers. This enabled the Cougars to jump out to the early lead. ASHS didn’t crack the score sheet until Cameron Evans knocked down a three-pointer with about three minutes left in the first quarter to cut the deficit to 9-3. For the moment, this seemed to wake up the Panthers, but they still continued to struggle scoring and with turnovers. As a result, ASHS trailed the Cougars 14-7 by the end of the first quarter. 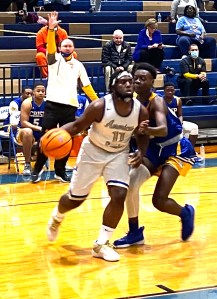 As has been typical of late with the ASHS team, the Panthers came alive in the early part of the second half. They went on a 7-0 run to take a 30-23 lead. During the next couple of minutes, Darian Mitchell was able to score four straight points to give ASHS a 36-27 lead. Then with 3:18 to go in the third quarter, John Monts scored on the inside to give ASHS an 11-pont lead. While the Panthers were finding their offense during this part of the game, the Cougars were going cold from the field, which was partly due to the ASHS defense. By the end of the third quarter, ASHS had a 46-36 lead. 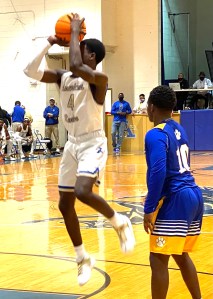 During the first two minutes of the fourth quarter, the Panthers began to take total control and proceeded to put the game away. They went on a 10-2 run that was capped off with a basket on the inside by Jordan Wiley. Wiley was fouled on the play, but missed the free throw. However, a technical foul was called against CCHS and Evans was able to make one of the two technical foul shots to give ASHS a 57-38 lead.

Over the next minute or so, both teams traded baskets, but CCHS guard P.J. Coleman drilled a three-pointer to cut the ASHS lead to 60-44. This was the beginning of an 8-0 run by the Cougars, as Jordan McCray would later drill a three-pointer from the corner to cut the ASHS lead to 60-49 with 2:58 left. With less than a minute left, the Cougars were able to cut the lead down to nine at 66-57, but that would be as close as they would get. The Panthers were able to weather that last minute push from the Cougars to hold on and win 71-59. 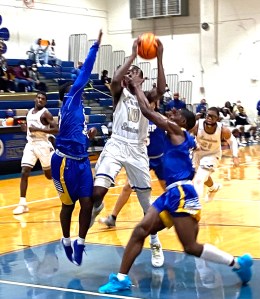 Coach Genwright believes that his club is primed and ready to make a run in the state playoffs, but wants to take it one game at a time. “We’ve still got work to do. Each day, we’ve got to get 1 percent better,” said Genwright. “It is just one game at a time right now.”

The Panthers will travel up to Thomaston on Friday, February 12, to take on the Knights of Upson-Lee in the Region 2-AAA Championship Game. Tip off is scheduled for 7:30 p.m.