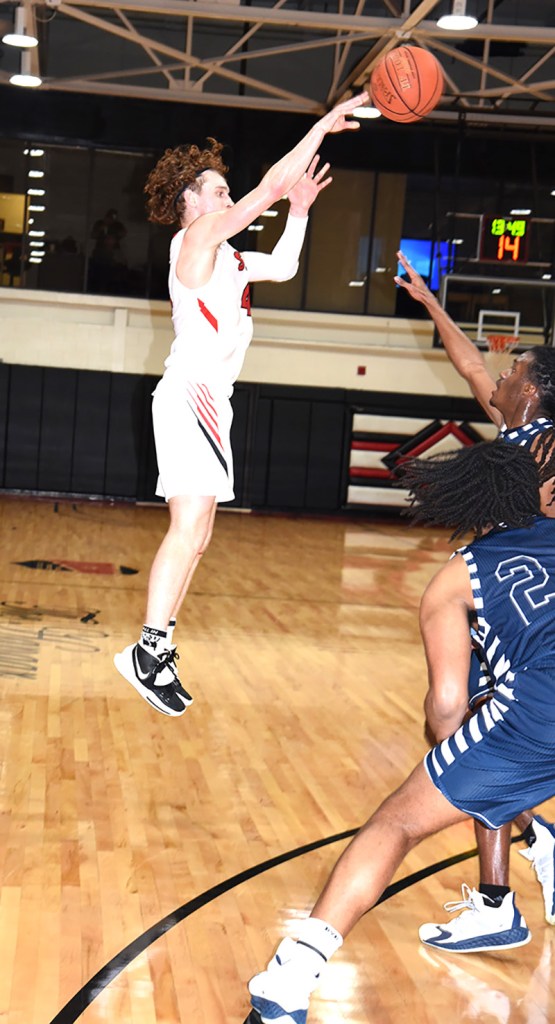 “It’s still a work in progress and to have an off game and still win against a really good team is always good,” said South Georgia Technical College Jets interim head coach Chris Ballauer, after his team managed to upset Central Georgia Tech 64 – 56 in their second head to head contest this week.  “Jalen Reynolds and Will Johnston had big games on offense and that really helped us to win.  But the defensive plays by Tabias Long, Marvin McGhee, and Jordan Stephens helped us to close the game out.  Radim Havel came off the bench and gave us some really good minutes.”

And while Chris Ballauer was praising his players for turning up the heat on offense and defense, Lady Jets head coach James Frey said his team is still struggling despite being ranked 4th in the nation and first in the GCAA with a 10 – 0 unbeaten record this season, including the 70 – 61 win over the Central Georgia Tech Lady Titans in Macon.

“We have to figure out a way to cut our turnovers in half,” said SGTC Athletic Director and Lady Jets head coach James Frey.  “The past two games we’ve really struggled with valuing the basketball.  I am trying to get our team to understand how important that is.  We also have to finish at the basket.  We missed 21 shots within six feet tonight.

“I realize it is a mental focus thing.  But we’ve got to keep working and push through this little slump we are in.  The great thing is that as bad as we’ve been, our players realize it and are working hard.  We are 10 – 0 and our goal is still in front of us.  We just have to keep working and we will,” added Frey.

Both Frey and Ballauer said that the shortened season and the restrictions brought on by COVID-19 are creating some challenges.  “Playing three games a week is a task for everyone,” said Coach Ballauer.  “We played last weekend and then played Tuesday and Thursday and will take on Andrew College here Saturday.”

Despite turning over the basketball 24 times against the Central Georgia Technical College Lady Titans, the Lady Jets were able to maintain their 1st place GCAA ranking and move to 5 – 0 in the conference and 10 – 0 overall.

Only one member of the Lady Jets scored in double-figures.  Sophomore Niya McGuire led SGTC with a double-double performance.  She had 13 points and 10 rebounds.  She led the Lady Jets in both categories.  Sophomore guards Imani McNeal and Moe Shida were the next players close to double-figures with nine points each.  McNeal had five rebounds and two assists and Shida had five assists and one steal on the night.

Sophomore forward Hope Butera closed out the night with eight points.  She also added five rebounds, one assist, one steal and one blocked shot.  Freshman guard Abby Solway and sophomore guard Veronica Charles both added six points each.  Solway also accounted for two rebounds and two assists, while Charles pulled down seven rebounds, had one assist and four steals.

Flore Ngasamputu scored four points and managed to secure four rebounds.  Jaidyn Trevino and Tena Ikidi both came away with three points and then Sarah Lwambo and Femme Sikuzani closed out the scoring with two points each.  Sikuzani had seven rebounds and three blocks.

And while the Lady Jets were finalizing their victory in Macon against the Central Georgia Tech Lady Titans, the Jets were taking care of business in the hangar in Americus.  The Jets scored first and managed to take a 29 – 23 lead into the half, but there were four lead changes and two ties in that first 20 minutes.  Six points was the Jets largest lead in that half when then went up 6 – 0 early.

Freshman point guard Will Johnson led the Jets in scoring with 21 points on the night.  He was perfect (2 for 2) from the three-point line and the foul line (3-3).  Fourteen of his points came in the second half.  He also ended the night with seven rebounds, two assists, and two steals.  Sophomore forward Jalen Reynolds also had a good night offensively.  He had 15 points and eight rebounds.

The game was a defensive struggle for the entire 40-minutes.  Sophomore guard Jordan Stephens did a good job defensively and he also put in 10 points on the night.  Freshman Marvin McGhee had five points, six rebounds, one assist and three steals.  He was followed by freshman forward Radim Haveland freshman guard Dhal Fleg who both contributed four points each and two rebounds each.  Freshman Keundre Campbell walked away with three points and then Tabais Long and Joshua Pain closed out the scoring with one point each.