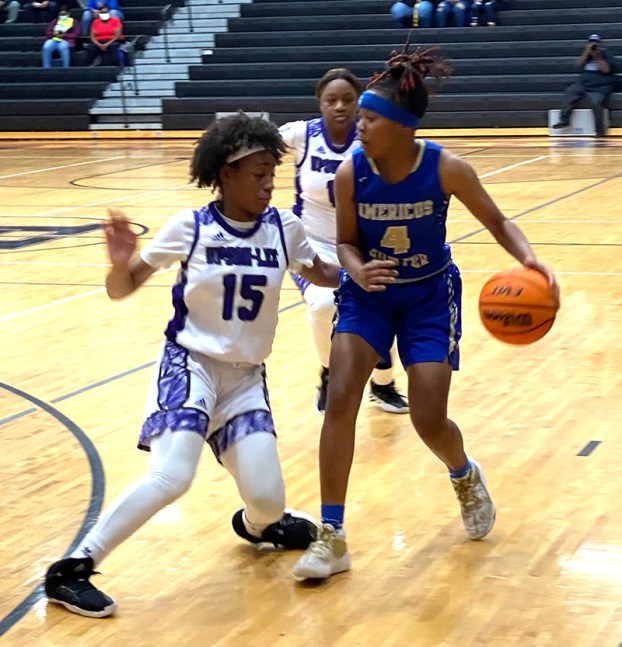 THOMASTON, GA – Coming off their 64-37 thrashing of Pike County in the semifinals of the Region 2-AAA Tournament the night before, the Americus-Sumter Lady Panthers (ASHS) traveled up to Thomaston ready to do what no other Upson-Lee opponent has done this season: defeat the undefeated Lady Knights. However, though they competed extremely hard, the Lady Panthers had difficulty stopping the ULHS offense and struggled with turnovers. ASHS also had difficulty getting offensive rebounds. As a result of these factors, coupled with the fact that ULHS made it to the free throw line more than twice the amount of times the Lady Panthers did, the Lady Knights went on to win 59-50 in the Region 2-AAA Championship Game on Friday, February 12, at Upson-Lee High School.

With the win, the undefeated Lady Knights (20-0) are the Region 2-AAA champions and will be the #1 seed out of Region 2-AAA in the GHSA Class AAA State Playoffs, while the Lady Panthers (13-4) will be the #2 seed.  The first round games of the state playoffs are scheduled to begin Tuesday and Wednesday, February 23 and 24.

“We played hard. We made a lot of turnovers, but they (ULHS) made a lot of free throws,” said ASHS Head Coach Sherri Harris. “When you’re shooting 31 and you’re making 20 something, you’re supposed to win. I think we might have shot 14 or 15 free throws.” 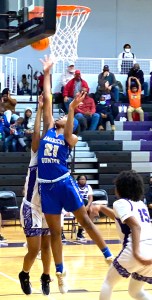 ASHS forward Trinity Jackson led the Lady Panthers in scoring with 12 points and Destinee Sims poured in 11, including three three-pointers. Nyja Carson almost scored in double figures, as she had nine points on three-three-pointers. Both Aviyonna Clemons and Tiffani Goodman also came close to scoring in double figures, as each of them chipped in eight points in the loss.

As for the Lady Knights, they had three players in double figures. Jakhia Parker and TyKeria Geiger each scored 14 points to lead ULHS in scoring and JaKera Ellerbe scored 12 points on the night. Alonzia Montgomery almost cracked the double figure scoring mark with nine points.

After one quarter of play, the Lady Panthers only trailed 14-11, but ULHS began to create some distance in the early minutes of the second quarter. The Lady Knights went on an 8-2 run over the first four and a half minutes of the quarter to take a 22-13 lead. However, ASHS struck back by outscoring the Lady Knights 7-1 over the next two minutes. That run was capped off by a three-pointer from Carson and it brought the Lady Panthers to within three at 23-20. However, ULHS struck back by outscoring ASHS 4-3 the rest of the way to take a 27-23 halftime lead.

Through much of the third quarter, however, the Lady Knights were able to go on another run and they increased their lead to 39-30 by the 1:34 mark. Then with 49 seconds to go in the quarter, ULHS forward Tyla Zellner scored, was fouled and made the free throw to give ULHS a 42-30 lead. The Lady Knights were showing why they came into this game undefeated on the season and the Lady Panthers would have to step up their game in the final quarter in order to pull off the upset. 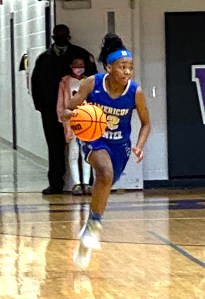 Americus-Sumter senior point guard Nyja Carson (12) pushes the ball up the court against Upson-Lee in the Region 2-AAA Championship Game. Carson scored nine points in this game, all of them on three-pointers.
Photo by Ken Gustafson

However, ASHS continued to struggle scoring and had some breakdowns on the defensive end, which allowed the Lady Knights to score some easy baskets. As a result, with 5:34 left to play in the game, the Lady Panthers found themselves trailing 50-32.

ASHS tried to fight its way back into the game by pressing full court, but the ULHS guards were able to break that press. Nevertheless, with a little less than three minutes to play, the Lady Panthers got baskets from Trinity Jackson and Sims and were able to cut their deficit to 51-41. Then with 2:16 to go, Carson drilled another three-pointer to cut the ULHS lead to 53-44. In spite of their struggles, the Lady Panthers were still in striking distance with enough time left.

However, that late surge from ASHS would not be enough. The Lady Knights were able to hit their free throws down the stretch to seal their 59-50 victory and the region championship.

As the #2 seed out of Region 2-AAA, the Lady Panthers are assured of hosting their first round game in the GHSA Class AAA State Tournament on either Tuesday or Wednesday, February 23 or 24. They will play the #3 seed out of one of the other regions. Stay tuned to the Americus Times-Recorder for updates on the day, time and opponent.