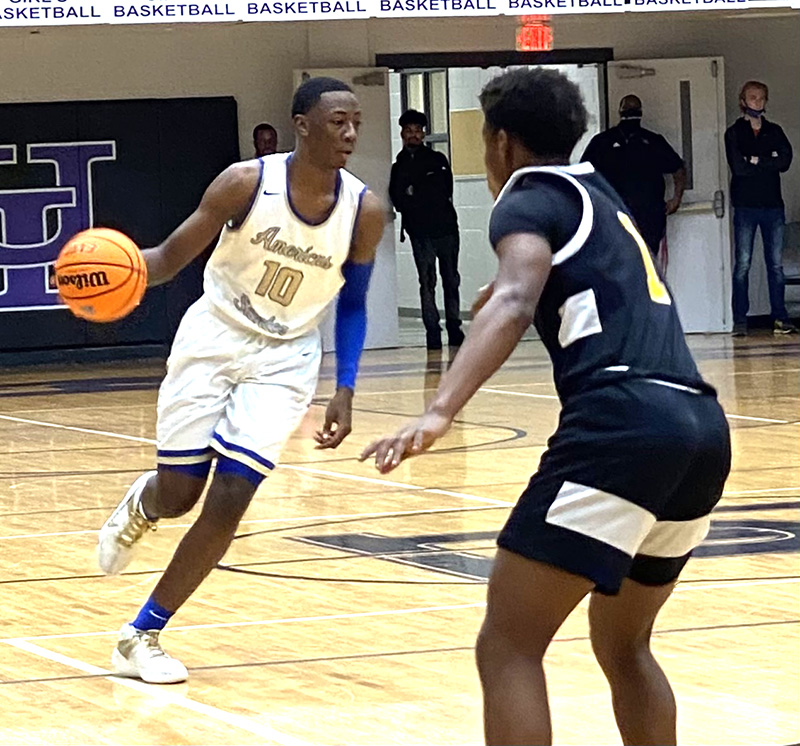 Americus-Sumter junior small forward Kyric Davis (10) pushes the ball up the court in the region championship game against Peach County. Davis scored two points in the loss to the Trojans. Photo by Ken Gustafson

THOMASTON, GA – It has been said that it is tough to beat a good team three times in a row in the same year, which is what the Americus-Sumter Varsity Boys’ Basketball Team (ASHS) was trying to do to Peach County (PCHS) in the finals of the GHSA Region 2-AAA Tournament at Upson-Lee High School on Friday, February 12.  However, the Trojans were on a roll. They had just pulled the upset over second-seeded Upson Lee on the Knight’s home floor the night before and were poised to pull off an even bigger upset against the top-seeded Panthers. As far as ASHS was concerned, they had taken care of Crisp County 71-59 in their semifinal game and came to Thomaston expecting to defeat PCHS for the third time this year and win the region championship. However, due to numerous turnovers and a lack of execution on offense, which were both in part caused by the tenacious PCHS defense, the Panthers were not able to overcome a double-digit deficit and fell to the Trojans 63-53 in the Region 2-AAA Championship Game.

“We had a bunch of turnovers. We turned the ball over too much and we couldn’t put the ball in the basket,” said ASHS Head Coach Johnny Genwright. “We didn’t execute tonight. Turnovers killed us. That’s what happens when you have turnovers.” 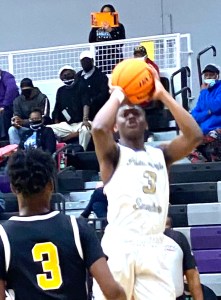 Americus-Sumter senior forward Keldrick Flemming (3) led the Panthers in scoring with 15 points in their loss to Peach County in the Region 2-AAA championship Game.
Photo by Ken Gustafson

Once again, ASHS senior forward Keldrich Flemming was the leading scorer for the Panthers with 15 points. Freshman point guard Cameron Evans was also in double figures with 11 points and senior forward Darian Mitchell chipped in eight points in the losing cause.

After an evenly played first quarter, the Panthers only trailed the Trojans 12-10, but PCHS went on a 10-4 run in the second quarter, prompting Genwright to call a timeout with 5:47 left in the first half. During this part of the game, the Panthers were struggling to score in their half court offense and were committing turnovers that resulted in fast break baskets for the Trojans.

However, in the waning minutes of the half, the Panthers came to life. They went on a 7-0 run that was capped off by a three-pointer from Flemming to cut their deficit to 24-21. The Trojans were able to strike back a few seconds later with a three-pointer by Ladarius Johnson, but ASHS would go into the locker room at halftime only trailing 29-23.

Flemming scored nine of his game total of 15 points to lead the Panthers in the first half, while Temarius Mathis led the Trojans with seven first half points.

In previous games this year, including the semifinal game against Crisp County the night before, the Panthers had an answer early in the second half. However, on this night, it was not to be. The Trojans exploded in the third quarter by scoring eight unanswered points to take a 37-23 lead. ASHS did not crack the scoreboard in the third quarter until Evans drained a three-pointer with a little less then three minutes left. However, that did not stop the onslaught of PCHS. The Trojans’ intense defensive pressure forced the Panthers into committing numerous turnovers and PCHS was able to capitalize by going on another big run to increase its lead to 44-28. With 4.6 seconds to go in the third quarter, Evans was fouled in the act of shooting and made both free throws, but the Trojans would have the final answer of the quarter. As the horn was about to sound, PCHS guard Edric Bailey threw up a shot from almost half court that hit the rim and bounced in to give the Trojans a 47-30 lead with eight more minutes to play. For the first time in a long time, the Panthers found themselves in unfamiliar territory: trailing by a double digit margin. They had eight minutes to mount a huge comeback to win a region championship. 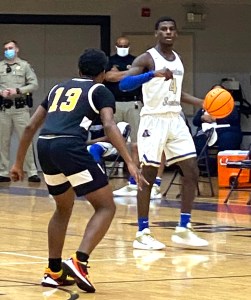 Over the first four minutes of the fourth quarter, ASHS was able to make some headway. The Panthers outscored PCHS 8-4 during this period and the last basket of that run came from Darian Mitchell off an assist from D.J. Hurley. However, the Trojans responded with a 7-2 run of their own to push their lead back up to 58-40 with 2:23 left.

Almost a minute later, the Panthers were able to get to within 14 points on a three-pointer by Brandon Pope. Then D.J. Hurley was able to score and complete a three-point play, cutting the ASHS deficit to 60-49 with 51.3 seconds left. The Panthers were trying to keep hope alive. 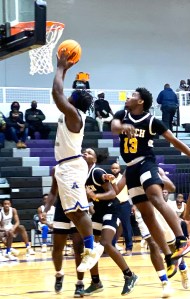 Americus-Sumter senior small forward Jordan Wiley (11) goes up to score against Peach County in the Region 2-AAA Championship Game. Wiley scored seven points in the loss to the Trojans.
Photo by Ken Gustafson

However, late game heroics would not take place for ASHS on this night, as the Trojans would go on to win 63-53 to win the Region 2-AAA Championship.

As a result, PCHS will be the #1 seed out of Region 2-AAA in the first round of the GHSA Class AAA State Tournament, while the Panthers will host their first round game as the #2 seed.