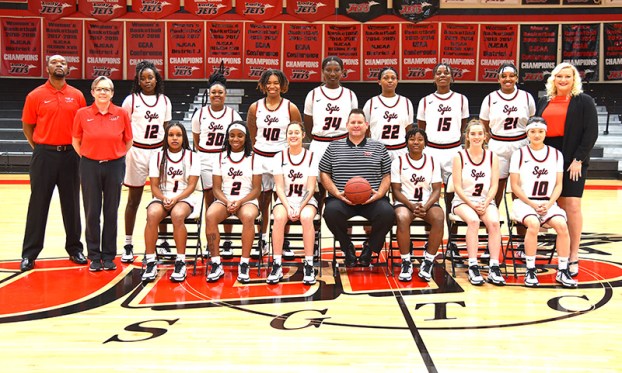 The 2020 – 2021 SGTC Lady Jets Basketball Team is currently ranked 2nd in the nation in the most recent NJCAA Division 1 National Poll. Photo by Su Ann Bird

AMERICUS – The South Georgia Technical College Lady Jets moved into 2nd place in the National Junior College Athletic Association (NJCAA) Division I women’s basketball national standings released February 15th, 2021 and are hoping to make history by moving into 1st place over the next few weeks.  This is the highest ranking ever for the Lady Jets who are currently 12 – 0 on the season.

In addition to the number two ranking nationally, the Lady Jets also had eight individual members to be singled out in the individual rankings and three members of the Jets earned national honors in the Division I rankings.  Both the Jets and the Lady Jets are currently in first place in the Georgia Collegiate Athletic Association (GCAA) standings.  The Jets are 5 – 4 overall and 3 – 0 in the conference.

“We are honored to be considered one of the top two teams in the country,” said South Georgia Technical College Athletic Director and Lady Jets head coach James Frey. “I think it speaks to the progress we have made throughout the years.  We’ve really tried to focus on being consistent year in and year out.  The only way we can attain that consistency is with the incredible support we get from our administration starting with Dr. Watford and his senior staff.

“We are only halfway through the season and I’m proud of the focus our young ladies have shown both on and off the court.  The Covid-19 pandemic has been an even bigger stress than basketball so it’s even more impressive that they have been able to produce at a high level on the court.  We’re asking them to basically have no life other than academics and basketball and they have really embraced it.”

The Lady Jets have five games over the next two weeks.  They face Wallace Hanceville and Georgia Highlands.  “There is a good chance both of these teams will be ranked when we play them,” said Coach Frey.  “They are both national tournament type teams and it will take an unreal effort for us to stay unbeaten.  After those games we still have six more conference games. We’ve adopted the motto, “One game at a time” and that will continue to be our focus.

Northwest Florida State College (7 – 0) is currently in the top spot in the Division I national poll.  They were ranked second last week, but when the top ranked Trinity Valley Community College and Chipola College (3) both lost, that allowed Northwest Florida State College and South Georgia Technical College to move up into the first and second place spots.

In addition to the 2nd place team ranking, South Georgia Technical College had eight individual players that were recognized nationally for their individual efforts.    Sophomore center Femme Sikuzani, who stands at 6’ 5” from Goma, DRC, earned national recognition in four different categories.  Sikuzani is the 4th best rebounder in the nation.  She has a total of 96 rebounds this season.  The national leader has a total of 103.

Two of her teammates, sophomores Hope Butera and Flora Ngasamputu also gained national honors for their rebounding efforts.  Butera is currently 13th in the nation with 79 rebounds this season and Ngasamputu is ranked 30th with 66.

Sophomore guard Veronica Charles was listed in two categories.  She is currently ranked 11th in the nation in steals per game with 4.2 per outing and 33rd in the nation in total points with 124.  Her teammate, sophomore shooting guard Imani McNeal from Locust Grove, GA, has scored a total of 136 points this season which allowed her to earn the 21st place ranking in the nation.   Sophomore guard Moe Shida earned the 25th place spot for accumulating 129 points so far this season.

Shida and teammate Maikya Simmons were tied for 40th in assists per game with an average of 4.5.  Freshman Abby Solway was the other Lady Jets listed and she is currently 50th in three-point percentage shooting hitting an average of 45.3 of her shots.

Three members of the SGTC Jets earned national recognition this week as they moved to 5 – 4 overall and 3 – 0 in the conference.  Sophomore forward Jalen Reynolds, 6’ 7”, is currently the 3rd best rebounder in the nation.  He has 97 total rebounds this season.  The leader has 111.  His teammate Marvin McGhee is tied for the 36th position with a total of 63 rebounds this season.

The third member of the Jets to shine nationally was freshman guard Joshua Pain. He is currently 43rd in the nation in free throw percentage shooting.  He is hitting 90% of his foul shots.

The Jets travel to Andrew College on February 16th for a 7 p.m. game and then host the 16th nationally ranked Georgia Highlands Chargers at 7 p.m. at home.  The Lady Jets will host Wallace State Community College on Monday, February 22nd at 5 p.m. in the Hangar.