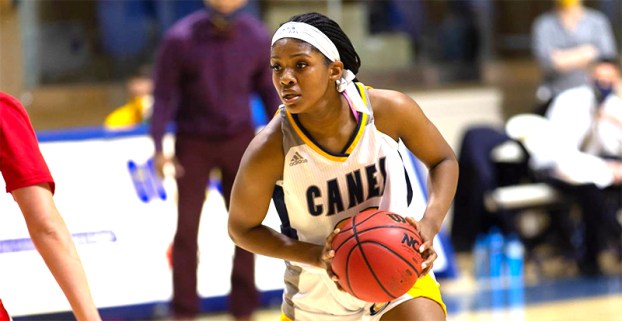 K’Shouri Hodge had a huge block with 28 seconds left in overtime that sealed the win for the Lady Hurricanes. Three GSW players finished in double-digit scoring, while Lex Chatman and Daelyn Craig both finished with double-doubles. It was Chatman’s sixth double-double this season.

Clayton State opened the game on a 9-0 run right into the middle of the first quarter. With 4:58 remaining in the opening quarter, Chatman was able to get GSW on the board. As both teams exchanged scores, GSW was able to get the score back down to one possession at 11-8 with 2:37 left in the first quarter. Chatman’s nine first quarter points helped GSW cut down the score as they trailed 16-13.  Jaleah Storr opened the second quarter with back-to-back layups as GSW (8-4, 6-3 PBC) took a 17-16 lead with 9:12 remaining in the half. As both teams exchanged scores, CSU was able to pull out a three point lead, 26-23, with 4:06 left in half. Yasmin Perez draining one free throw then after a missed shot, drained a deep three to give the Lady Hurricanes 31-29 halftime lead.

CSU (7-4, 7-4 PBC) drained a three from deep to open the third quarter as they retook the lead. That led to a 12-4 run by CSU that saw the Lady Lakers go up 41-35 with 6:07 remaining in the third. GSW returned with a 8-1 run on the own that saw them take the lead back. Throughout 15 lead changes, the Lady Hurricanes took a 55-51 lead going into the final 10 minutes as Perez drained three free throws.

GSW took their largest lead in the fourth quarter, 61-53, with 7:39 left in the game as they were fighting for the win. The Lakers were able to cut the lead down to one possession, 61-59, and two minutes later, they tied the game at 63 with 2:45 left in regulation. As teams exchanged leads, a layup by Chatman gave GSW a 67-65 lead with one minute remaining. After both teams missed layups, Clayton St. was able to tie the game and push the game into overtime. Craig opened overtime by draining two free throws for the lead by the Lakers tied the game back up. Chatman was able to push the lead by three, 72-69, by draining free throws. CST was able to take a 75-74 lead with 1:09 left in OT but GSW took the lead back with a layup by Storr with 27 seconds left. With 18 seconds left in the game, K’Shouri Hodge made a big block that prevented CSU from tying the game, which led to Chatman at the free throw line, winning the 79-78 game overtime game for GSW.

GSW finished with a strong 47-34 rebound advantage over Clayton St. as they also outshot them, going 42.9 percent (27-63) from the field while CST went 28-67 for 41.8 percent. Both teams drained only four three-pointers but the Lakers finished shooting 75 percent from the line while GSW shot 70 percent.

GSW Hurricanes storm to victory on a sensational Senior Night

By Keith Michlig   AMERICUS – GSW senior guard James Arnold, Jr. made the first shot of the game and... read more