AMERICUS – The Southland Academy Lady Raiders (15-3) started out somewhat slow in the first half against the Valwood Lady Valiants (VHS) in the Georgia Independent School Association (GISA) Region 3-AAA Semifinals. However, that all changed in the second half as the Lady Raiders did what they have done all year. They used their high-pressure defense to force VHS into committing numerous turnovers. SAR then in turn scored points off those turnovers and outscored the Lady Valiants 31-4 in the second half to secure a lopsided 55-16 win at the GSW Storm Dome on Thursday evening, February 18.

According to SAR Head Coach Ty Kinslow, the Lady Raiders might have had a bigger lead earlier in the game, but being that his club had a decisive advantage, as far as match ups were concerned, the Lady Raiders did not use their high-pressure defense early in the game like they normally do.

“We knew we had them outmatched a little bit. Some of that is my fault,” said Kinslow. “I pulled the reins in a little bit with them with a big game tomorrow night (Region 3-AAA Championship). I said, ‘Hey, we’re just going to back it up in here some’. That got us out of sink. That was really my fault. We talked about that at halftime and we decided to go play our regular basketball. Not only did we play great defense, we were blocking out. We were moving the basketball and that’s how we play. We were just trying to get ready for tomorrow night.” 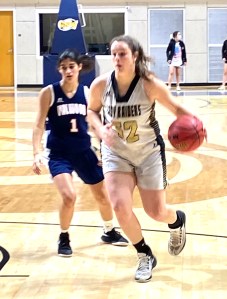 Southland Academy senior forward Holly McCain advances the ball down the court for the Lady Raiders. McCain scored four points in the win over VHS.
Photo by Ken Gustafson

All of the Lady Raiders played and 10 of them scored in this game. Riley Mitchell led all scorers with 19 points, which included three made three-pointers. Maddie Crisp chipped in nine points and Lauren Duke scored eight. Holly McCain chipped in four points, while Katie Rogers, Emma Kate Hayes and Reese Roland each chipped in three points. Morgan Weaver, Brooke Weisner and Mary Beth Easterlin each scored two points to round out the SAR scoring.

The Lady Raiders jumped out to an 11-2 lead in the first quarter, but VHS was not going away. Over the last couple of minutes of the first quarter, the Lady Valiants outscored SAR 7-6 and that run included a three-pointer at the buzzer by VHS guard Smith Shaw. 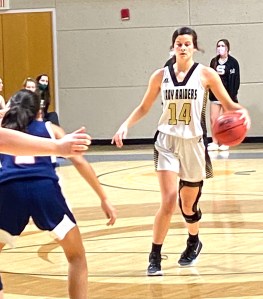 However, the Lady Raiders started to re-establish control in the second quarter. They went on a 7-3 run over the duration of the quarter to take a 24-12 lead at the half. At times during the first half, SAR went through periods where they struggled to score, but the defense of the Lady Raiders was able to keep VHS at bay. As they have dome all year and in previous years, the Lady Raiders used their defense to force numerous turnovers. As a result, the Lady Valiants were not able to take advantage of any of SAR’s scoring droughts in the first half.

During the first two minutes of the second half, the Lady Raiders went on a 6-0 run, which was capped off by a jumper from Mitchell. As the third quarter continued, the Lady Raiders continued to use their high-pressure defense to force turnovers. Their dominance on the defensive end was so complete that the Lady Valiants were unable to score a single point through the first six minutes of the quarter. 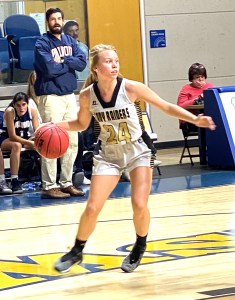 On the other hand, SAR got a three-pointer from Katie Rogers with a little over three minutes left in the quarter. Rogers’ three-pointer was part of another run by SAR that increased its lead to 40-14 by the start of the fourth quarter. 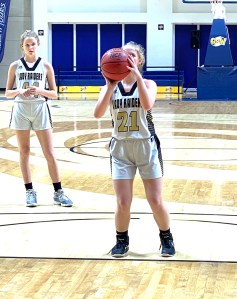 Even with the big lead, the Lady Raiders did not take their foot off the gas pedal. They continued to limit the Lady Valiants’ opportunities to score and got bench points from Emma Kate Hayes, Lauren Duke and Mary Beth Easterlin to close out the game.  The Lady Valiants (0-17) were led in scoring by Smith Shaw’s 12 points. 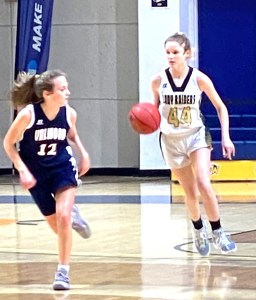 SAR will now turn its attention to tonight’s Region 3-AAA Championship Game against Brookwood (10-14). The Lady Warriors defeated Tiftarea Academy 65-47 in the other region semifinal. In the Lady Raiders’ last two meetings against the Lady Warriors, SAR won 52-29 in Thomasville and 43-27 in Americus. Tip off for tonight’s girls’ region championship at the Storm Dome is set for 7 p.m., followed by the boys’ region championship game featuring Southland and Brookwood at 8:30 p.m.