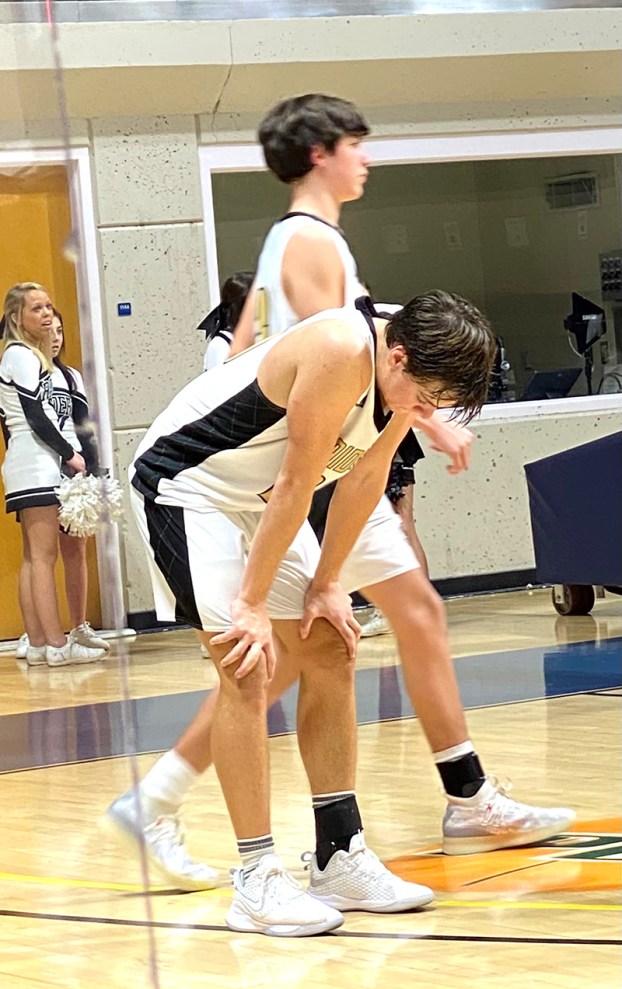 Southland Academy senior guard Owen Exley hangs his head in disappointment after the Raiders fall to Brookwood 48-46 in the championship game of the GISA Region 3-AAA Tournament. Exley scored six points on the night. Photo by Ken Gustafson

Raiders’ bid for a region championship falls short against Brookwood

AMERICUS – After a slow start in the first half, which saw the Southland Academy Raiders score just 15 points, SAR came alive in the second half of the Georgia Independent School Association (GISA) Region 3-AAA Championship Game against Brookwood (BHS) at the GSW Storm Dome on Friday, February 19. Much of this was due in part to the hot shooting of SAR senior point guard Nathan Duke. As the second half continued, the Raiders, as they had done the night before in their region semifinal game against Tiftarea Academy, made plays that turned the momentum of the game in their favor. Then with a little over a minute to go, Duke drilled what many SAR fans in attendance thought would be the crucial three-pointer that would lead the Raiders to victory. However, the Warriors came up with a three-pointer of their own that would end up being the game winner. With 4.7 seconds left and SAR leading 46-45, BHS guard Dallas Forsyth drained the Warriors’ only three-pointer of the fourth quarter, but it was the game-deciding basket. The Raiders had one last chance to tie the game or win it on a three-pointer, but Max Foster’s running one-hander clanked the back of the rim as time expired and the Warriors left Americus with a 48-46 victory over SAR in the finals of the GISA Region 3-AAA Tournament.

The Raiders (17-4) came into the tournament as the #1 seed out of Region 3-AAA, but with the loss to BHS, they will be the #2 seed in the first round of the GISA Class AAA State Tournament to be played Tuesday and Wednesday, February 23-24. 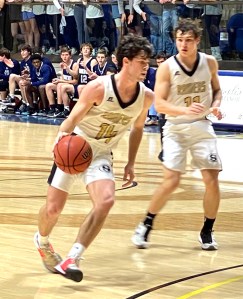 Duke led SAR in scoring with 17 points and connected on three shots from beyond the arc, all of them coming in the second half. Max Foster scored all of his nine points in the second half to help give the Raiders a chance to pull off the victory. Carmelo Volley scored seven points on the night, including two three-pointers, while Owen Exley was held to just six points. Buddy Brady scored five points and Carlos Tyson chipped in two points to round out the Raiders’ scoring.

In both their region semifinal game against Tiftarea Academy on Thursday and in the region championship game against BHS, the Raiders struggled to score in the first half. While they were able to overcome their first half struggles in the semifinals to win over the Panthers, they were not as fortunate in their comeback bid against the BHS Warriors.

Both teams shot well from the foul line. BHS went 9 of 13 from the charity stripe, while the Raiders shot 8 of 12. However, in the closing seconds of the game, Max Foster was at the line to shoot one and one with his team up 46-45. Unfortunately for Foster and the Raiders, he missed the free throw and it kept the door open for BHS to get the game winning three-pointer from Forsyth.

With the win, BHS (11-13) claims the Region 3-AAA Championship and will be the #1 seed in the first round of next week’s GISA Class AAA State Tournament. 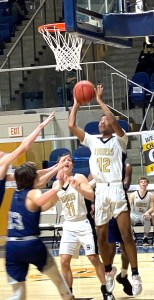 Southland Academy sophomore forward Carlos Tyson (12) goes up to score against Brookwood. Tyson scored two points in the loss to the Warriors.
Photo by Ken Gustafson

As was the case in Thursday night’s semifinal game, the Raiders got off to a very slow start. They tried to be patient in their half court offense and had a slow and methodical approach as they tried to work for the high percentage shot.

However, they struggled to make outside shots against the Warriors’ defense and were unable to score on the inside as well. While the Raiders were struggling, BHS was on fire from beyond the arc. The Warriors were able to knock down four three-pointers in the first half and were able to score in transition as well. With 5:10 left in the second quarter, Rodge Waldrop was able to score on a fast break basket to give BHS a 20-8 lead. This prompted SAR Head Coach Rundy Foster to call a timeout at this juncture of the game. 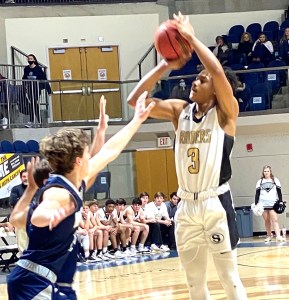 However, things did not change much for the Raiders out of the timeout as BHS went on a 7-4 run over the next three minutes. Then with 2:03 to go before halftime, Kelton Lewis drained his third three-pointer of the contest to give the Warriors a 30-12 lead. Jack Boltja would later get fouled on a fast break attempt and sink two foul shots, but Carmelo Volley answered with his second three-pointer of the game, making the score at halftime 32-15 in favor of BHS.

For the Raiders, the first half could simply be summed up as a half in which the shots were not falling. The Warriors, on the other hand, were able to connect on four three-pointers and were able to drain other high percentage shots, including a couple of fast break baskets. The Raiders, just like during the first half of Thursday night’s game, were struggling in all of those shooting categories. Volley was able to connect on two three-pointers in the first half, but those were the only shots from beyond the arc that the Raiders connected on during the half.

At halftime, SAR found itself in a familiar position. The Raiders were able to turn things around in the second half of their region semifinal game against Tiftarea Academy the night before, and they would have to do the same thing against the Warriors in order to win the region championship. 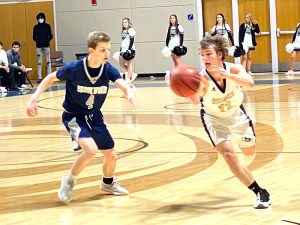 Southland Academy senor shooting guard Max Foster (11) scored all of his nine points in the second half to try to lead the Raiders to another come-from-behind victory against Brookwood in the GISA Region 3-AAA Championship Game.
Photo by Ken Gustafson

Over the first two minutes of the third quarter, the Raiders showed a glimmer of hope. Max Foster came to life by scoring his first two points of the game via dribble penetration, but BHS still maintained a double-digit lead at 36-23.

However, Duke came alive. He drilled SAR’s third three pointer of the game and then got a steal and scored to bring the Raiders to within eight at 36-28. That play electrified the SAR crowd in attendance, and as the third quarter was winding to a close, the momentum was slowly turning in the favor of SAR.

With 50 seconds left in the quarter, Lewis quieted the SAR faithful by scoring and sinking the free throw to complete a three-point play, but Duke responded by getting fouled and knocking down two foul shots of his own to keep the Raiders within striking distance. After three quarters of play, SAR trailed 39-31 and the Raiders had eight more minutes to pull off another come-from-behind victory.

In the first 15 seconds of the fourth quarter, Duke struck again with another three-pointer, bringing SAR to within five. Both teams would trade baskets over the next couple of minutes before Foster drilled his first three-pointer of the night to bring the Raiders to within one at 40-39. The Warriors would later go up by four when Lewis scored via dribble penetration, but Foster rose to the occasion again with another basket to bring the Raiders back to within two at 45-43.

However, this was Duke’s night to shine. With about 1:20 left to play, he gave SAR a 46-45 lead on another three-pointer. BHS tried to respond with a basket at the other end, but the Raiders were able to get a stop. 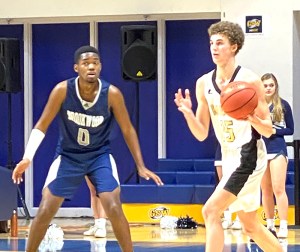 With a little more than 20 seconds left, the Raiders had the ball and Foster was fouled. He would go to the line to shoot a one and one and would have a chance to give SAR a three-point lead. However, Foster missed the first free throw and BHS got the rebound. It was now the Warriors’ turn to try and pull off the victory.

During the last 12 seconds of the game, BHS worked the ball around the SAR defense until they found Dallas Forsyth on the left side. With 4.7 seconds left, Forsyth drilled a three-pointer to give BHS a 48-46 lead, but there were still 4.7 seconds left to play, which was plenty of time for the Raiders to get a tying basket or a winning three-pointer. Coach Foster called a timeout to set up one last play to keep the Raiders’ chances of a region champion alive. 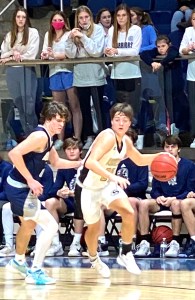 Out of the timeout, Max Foster was able to dribble into the lane and got off a running one–hander as the horn sounded, but his shot hit the back of the rim and bounced out. Just like that, the Warriors had won the Region 3-AAA Championship by the score of 48-46.

Lewis led BHS in scoring with 15 points and Forsyth was also in double figures with 11. Boltja almost cracked the double figures mark by chipping in eight points for the victorious Warriors.

As for the Raiders, they will have to quickly shake off the disappointment of losing the region championship. As the #2 seed out of Region 3-AAA, they will host the #3 seed out of another region on Tuesday, February 23. Time and opponent are still to be determined.