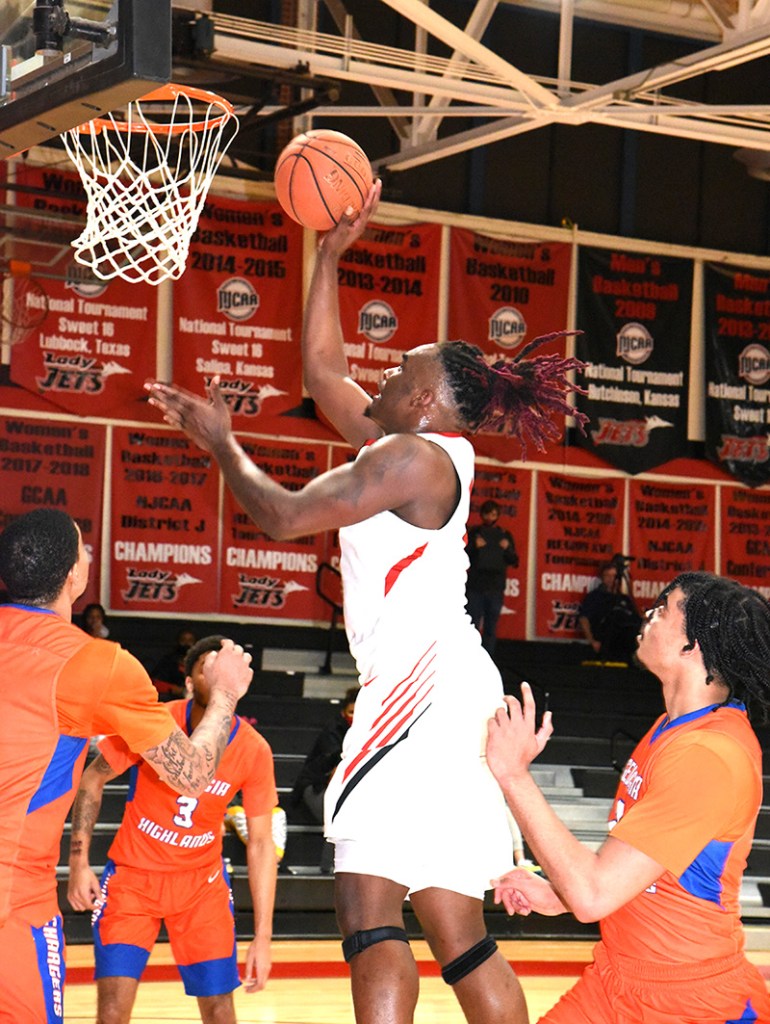 Jalen Reynolds (3) dominated on both ends of the court against Georgia Highlands on Saturday including making the last second jump shot to give the Jets the 87 – 85 victory over the 16th ranked Chargers. Photo by Su Ann Bird

The win Saturday allowed the Jets to move into a tie for second place in the Georgia Collegiate Athletic Association (GCAA) conference with Albany Tech.  Both are 5 – 1 in the conference and are one game behind South Georgia State College, which is the only unbeaten team in the league at 5 – 0.  GHC is now in third place with a 3 – 1 GCAA record and a 5 – 1 overall record.  The Jets are 7 – 5 overall with four of their five losses coming at the hands of nationally ranked teams.

“This was one of the best basketball games, I have had the privilege to be a part of,” said South Georgia Technical College Jets interim head coach Chris Ballauer.  “After the game on Thursday night, Coach Harris and I stayed and watched our game on video.  We made some adjustments that we thought would give us a chance to win.

“Georgia Highlands is a really good team, probably the most talented team in our conference.  Our guys have been awesome all season about buying into everything we are doing as a team and I really think that helped us on Saturday.  We had four guys in double figures with Jalen Reynolds, Will Johnson Marvin McGhee, and Jordan Stephens.  Our bench brought a lot of energy on Saturday and it really carried over to the guys on the court.  It was a great team win and I couldn’t be prouder of these guys and how hard they work each and every day,” added Coach Ballauer.

The Jets and the Chargers battled back and forth for the lead throughout the first half.  The Jets were up by two with seconds left on the clock when GHC sank its seventh three-point shot as the buzzer sounded to pull ahead 42 – 41 at the half.

The Chargers were on fire in the first half, hitting seven of 12 three-point field goals, and 16 of 31 overall.  The only place they were lacking was on the free-throw line.  They were 3 of 7 while SGTC hit 10 of 10 from the foul line.

Jalen Reynolds dominated the paint on both ends of the court for the Jets.  He led the team with 21 points on the night including the last second shot and then had 14 rebounds, nine on the defensive end of the court.  He also had a steal and three blocked shots.

Freshman point guard Will Johnson was the second leading scorer for the Jets with 19.  He also had six rebounds, two assists and a steal on the night.  Close behind him was freshman guard Marvin McGhee with 18 points, six rebounds, and a steal.  Sophomore guard Jordan Stephens was the other Jet to score in double-digits.  He came away with 13 points, two rebounds, and one steal on the night.

Sophomore forward Tobais Long tossed in eight points and pulled down five rebounds for the Jets and then Justice Hayes and Joshua Pain both added three points.  Nikola Sasaroga closed out the scoring with two points.

Chris Wright led Georgia Highlands with 32 points on the night.  He was five of seven from the three-point line.  Keandre Bowles and Joel Pullen had 11 points each for the Charges to close out their double-digit scoring.

The number two nationally ranked Lady Jets were scheduled to play tonight at 5 p.m. but the game with Wallace State Community College has been cancelled due to two Wallace State players testing positive for COVID.  Coach Frey is trying to add another game this week since the Lady Jets had last week off after Southern Crescent cancelled its women’s season.  The Lady Jets will face Georgia Highlands at home on Tuesday, March 2nd at 5:30 p.m. and then travel to Rome for rematches on Friday, March 5th at 5:30 p.m. and Saturday, March 6th at 2 p.m.