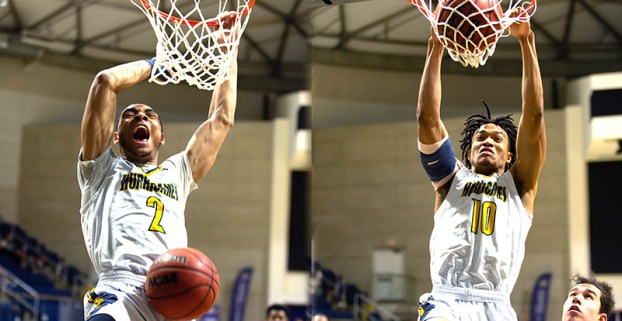 AMERICUS – The Georgia Southwestern State University men’s basketball tea (GSW) was able to add two games with Fort Valley State on its schedule and won both of those games in dominating fashion. On Saturday, February 20, the Hurricanes thrashed FVSU 95-67 in the Storm Dome. Two days later on Monday, February 22, GSW drubbed the Wildcats again by the score of 93-47. The second game was also played at the Storm Dome.

The Hurricanes have now won six of their last seven contests and their record improves to 12-4 on the season. FVSU opted out of its Southern Intercollegiate Athletic Conference season due to COVID concerns, but made the choice to play the Hurricanes in a pair of non-conference games.

In the first game between the two clubs, the visiting Wildcats got the Hurricanes’ attention when they jumped out to a 19-11 lead. GSW answered with an 11-2 run sparked by a pair of Jordan Furlough three-pointers. Tristan Davis gave FVSU its final lead of the night when he answered with a three-pointer on the ensuing possession, but Donte Tatum scored on GSW’s next trip down the floor with 8:14 to go before the half and the Hurricanes never trailed again. Despite the shift in momentum, it wasn’t until the four-minute mark when GSW started to finally pull away. The Hurricanes led 44-32 at the break and would stretch their margin to 20 points with 13:09 remaining in the game.

GSW turned in its best shooting performance of the season, making 10 of 20 from long range and 64.2 percent overall (34 of 53). GSW played unselfish with 24 assists, which is their most in a game since January 15 of last year. Points in the paint heavily favored the Hurricanes (42-22) and the fast break points advantage was lopsided in favor of GSW at 23-6.

Tatum churned out his eighth 20-plus scoring night with a game-high 24 on Saturday. The Raleigh, NC native sank 10 of 15 shots, including 3 of 4 from three-point range. He secured six rebounds and dished four assists. Jarrett Adderton scored 13 points and Devon Higgs made all five of his shot attempts, finishing with 12 points and leading all players with three steals. Kevin Kone was perfect by connecting on 5 of 5 shots as well. Kone scored 11 points. Kahlon Whitley, the Peach Belt Conference assists leader, tallied a dozen dimes.

FVSU was led in scoring by Malik Clark’s 19 points and Andrew Ziegler added 17. Gregory Holloway fell a rebound shy of a double-double with 10 points and nine boards.

In Game 2, the Hurricanes took care of business early. They jumped out to a 48-24 lead at the half and continued their onslaught in the second half by outscoring the Wildcats 45-23 on their way to the 93-47 victory.

Six Hurricanes scored in double figures. Jarrett Adderton led all scorers with 17 points and he grabbed a total of eight rebounds, almost notching a double-double.

Donte Tatum poured in 13 points and Kahlon Whitely had 12. Jordan Furlough came off the bench to score 11 points and he tallied four rebounds on the night.

AS for FVSU, the Wildcats were led in scoring by Andrew Ziegler, who had nine points.

Up next for the Hurricanes is an important road trip up to Columbus on Wednesday, February 24, to take on PBC opponent Columbus State University (5-7, 5-6 PBC). On Saturday, February 20, the Cougars very nearly upset NCAA Division I opponent College of Charleston, but lost 86-83 in overtime. Tip off for Wednesday’s game is scheduled for 7:30 p.m. The Hurricanes will then finish the regular season with a trip up to the North Georgia Mountains on Saturday, February 27, to take on Young Harris College (5-6, 5-5 PBC). Tip off for that game is scheduled for 1:30 p. In the last matchup between the Hurricanes and YHC at the Storm Dome on Wednesday, February 10, GSW pulled off a 108-105 come-from-behind victory in overtime over the Mountain Lions.

This year, due to COVID-19, the Peach Belt Conference Tournament will be restricted to four teams and the Hurricanes (12-4, 8-4 PBC) are currently in third place in the PBC standings. With two games to go, The Hurricanes trail second place Georgia College (9-2, 9-2 PBC) and conference leader Flagler College (11-2, 9-1 PBC).

Lady Jets remain at #2 in NJCAA Division I national poll