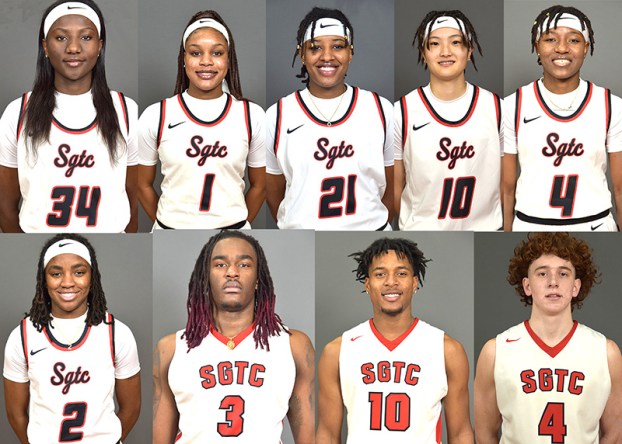 Lady Jets remain at #2 in NJCAA Division I national poll

AMERICUS – The South Georgia Technical College (SGTC) Lady Jets keep their #2 ranking in the National Junior College Athletic Association (NJCAA) Division I women’s basketball national standings released February 22, 2021. This is the highest ranking ever for the Lady Jets, who are currently 11 – 0 on the season.

Northwest Florida State College remains the #1 team in the nation this week with an 8 – 0 record.  South Plains College, Chipola College, and Jones College also maintained their spots in the top 5 again this week.  The Lady Jets will host the 5th ranked Jones College Bobcats in a 3 p.m. match-up in the hangar on Wednesday, February 24.  Both teams had cancellations this week so the game Wednesday was not on the schedule but will feature two top 5 teams in a battle to remain unbeaten.  Jones College is 7 – 0 on the season.

In addition to the number two ranking nationally, the Lady Jets also had six individual members to be singled out in the individual rankings.  The SGTC Jets also received votes to be included in this week’s national ranking and had three members earn individual national honors in the Division I rankings.  The Lady Jets are currently in first place in the Georgia Collegiate Athletic Association (GCAA) standings at 6 – 0 and the Jets are tied for second place with Albany Tech at 5 – 1.  South Georgia State is currently first with a 5 – 0 and 11 – 0 record.  The Jets are 7 – 5 overall. 5 – 4 overall.

“It is an honor to be considered as one of the top two teams in the country,” said South Georgia Technical College Athletic Director and Lady Jets head coach James Frey. “But now we have to take everything one game at a time and concentrate on remaining there and moving up.

“We have a tough game against Jones College on Wednesday and this will let us know where we are.  They have a great problem and this is a test for our young ladies,” said Frey.  “We will need to play like a number one or number two team to win.”

In addition to the #2 team ranking, SGTC had six individual players recognized nationally for their individual efforts.  Sophomore center Femme Sikuzani, who stands at 6’ 5” from Goma, DRC, earned national recognition in three different categories.  Sikuzani dropped from the fourth best rebounder in the nation to 12th.  She has a total of 96 rebounds this season, while the national leader has a total of 129.

Her teammate, sophomore Hope Butera, 6’ 3” forward from Kigali, Rwanda, is currently 23rd in the nation with 79 rebounds this season.  She was 13th last week.

Three members of the SGTC Jets earned national recognition this week as they moved to 7 – 5 overall and 5 – 1 in the conference.  Sophomore forward Jalen Reynolds, 6’ 7”, is currently the second best rebounder in the nation.  He has 124 total rebounds this season.  The leader has 136.  His teammate, Marvin McGhee, is tied for the 42nd position with a total of 74 rebounds this season.

The Jets did receive an honorable mention is this week’s standings despite their five losses.  Four of those losses came to nationally ranked opponents.  This past week the Jets split with Georgia Highlands College.  The Charges were ranked 16th before the loss to the Jets but are now 21st.  Another GCAA opponent, South Georgia State College, is currently ranked 19th nationally with an 11 – 0 record.

The Lady Jets host the 5th-ranked Jones College Bobcats on Wednesday, February 24, in the Hangar at 3 p.m. They will then travel to Hanceville, Alabama on Saturday, February 27, to play Wallace State Community College at 2 p.m. CST.  The Lady Jets will then host Georgia Highlands on Tuesday, March 2, at 5:30 p.m. in the Hangar before traveling to Rome for rematches on March 5 and 6 at 5:30 p.m. and 2 p.m.

The Jets host Southern Crescent at 3 p.m. in the Hangar on Saturday, February 27 and then travel to Griffin to take on Southern Crescent on Tuesday, March 2. They will then travel to Douglas, GA on Thursday, March, 4 to play South Georgia State College.  Both games are at 7 p.m.  The Jets will host South Georgia State College on Saturday, March 6, at 3 p.m.