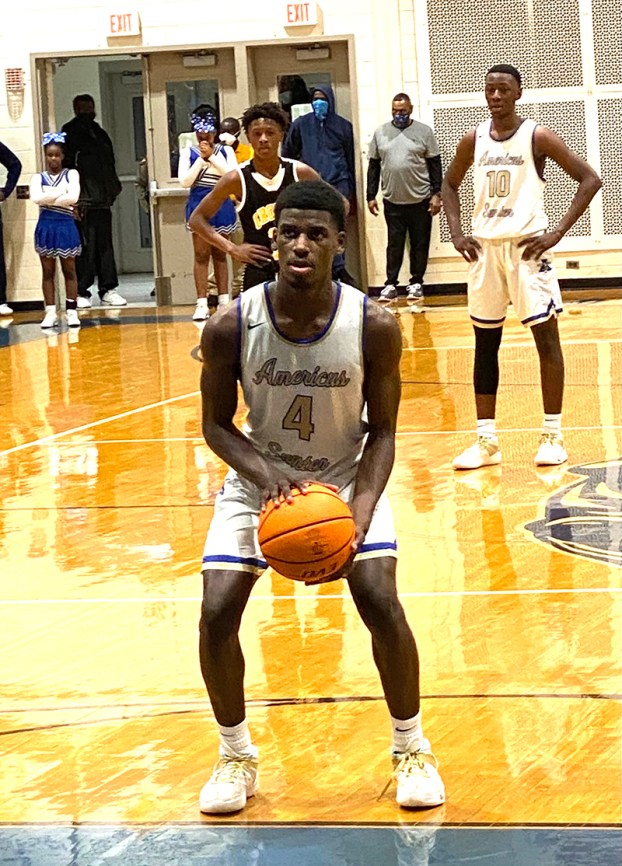 Americus-Sumter sophomore point guard Cameron Evans sank four free throws in the fourth quarter to help lead the Panthers to a 55-50 victory over Groves High School in the first round of the GHSA Class AAA State Tournament. Photo by Ken Gustafson

AMERICUS – It has been said that to win basketball games, especially in postseason play, you have to do the little things. In Wednesday night’s first round GHSA Class AAA state playoff game between the Americus-Sumter Panthers (ASHS) and Groves High School (GHS), one of those “little things” the Panthers did in the fourth quarter that proved to be a crucial factor in their 55-50 victory over the Rebels was making free throws. To be more specific, it was the clutch foul shooting of Cameron Evans. The ASHS sophomore point guard sank four free throws in the fourth quarter to help lead the Panthers (16-4) to the victory over GHS in the first round of the GHSA Class AAA State Tournament Wednesday evening, February 24, at the Panther Den. 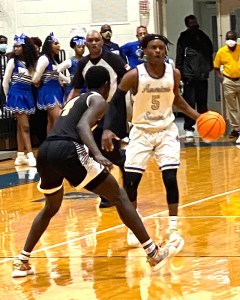 Americus-Sumter senior small forward Michael Johnson with the ball for the Panthers.
Photo by Ken Gustafson

While Evans made the majority of those all important free throws during the final eight minutes, it must also be mentioned that his fellow teammate, ASHS sophomore shooting guard Brandon Pope, went 1 for 2 from the line in the fourth quarter to complete the five point margin of victory. Nevertheless, Evans’s foul shooting provided most of that five-point cushion, and in the eyes of ASHS Head Coach Johnny Genwright, the sophomore stepped up on the big stage.

“He made some big plays down the stretch,” said Genwright. “I mean, he looked like an advanced point guard as a sophomore. Groves was a great team. They have some big players. They blocked a lot of shots. We missed a lot of shots in the first half, but my guys kept fighting and pulled it out. We had a lot of great defensive stops from other guys and everybody just played.”

As a team, the Panthers made 18 of 28 free throws on the night, while the Rebels were 12 of 17 from the charity stripe.

Evans led the Panthers in scoring with 18 points and went 6 for 8 from the foul line in the game. He also connected on two three-point attempts. Both Jordan Wiley and Keldrick Flemming poured in eight points and Brandon Pope had six points for the Panthers in the winning cause.

The Panthers fell behind early to GHS 7-2. However, they responded with four straight points and cut the deficit to one. GHS countered with a 7-0 run, but ASHS outscored the Rebels 5-2 during the remainder of the first quarter and trailed 16-11 at the quarter’s end.

During the first four minutes of the second quarter, the Panthers were able to outscore GHS 10-8 to get to within three at 24-21, but the Rebels were able to push their lead to 28-22 on two free throws from Rasheen Johnson. With 57.8 seconds left and GHS leading 30-25, Flemming had the opportunity to bring his team to within three, but he missed two free throws. Fortunately for ASHS, Kyric Davis was able to make one of two foul shots with 31 seconds left to bring the Panthers to within four. Khari Manning responded for GHS with two made foul shots, but Evans was able to knock down two free throws of his own with 0.9 seconds left before halftime to bring ASHS to within four at 32-28.

Evans scored 12 of his game total of 18 points in the first half to lead the Panthers’ offense. 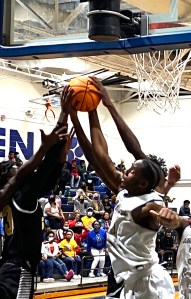 Over the first three minutes of the final quarter, both teams struggled to score, but Darian Mitchell was able to hit a short jumper to give ASHS a 46-40 lead.

Then with a little less than four minutes to play, Mitchell came up big again with a short hook shot to give the Panthers a 48-42 lead. Over the next couple of minutes, both teams traded baskets, but Evans gave ASHS a 51-46 lead when he knocked down two free throws with 1:31 left. The game was going down to the wire and would be decided on “little things” such as free throws.

However, the Rebels responded by scoring three unanswered points, prompting Genwright to call a timeout with 59.3 seconds left. 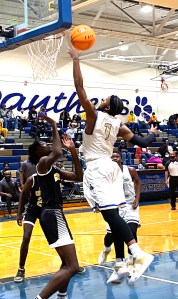 Out of the timeout, Evans was able to give ASHS a 53-49 lead when he drove into the lane and scored, but GHS guard Omarrie Grant got fouled and made one of two foul shots to bring the Rebels to within three. 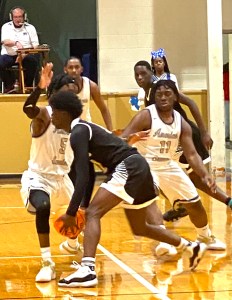 GHS then forced a turnover, but on the inbounds pass, the Rebels’ attempt to throw a lob pass into their big man at the basket was intercepted by the Panthers. Evans would later get fouled with 8.2 seconds left and sank both free throws to secure the hard-fought 55-50 win for ASHS.

With the first obstacle in their quest for a state championship behind them, the Panthers will now focus on their second round opponents; the Razorbacks of Cross Creek (21-4). CCHS won its first round game over Tattnal County 92-55. Being that CCHS is the #1 seed out of Region 4-AAA, the Panthers will travel to Augusta to take on the Razorbacks on Saturday, February 27, at 6:30 p.m. 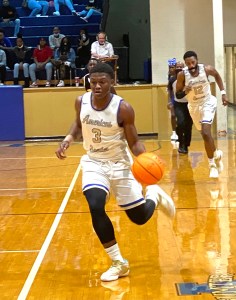 Americus-Sumter senior forward Keldrick Flemming (3) scored eight points in the Panthers’ 55-50 win over Groves in the first round of the GHSA Class AAA State Tournament.
Photo by Ken Gustafson

Should the Panthers pull off the road victory, they will face the winner of the game between Greater Atlanta Christian (GAC) and LaFayette in the quarterfinals on either Tuesday or Wednesday, March 2 or 3.

Wildcats’ first inning explosion leads them to victory over Manchester